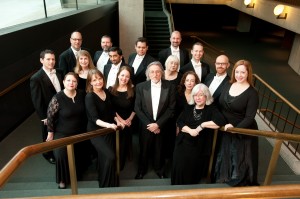 The New York Virtuoso Singers, Harold Rosenbaum, Conductor and Artistic Director, will present the first concert of their 25th Anniversary season on Sunday, October 21, 2012 at 3:00 PM at Kaufman Center’s Merkin Concert Hall, 129 West 67th St. (btw Broadway and Amsterdam) in Manhattan. This will mark their return to the hall where they presented their first concert in 1988.

Special guests will be Brent Funderburk, piano and the Canticum Novum Youth Choir, Edie Rosenbaum, Director. A pre-concert discussion with several of the composers will begin at 2:15 PM. More about this concert at http://kaufman-center.org/mch/event/the-new-york-virtuoso-singers.

Tickets for the October 21 concert are $25/$15 students. For tickets or more information, call Merkin Concert Hall at Kaufman Center at 212-501-3330 or visit http://kaufman-center.org/mch/.

More about them at http://www.nyvirtuoso.org/aboutus.htm. Join their Facebook page at http://www.facebook.com/pages/The-New-York-Virtuoso-Singers/130509011774.