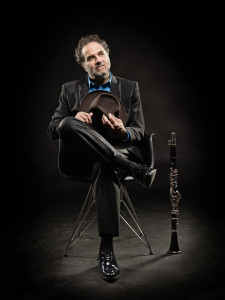 Clarinettist David Krakauer, a major voice in both contemporary classical music and modern klezmer, will be performing an exciting and eclectic series of concerts this coming week at The Stone (September 24-29), featuring several of his current collaborative projects. This week long residency will offer a chance for audiences to hear all the sides of David’s artistry, and to enjoy the work of some very cool guest artists as well. In the following interview he discusses this coming week, his musical history, and some of his other fascinating projects.

CD: David – you are known around the world as a classical clarinetist, and also as a leading innovator in the world of Jewish klezmer music. Tell us a little about this “double life” — what is your history with these parallel paths, and how do you see each as a manifestation of your artistic voice? How, when, and why do you bring them together?

DK: I didn’t grow up playing or hearing klezmer music as a kid. But when I came to it, I was in my early thirties and somehow had both the maturity to understand the emotional impact of the music plus some kind of concept of why I was choosing to embark on that musical journey. Basically at the beginning, I just started to play klezmer as a pure search for cultural identity that was totally separate from my professional musical life. And fortunately my early musical education had fully equipped me to embrace an “off the page” style of music. Already during the time I attended the High School of Music and Art in New York City I was lucky enough to have had a musical education in both classical and jazz. When I was 15 I started studying with Leon Russianoff, one of the greatest clarinet teachers of all time. By the time I started working with him in the early 70s, his former students included many of the top orchestral clarinetists in the country like Stanley Drucker, Franklin Cohen, Michelle Zukovsky etc. But in addition he taught the great jazz clarinetist Jimmy Hamilton (best known for his illustrious tenure in the Duke Ellington band) and a huge array of players from all walks of the music business. So Russianoff had a very open mind and was anything BUT a “stuffy” classical teacher. His mix of incredible rigor with a lovely, easy-going looseness was perfect for me and set the stage for the career I have today. As far as the jazz side of things goes, I had the great fortune to meet the incredible composer/pianist Anthony Coleman when we were students together at Music and Art. He asked me to join his band that was doing a huge spectrum of jazz repertoire ranging from Jelly Roll Morton to Monk to free jazz (in addition to Anthony’s music). Covering so many styles of jazz was actually rather unusual at that time, and it was a tremendous experience.

But when I went to college, I kind of had a crisis of confidence. I ended up abandoning jazz and deciding to focus almost exclusively on classical music. In fact, I think at the time I was scared that I wouldn’t be able to find a personal voice as an improviser. I worked very hard in classical music and excelled; but was always tremendously conflicted about making that choice. It would take many years for me to sort that all out. In any case, right out of school I spent ten years freelancing doing chamber music, contemporary classical, orchestral playing and some recitals here and there. After a while I made some headway with some very prestigious associations like the Marlboro music festival, a woodwind quintet that won the Naumburg Chamber music award, a New York recital debut as a winner of the Concert Artists’ Guild, chamber music with a wonderful group of people in the NY Philomusica and countless concerts with many of the New Yorks’ new music groups such as Continuum and the Da Capo Chamber Players.

It was a very rich and busy life, but I got to a point in my early 30s where somehow I felt like something was missing and I had thrown the baby out with the bath water. I knew at that point I needed to return to the world of improvising and non-written music. So through a series of chance meetings and coincidences (that in retrospect I see I was somehow directing myself towards) I came to klezmer music. At first I was just doing it for fun. And in the same moment I found myself connecting to my Jewish roots for the first time. It was exhilarating. After a few months of doing a bunch of very low key gigs my name came to the attention of the Klezmatics and they asked me to join. It was during that time where I started to develop my own original sound and find my own voice. The conflict I had felt for over 15 years was finally resolved and klezmer became a foundation for me to create a musical home for myself.

I did two recordings and countless tours of Europe with the Klezmatics before I left the band to form my own group in the mid-90s. And that has all launched me on the path that I’m still following today. In addition to touring with my own band, it’s fantastic to have an opportunity to bring it all together by working with composers who have given me room to be myself within their compositions. Recording and performing Osvaldo Golijov’s monumental composition “The Dreams and Prayers of Isaac the Blind” with the Kronos is a notable example. Plus nowadays I have more and more chances to be a soloist with fantastic symphony orchestras playing pieces that straddle both worlds by composers like George Tsontakis, Wlad Marhulets, Ofer Ben-Amots and Mohammed Fairouz. I’ve also enjoyed incredible collaborations with the Montreal based beat architect Socalled, the renowned cellist Matt Haimovitz, John Zorn and the great master of funk Fred Wesley. Musically I feel like I’m in an incredibly exciting place where I can bring all the diverse elements of my universe together with so many incredibly rewarding projects.

CD: Your Stone residency really seems to be something of a self portrait in that you have chosen to showcase a different side of your artistry each night. We’ll hear your klezmer band, we’ll hear you playing John Zorn’s music, some improv, and some chamber music. Can you tell us a little about the concepts behind each night?

DK: The Stone residency coming up next week is an amazing opportunity for me to offer a cross section of many of my major projects. During the first three nights a number of the musicians who have worked with me for many years will be on board. After having played so much together, there are times when we’re virtually mind-reading. Joining me in various configurations will be Sheryl Bailey on electric guitar; Jerome Harris on bass; Michael Sarin on drums; Will Holshouser on accordion; and Keepalive on sampler.

-Tuesday 9/24 will be a show with my Acoustic Klezmer Quartet. We’ll do an “unplugged” mix of traditional klezmer pieces done with my own quirky spin mixed with my compositions that all come from the story about my particular musical/personal journey.

-On Wednesday 9/25 I’ll present my arrangements of a group of pieces from John Zorn’s Book of Angels Volume 3. John selected these pieces specifically for me and this is a great chance to pay tribute to a musical association I’ve had with Zorn for over twenty years.

-Thursday 9/26 will be a performance with “Ancestral Groove” which is my current touring band.

I decided to change my band’s name from “Klezmer Madness”, because for me at this point, klezmer no longer seems to encompass all that I’m doing now. Klezmer will always of course be part of my music, but the title “Ancestral Groove” seems to better reflect the totality of my story.

-On Saturday 9/28 I’ll be doing an evening of improvisation with the incredible new music singer Helga Davis, the fantastic former cellist of the Kronos Quartet Jeffery Zeigler and the astonishing violinist/electronics wizard Todd Reynolds.

-The final concert on Sunday 9/29 will feature performances in both sets of the aforementioned “Dreams and Prayers of Isaac the Blind’ by Osvaldo Golijov. I’ve been a champion of this work since 1994 and am delighted to have a chance to play it in New York once again. Jeff Zeigler will join once again in addition to a tremendous super group including the amazing Margaret Dyer on viola and Abigale Reisman on violin. Plus I’m so delighted that you , Cornelius Dufallo, will also be a part of it bringing your tremendous artistry to this ensemble !!!!

All in all I’m super excited about this residency and can’t wait to get underway!

CD: You have a new project called “The Big Picture,” in which you will be re-interpreting some of the great film scores of all time. Please share with us how you came up with this project! I think you describe it as a “new phase” for you – how so?

DK: “The Big Picture” is a multi-media concert with a six piece band interpreting music from iconic films that (as we find out during the course of the performance) all have Jewish content. There’s music from the soundtracks of the obvious films like “The Pianist” and “Sophie’s Choice”…but there’s also music from Woody Allen films like “Midnight In Paris”, “Radio Days” and “Love and Death” that include jazz standards and pieces by Sidney Bechet and Prokofiev. And then there are pieces from Mel Brooks….and from Randy Newman. And more! So the range is pretty incredible. With the six piece band of tremendously poetic musicians we’re able to bring a special playfulness and intimacy to all this music. It was a blast to make the CD. Now we’re in the phase of producing a film that will accompany the music. This whole show will launch in Jan-Feb at the museum of Jewish Heritage down in Battery Park. I just heard the finished master of the CD the other day…and as I listened to this incredible selection of pieces fill the room it felt like I was going through a whole journey of the Jewish experience for the last 120 years. So yes… It’s quite different from anything I’ve ever done before, but at the same time it’s a continuation of my story and the search for identity that I’ve been involved with for the past 25 years. I put this all together with an extremely talented team and am extremely excited to bring this project out into the world to share with the public in the next few months.

CD: Do you have any words of wisdom for young musicians?

DK:  I often say the following to young musicians :

Explore as much diversity in music as possible!