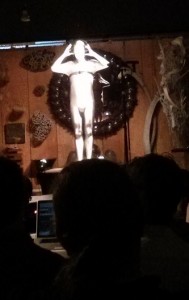 On a hot September 7th Saturday night, People Inside Electronics  and LA Sonic Odyssey  presented bass-baritone Nicholas Isherwood  in a concert of electronic and vocal music given at the Moryork Gallery in Highland Park. This was the Los Angeles appearance for Isherwood’s world tour that will also take him to New Zealand, Portugal and France. The evening included works by Michael Norris, Jean-Claude Risset, Lissa Meridan, Isaac Schankler and featured an adaptation of Karlheintz Stockhausen’s powerful Capricorn.

The Moryork gallery space was roomy and comfortable for the 40 or so in attendance and even though the interior walls were lined with all sorts of exotic items the acoustics were carefully engineered with several good speakers placed around the perimeter of the audience. A table with a soundboard and several computers completed the electronic setup. With Los Angeles sweltering in triple-digit temperatures the heat inside the gallery was an issue, but it did not affect the performance.

The first piece was Deep Field I by Michael Norris, a composer and software programmer who teaches at the New Zealand School of Music. Deep Field I is the first of a proposed series of works based on the Hubble Telescope Deep Field images. The electronics provided a suitably spare and expansively distant feel while Isherwood’s rich voice added a welcome warmth. The texts were taken from MUL.APIN, an ancient Babylonian star catalog, On the Revolution of the Heavenly Spheres by Copernicus and some 16th century French poetry by Pierre de Croix. The blending of voice and electronics through the speaker system was effective, although the vocals would occasionally overpower. This piece provokes feelings that are an interesting combination of the primal and the futuristic, inviting the listener to speculate about immensity of deep space and our place in it. Deep Field I was commissioned by Nicholas Isherwood and is well matched to his voice.

Otro followed, a piece by French composer Jean-Claude Risset. Otro is based on The book of sand by Jorge Luis Borges that describes an imagined encounter by the writer with his younger self. Isherwood “sings live in dialogue with acousmatic sounds that include recordings of his own voice as well as episodes of synthetic or processed digital sounds…” The voice would appear at different times and in different places in the speaker array and this produced a host of complex and interesting effects. Some times the vocals were solo, sometimes accompanied by natural sounds – such as water flowing or a crackling fire – and sometimes accompanied by electronic sounds. The coordination of this variety of sounds with the voice was impressive and the result at several points touched on the majestic. Isherwood finished the piece in dramatic fashion on a wonderfully sustained low note. Jean-Claude Risset has a long history in electronic music: he worked at Bell Labs in the 1960s and later at the MIT Media Labs. Risset also was awarded the Giga-Hertz Grand Prize in 2009.

The next piece was shafts of shadow  by Lissa Meridan, another New Zealander presently living and composing in France. According to the program notes: “shafts of shadow explores the idea of multiple shadowing via a process known as echolalia, a vocal disorder where the afflicted person spontaneously imitates both vocal and non-vocal sounds immediately as they are heard, in a continuous stream of vocalizations.” This was realized by having the ‘score’ fed as live audio into the headphones of the performer who then vocalized into the microphone. A ‘shadow’ version is thus produced, having passed through the mind of the performer and out to the audience. The processed vocals acquired a distinctive metallic ring as they passed through the speaker system. This piece had a ‘stream of consciousness’ feel to it from the combination of vocal and processed sounds that poured out from the speakers.

The first part of the concert concluded with the premiere of Isaac Schankler’s Mouthfeel, a work about… tacos. This is a subject taken seriously in Los Angeles but the intent of this piece was to explore the intersection of broadside marketing and mass-production, where too much information may not be… helpful. This was effectively realized with a sung narrative, the text drawing heavily from the commonplace superlatives of selling – “Too much flavor! It’s not a product, it’s a platform.”  This was then electronically processed and mixed with the sounds of manufacturing and consumption. The result was an amusing combination of marketing platitudes nicely re-purposed into a commentary on the industrial-scale process of making and eating tacos. Isaac Schankler is a co-director of People in Electronics, teaches electronic music as USC and music theory at Chapman University and is a frequent contributor to New Music Box. 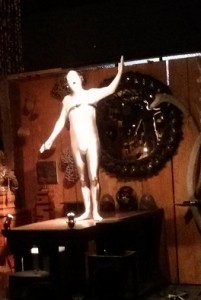 After an intermission Capricorn, by Karlheinz Stockhausen was performed. This was perhaps the most conventionally structured piece of the evening, almost operatic in form. In this adaptation an alien being from the dogstar appears and sings the music of sphere Sirius to the audience. Nicholas Isherwood made his entrance accompanied by loud electronic sounds simulating the roar of an arriving spaceship. He was dressed head to toe in a silver body suit and silver makeup – a heroic feat in itself considering the heat – and climbed up to a raised platform, facing the audience. The program notes state that “The work is based on simple melodies from Stockhausen’s piece ZODIAC, which are sometimes slowed down so much that the melody is no longer recognizable.”

The electronics in this piece provided a mysterious, but never menacing, ambiance suited to the alien presence. The singing was strong but controlled, and Isherwood stood rooted to the same place on his platform, changing his pose as the music required. And it was all very convincing – you could actually believe that you were hearing an alien bringing his message through song. As the piece progressed, empathy for the alien increased as the warmth of his message took hold, winning over the audience. A beautiful ending vocal preceded the rush of sound as his spaceship departed, closing the work. This performance by Nicholas Isherwood was greeted with enthusiastic applause for what was clearly a powerful reading of a landmark work.

Nicholas Isherwood worked with Karlheinz Stockhausen from 1983 to 2007 in addition to an international career in opera and commercial recordings. He has taught at the Paris Conseratorie and the Salzburg Mozarteum and has also held a number of visiting professorships in both Europe and North America.

The next concert from People in Electronics will be October 8th, 2013 at the Monk Space  in Los Angeles and will feature the Lyris Quartet.

(This post revised 9/10/13 to reflect the actual concert order and some comments that were inadvertently reversed for the two middle pieces in the first half.)