The Society for Minimalist Music is holding their biennial conference this year on the campus of Cal State Long Beach from October 3d through the 6th. Opening day included a concert of piano music by primarily west coast-influenced composers who have appeared on the Cold Blue Music label, and two of whom – Michael Jon Fink and Kyle Gann – were in attendance. The venue was the Daniel Recital Hall which comfortably held the audience, consisting mostly of conference attendees. The pianist was Bryan Pezzone.

The wide variety of expression in this concert – even within the context of piano music – illustrates the extent to which minimalist music has evolved past its stereotypical image of repetition and stasis. Nine pieces by six composers were listed on the program; here are some impressions and reactions.

The concert opened with Five Pieces for Piano Solo (1997) by Michael Jon Fink, whose spare, soft style is very engaging. Part 1, Passing, starts off with single tones and then a series of interesting chords that build into a slight tension. This continues in part 2, Mode, now with some dissonance, producing a somewhat more strident sound. Fragment, for Lou Harrison, the third part, provides a welcome contrast with a series of soothing low arpeggios that are then repeated in a higher register. The tension reappears in part 4, Echo with the same repeating figure and is resolved in the last part, Epitaph‘ with a slow, calming bell-like finish – the final chord seems to hang in the air, evaporating into silence. The long pauses between parts and the simple elegance of the sequences add to the introspective nature of this quiet music.

Hermetic Bird, a section from Peter Garland’s Bright Angel (1996) followed with a driving, bright sound incorporating powerful chords and echoes. It is as if a light has been switched on or you are facing the sun just above the horizon. This piece was written in memory of Kuniharu Akiyama and according to the program notes, Garland states that “Bright Angel refers to a view point on the north rim of the Grand Canyon, where one gets a spectacular view of canyons and depths. I was there at sunset, thinking of Kuniharu and of this piece, thinking about life and death.” As the work progresses it becomes softer with overtones floating above thick chords and sounding almost church-like. The piece concludes with louder section supported by a prominent bass line and is as satisfying in its strength as the ending of Five Pieces for Piano Solo was in its softness.

A second Garland piece was heard, The View from Vulture Peak (1987) and this was followed by Ponkapoag Bog (2008-09) by Daniel Lentz.  This has a warm, soft feel – as reflective and nostalgic as Garland’s music is dynamic.  Ponkapoag Bog is filled with lovely chords that become bouncy and playful as the piece progresses – a full sound that is bubbly and almost dance-like at times. Daniel Lentz is based in Santa Barbara, California but interestingly this piece was commissioned by Dr. Richard Marcus of Dorchester, Massachusetts, and Ponkapoag Bog is an actual historic New England Native American site nearby. Ponkapoag Bog is a sunny piece, full of optimism, and in its denser sections reminded me a bit of a Prokofiev piano concerto.

Sad from Kyle Gann’s Private Dances (2000) suite was next.  According to the program notes, Kyle “…had to excise some of the original 11-against-13 rhythms, but the piece is still tricky. The idea was to have a clear harmonic rhythm while thoroughly obscuring the meter…” Byran Pezzone carried this off nicely and to my ears the ornamented moving line in the melody and the solemn – but never somber – feel of this piece sounded almost conventional. Private Dances was commissioned by Sarah Cahill and was premiered by her on a New Albion CD. 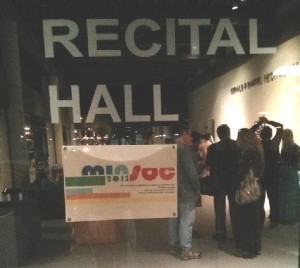 as she sleeps (2000) by Michael Byron followed, a piece consisting of soft chords, pauses and a spare, economical style as befits a work dedicated to the composer’s daughter. The other pieces listed on the program were La Ciudad de Nuestra Senora la Reina de Los Angeles (1980) by David Mahler, and Requium (1976), another Daniel Lentz piece. The program concluded with Celesta Solo (1981) by Michael Jon Fink.

Bryan Pezzone, known for his film and studio work, did a masterful job on the keyboards, readily adapting to the different styles and requirements of each piece. Afterwords, Cold Blue Music hosted a reception in the lobby, and Jim Fox could be seen moving among the guests with his usual gregariousness. It was a fine evening for hearing minimalist music and for reconnecting with acquaintances.