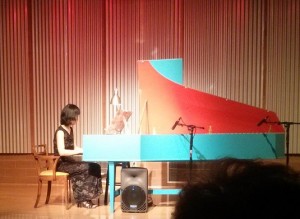 Friday, February 7, 2014 Piano Spheres presented The Intrepid Harpsichord, Part II, performed by Gloria Cheng at Boston Court in Pasadena. The concert included an intriguing mixture of early French and Italian Baroque works along with late 20th century pieces. The Marjorie Branson performance space at Boston Court held an enthusiastic crowd and was the perfect venue for an intimate evening of harpsichord music.

Along with Ms. Cheng, the other star of the show was the double-manual harpsichord constructed by Gloria’s husband Lefteris Padavos. The instrument took shape in their garage during 2012 and is based on a model created by the 18th century French master harpsichord builder Pascal Taskin (1723 – 1793). The tuning was, according to Ms. Cheng something of a compromise given the diversity of the program – the early Baroque and our modern equal temperament being distinctly different. The Vallotti tuning was adopted for this performance and the result was a warm, full sound that did not detract from any of the pieces played. The light amplification and good acoustics of the space also contributed, so that even the more subtle textures and passages with elaborate ornamentation were clearly heard. 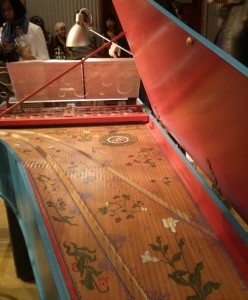 The concert opened with Prélude non-mésuré (c. 1650) by Louis Couperin. This was a quiet, flowing piece with a wistful, nostalgic feeling. The tuning and acoustics complimented the music perfectly. Other early pieces by Frescobaldi and Rossi followed, and these had a more familiar harpsichord sound, with cascades of successively more complex phrases pouring out from the keyboard.  Ms. Cheng explained that the notation of this period is very general, leaving much to the performer in the moment. The playing here was precise and unhurried, even when the passages were in a fast tempo and highly ornamented.

Trio Sonata (1994) by John Harbison followed, consisting of four short movements, all titled Fast. Beginning with a blizzard of notes and variously quiet, syncopated, halting or playful, this piece provided an interesting comparison to the music of the first part of the concert in that, when played on the harpsichord, it did not seem so far removed from the 17th century. Carolyn Yarnell’s Prelude and Fugue (1984) followed and this seemed brighter and more optimistic when compared to the formal Baroque pieces while equaling them in elaborate phrasing. There was, to my ear, at least, a sense of continuity between the centuries that was underscored by hearing these pieces played successively on the harpsichord.

More Baroque music followed, including La Marche des Scythes (1746) by Joseph-Nicolas-Pancrace Royer. This piece was very formal – almost pompous – and extremely dense at times. It was written as a musical description of barbarian cavalry and the tempo was often fast and furious as befits the subject matter. The playing was often difficult and taxing – the effort being appreciatively received by the audience at the finish. Les Baricades mysterieuses (1717) by Francois Couperin followed, and provided an excellent contrast to La Marche. Soft and lush, with expressive harmony, Les Baricades mysterieuses has a simple and endearing quality that approaches an almost romantic sensibility.

Three late 20th century works closed the concert. The first of these was Continuum (1968) by György Ligeti. This piece is built on repeated arpeggio phrases, with single notes often floating above, a form that prefigures the later minimalism of Riley, Reich and Glass. The effect as heard on the harpsichord is now lovely, now distressing, and now rising in tension. The playing soon becomes fast and intense and the harpsichord keys in the higher registers could be heard clicking under the strain. The tension and pitches ratchet higher and higher – the notes now pouring out – until the sudden ending, greeted by cheers and applause from the audience. This was followed by the more introspective Rain Dreaming (1986) by Toru Takemitsu, a composer whose work is informed by a love of nature and space. Rain Dreaming is quiet, spare, and filled with beautiful harmonies. It is at times solemn, lonely and seems to alternate between shadow and light. A feeling of uncertainty arises in this music that never quite leaves the piece, but it ends on a lovely warm chord at the finish.

The final work on the program was Phrygian Tucket (1994), a piece by Stephen Montague for amplified harpsichord and tape. A tucket is an Elizabethan musical phrase that means a flourish of trumpets and drums. The addition of the tape provided a series of deep chords in the lower registers that act to form a solid foundation for the melody in the harpsichord. The result is a strong, muscular sound as would be expected from a tucket. The bass tones coming from the tape seems to fill in between the more strident tones of the harpsichord and this adds a luminosity to the upper notes that is quite effective. As the piece progressed, certain of the passages in Phrygian Tucket acquired a more introspective feel. Soon , however, an increasing tempo and discord introduce a sense of building tension that is released in a dramatic full-keyboard arpeggio that ends the piece in sudden silence. The addition of the sounds from the tape definitely enhances the harpsichord and makes Phrygian Tucket an interesting blend of old and electronic. 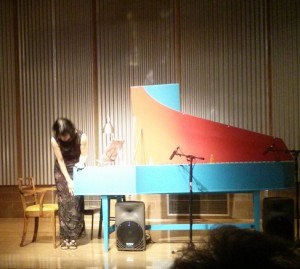 The Intrepid Harpsichord, Part II was carefully programmed and impressively performed, combining old and new music as heard through the lens of the harpsichord. The audience responded with an extended ovation in appreciation. An encore followed by Ms. Cheng, a repeat of Les Baricades mysterieuses, the Francois Cuperin piece that nicely summed up the mixture of old and new that was the theme of the program.

Piano Spheres will next present a concert by Mark Robson at Zipper Concert Hall in Los Angeles on February 11.