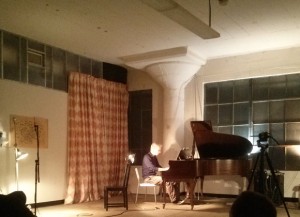 On Saturday, March 22, 2014 Dutch pianist Reinier van Houdt appeared at the Wulf in downtown Los Angeles for a night of experimental music that was intended, according to the concert notes, “… to question the act of composing.” A capacity crowd of the knowledgeable gathered to hear a series of eight piano works by European and local contemporary composers that lasted over 2 hours. This was the second local appearance in as many days for van Houdt – who had performed just the night before at the RedCat venue in Disney Hall.

The concert opened with Radio + Piano (2013) by Los Angeles composer Casey Anderson. For this piece the piano was fitted with an electronic pickup that allowed Reinier to use the keyboard and pedals to interact with the sounds that were generated continuously by a laptop. A stream of static from the computer formed the background, very much like that once heard coming out of older radios. Against this came a series of low humming sounds that increased, and then decreased in volume, with the period between these entrances varying from a seconds to maybe half a minute. This produced a searching feel, like trying to tune in an elusive radio station late at night. As the humming intensified it became almost like the pedal tones of a great pipe organ and you could feel the force of the sound in your chest. Radio + Piano was effective at blurring the line between technology and the piano. The pianist had input into the process – but not in the expected way – and by this contrast succeeded in asking a question about what constitutes an act of composing.

Nichts, das ist (2006) by Mark So was next and this began with a solemn, soft chord followed by a long pause. This pattern of quiet, solitary chords and extended periods of silence continued, like a series of contemplative thoughts barely stirring through the mind. Reinier van Houdt’s intense concentration and gentle touch here were especially noteworthy and everyone in the room remained completely engaged, as if hearing a murmured prayer. Creating the pianissimo chords was something of a worry to van Houdt – he explained later that each piano has a unique touch, especially in the very soft dynamics, and an unfamiliar instrument was a challenge. But Nichts, das ist invites the audience to listen closely and the playing in this performance was masterful.

A series of similarly quiet pieces followed. These spanned a spectrum from simple and still to active and agitated. Meditation for Solo Piano (2002) by Michael Winter, however, has a somewhat more ringing sound – like bell chimes – that offered a more dramatic feel, but a definite sense of the subtle seemed to be common thread to this concert. The audience was completely engaged throughout, van Houdt applied a studied concentration to all and displayed an attention to the dynamic details that was impressive.

After an extended intermission, Natura Morta by Walter Marchetti closed the concert. For this piece a large tray of very ripe fruit was placed on top of the piano.  This gave a faint, but unmistakable flavor to the air that increased as the piece went along and provided an additional sensory dimension to the music. Natura Morta is deliberate music consisting of a simple, steady melody line of single quarter notes. The dynamic never varies from mezzo piano. This line is repeated with the same notes but not in exactly the same sequence, and this gives the piece an organic, plant-like feel. It is as if you are looking at a vine – similar form and material, but never identical in every segment. 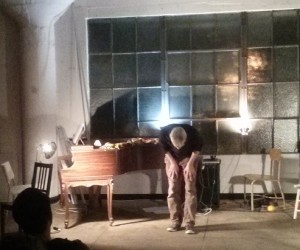 The linear melodies seem to meander and hang in the air, like the fragrance of the ripened fruit One of the scores available for this piece specify three kinds of fermata, the duration of each one being determined by the length of the preceding phrase – the longer the phrase the more time given for the harmonics to die out. In this way the decay of the fruit still life is reinforced by the music as well as the scent in the air. Natura Morta runs on for an hour and the feeling of the phrases is ambivalent: not quite melancholy, not quite aimless – but there is a sense of a natural organic process at work. A very high level of concentration is required to play this and Mr. van Houdt never wavered despite the length of the piece and the late hour. It was an impressive ending to a demanding program.

The pieces played in concert order were: