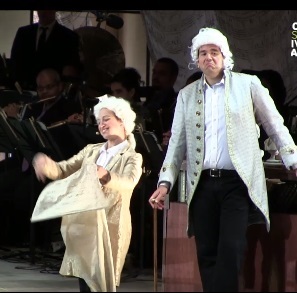 The 2014 Ojai Music Festival opened on Thursday June 12 to begin 4 days packed with informative talks, movie screenings, parties and concerts. The Festival’s Music Director this year is Jeremy Denk and the resident musical groups included The Knights orchestral collective and the Brooklyn Rider string quartet. Friday night’s concert was built around an examination of the Classical period and featured a Haydn string quartet as well as the world premiere of a new opera – “The Classical Style” – by Jeremy Denk and Steven Stucky that was commissioned by the festival for the occasion.

The concert began with Haydn’s String Quartet in G minor, Op. 74, No.3 (1793), performed by Brooklyn Rider. Right from the opening passages of the 1st movement the light, bouncy rhythms combine with the classical harmonies and familiar Haydn wit to produce a lively and optimistic feel. As the instruments took turns developing the theme there was a sense of increasing fussiness that added to the fun. The playing was light and precise, setting just the right mood for the evening.

The second movement was more stately and slower – almost hymn-like – but easy and flowing. This turned a bit darker towards the middle, but soon returned to the lighter feel of the opening, giving a sense of resolution. The ensemble playing was impressive here and the ornamentation in the upper parts nicely done. 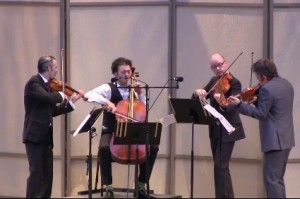 The third movement, in the traditional triple meter, was faster and featured close harmony. The balance and dynamic control were outstanding and the bright feel reinforced the sense that this was music that does not take itself too seriously. The final movement was faster still and had a dramatic feel that turned brighter with a series of bouncing rhythms that suggested a sort of gallop, hence the nickname of this Haydn string quartet as the “Rider”. This work is typical Haydn – bright, optimistic and not too serious. The precise and agile playing by Brooklyn Rider caught the essence of this piece exactly and it was an ideal prelude to the opera that followed.

Not being able to make it to Ojai, I listened to the concert as it was streamed on the Internet. The quality, both audio and visual, was excellent and there were no drop-outs or interruptions of consequence. The seeing and hearing are much like being in one of the back rows of the Libbey Bowl and was actually an improvement over my usual seating out on the lawn.

The streaming provided another benefit – a televised interview of Steven Stucky during intermission by Fred Child of American Public Media. The subject of the interview was the music for The Classical Style: An Opera (of Sorts). This is a comedy based loosely on The Classical Style by the late Charles Rosen, a textbook first published in the early 1970s and widely influential in the field of musicology. The libretto, by Jeremy Denk, was taken in part from the Rosen book but the opera also includes the personalities of Mozart, Beethoven, Haydn, Robert Schuman, Charles Rosen, and characters like the Tonic Chord, Dominant Chord, Sub Dominant Chord and the Tristan Chord as well as a host of supporting characters. The plot revolves around Haydn, Mozart and Beethoven returning to earth to reclaim their musical relevance and to rescue the classical style from academic over-analysis by appealing to musicologist Rosen. There are also scenes involving the several musical chords in a bar, and other assorted comic vignettes and sketches derived from musical theory and history.

Apart from the varied collection of characters, one of the challenges Mr. Stucky pointed out was the need to write music in the classical style, using the sonata form where appropriate, or in the romantic style during the Tristan Chord scenes. Another challenge was that much of the comedy was based on knowing something about music theory, and this needed to be put across in a way that all audiences could enjoy. The character of Charles Rosen, a close personal friend of Jeremy Denk, was portrayed as something of a hero, bringing order to the comedic chaos around him, and this necessitated a more serious musical sensibility when he was on stage.  Steven Stucky, while confident and articulate, nevertheless betrayed the look of a man who had spent the last two years of his life on a large-scale work to be premiered on Friday the 13th. He needn’t have worried.

For The Classical Style: An Opera (of Sorts) the orchestra was situated on the stage and was comprised of the Knights with the addition of the Brooklyn Rider string quartet. The singers and scenery were mostly in the foreground but there was some creative staging required to work within the friendly confines of the Libbey Bowl. The singers wore microphones and the normally reliable sound system worked as expected so that the music and the libretto were clearly heard. Unfortunately there was no listing I could find for the cast of singers who were all excellent.  Mary Birnbaum directed and Robert Spano was the conductor.

The opening scene is in heaven where we find Mozart, Haydn and Beethoven in various stages of boredom and dissatisfaction. Mozart (sung by a soprano but with just the right amount of breeziness) busies himself with writing a letter to the Hollywood producers of Amedeus, inquiring about possible royalty payments and future scoring possibilities – this sent a loud giggle through the audience. Beethoven is mostly lost in thought but delights in running up huge scores in their scrabble games with enormous German words. The music is elegantly classical but turns profound when Beethoven (a bass) is singing. Haydn (a baritone) seems frustrated, and lacking any work to do, worries about his musical legacy. All are alarmed when Haydn reads from a New York Times article stating that ‘classical music is dead,’ and the music here suddenly turns from smoothly classical to faintly dissonant, as if a foreshadowing of the future. They sing together in harmony – “It is shocking how time has made us into caricatures of ourselves.” But then they pick up a nearby book – it is The Classical Style by Charles Rosen – and the music swells to an heroic theme as Haydn exclaims “It’s all about how great we are!” The three composers depart, seeking out Rosen on earth to persuade him to restore their legacy and relevance. 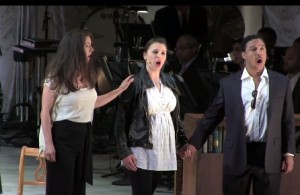 The scene changes to the Rosen home. Charles Rosen is engrossed in cooking but is actually supposed to be going to an academic symposium. Here Rosen sings of the elegance of the sonata form and the music swells to a pleasing grandiosity. Meanwhile in a nearby bar the Dominant Chord is having a drink and an existential crisis; she doesn’t feel ‘resolved’. The Tonic Chord swaggers in and begins singing about ‘Me, Me, Me,’ and this provoked a knowing laugh from students of tonality. Dominant is attracted to Tonic who replies that he “isn’t sure he wants to be in a relationship.” A sultry Sub Dominant Chord walks in and Tonic is immediately attracted to her, but she seems cool and aloof. This scene with the three chords is entertaining as well as educational – and way to dramatize their harmonic functions. At length Rosen appears, and explains the circle of fifths.

More such scenes follow. The composers appear in the bar and Mozart is attracted to Sub Dominant. Rosen explains Mozart’s music and a scene from Don Giovani breaks out played by Sub Dominant and Tonic. Henry Snigglesworth, a musicology student from UC Berkeley appears with questions and an endless supply of statistics about Beethoven’s music. There are several inside jokes about music and Beethoven announces that he wants to go to the Sonata Symposium to meet Rosen.

The Sonata Symposium scene opens with heavily dramatic Beethovenesque music, but there is no sign of Charles Rosen. The attendees all sing an explanation of the sonata form, in sonata form. This is convincingly classical music and Mozart, Beethoven and Haydn enter to endure a pedantic academic explanation of the sonata form ending with a big finish by all the singers. Just as this is concluding a blast of Wagnerian music is heard and the Tristan Chord, the ‘saddest of all chords’ enters dressed in a wanderer’s coat and hat, complete with a Wotan eye patch. The Tristan Chord embarks on an extended solo – in wonderfully expressive Wagnerian style – about the dark future in store for the chords that is coming in the romantic era. As Tristan departs, Dominant, Sub Dominant and Tonic chords, alarmed by what they have heard, reconcile in a short aria.

Back at home Charles Rosen is finishing a late dinner. Beethoven, Mozart and Haydn enter, entreating his help after the discouraging events of the symposium. But Rosen refuses and states that their music is what must make their legacy and keep them relevant. In the final scene Robert Schuman appears to a lonely Rosen and explains how styles must always change. In a final statement Schuman sums up by declaring that the sonata form was “ …a miracle, Charles, that can never be repeated.” 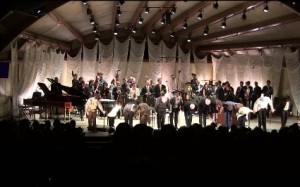 The Classical Style: An Opera (of Sorts) has a lot of singers and a lot of moving parts to the plot. The music, even with the many styles and requirements, was well matched to what must have been a tricky libretto. The singers, musicians and of course Steven Stucky did a fine job to bring it all together. If the goal was to produce a piece that will see wider performance, Denk and Stucky may have already succeeded but perhaps a little streamlining would make for a less sprawling and more cohesive production. But, all in all, it was an enjoyable experience and well suited to the festival atmosphere..

Although this piece was intended primarily as a comedy – and succeeded as such – it is remarkable how seeing Beethoven, Mozart and Haydn, even as broadly drawn characters acted on stage, can provoke such an empathetic response. We know these composers from their music but to see them concerned about the relevance of their work in the 21st century was surprisingly touching. The Classical Style: An Opera (of Sorts) manages to make light of the current uncertain state of classical music, but also reminds us – through the words of Charles Rosen – of its ultimate value.

This performance is archived on UStream video here: