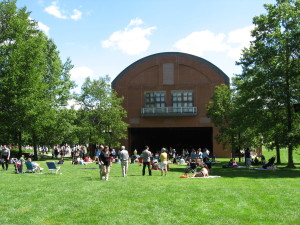 On Monday, July 21st at 8 PM, the last concert of Tanglewood’s 2014 Festival of Contemporary Music is a well-stocked program of orchestral works. The centerpiece is Roger Sessions’s Concerto for Orchestra, a work commissioned by the BSO thirty years ago. Steven Mackey’s violin concerto Beautiful Passing will feature as soloist Sarah Silver, one of Tanglewood’s New Fromm Players. Music by John Adams has not in recent memory frequently been featured on FCM programs, but this year his Slonimsky’s Earbox makes an appearance. The sole work by a younger composer, The Sound of Stillness by Charlotte Bray, piqued my interest – it is an impressive piece. (Check out a video about it here.) Thus, this year’s FCM ends the way that many of its seasons are curated: with nods to tradition as well as explorations of new, unfamiliar, and underrepresented corners of contemporary repertoire.