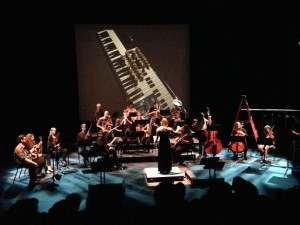 April 1, 2015 was the date and the REDCAT Theater at Disney Hall was the site of a concert by the Southland Ensemble of the early music of the late Robert Ashley. A full crowd was in attendance with only a scattering of empty seats.

The Entrance (1965) was first on the program and this was video projected behind the stage showing a keyboard with stacks of pennies being placed on the keys. There were speakers in the back of the theater where the tones could be heard and as a new stack of pennies was to a key added the resulting tone could be heard entering what was a continuous chord. The stacks grew in number and eventually the sound produced was a large cluster chord that seemed to cast a spell in the theater – just loud enough to be heard but never very definite and always changing as stacks of coins were moved about or added to the keyboard. In fact this video was projected during the entire concert, providing a sonic foundation for all that followed. Robert Ashley, quoted in the program notes, stated: “I have never understood what ‘The Entrance’ means. It was ‘inspired’. I would guess that it means something like the way to get into another, different frame of mind – that makes the performance of the other pieces possible.” This continuous realization of The Entrance was well-suited to the REDCAT performance space and consistent with Ashley’s vision of it.

She Was a Visitor (1967) featured a female soloist spotlighted in one corner of the dark stage precisely repeating the words “She was a visitor.” As this continues, the listener becomes aware of musical suggestions heard in the patterns of speech. The audience was invited to join in by choosing a sound from the recitation and then vocalize that sound quietly for the length of one breath. There was some participation in this and it was most effective when sustained. Small pockets of sound arose among the audience in the darkened theater at varying times and this was an appealing addition to the repetition of the phrase. It was as if small communities of sound formed, disbanded and reformed in subtle collaboration with the soloist. That She Was a Visitor extracted these fascinating bits of musicality from simple repeated speech was a credit to the focus of the soloist and the theatricality of the staging. Such was the power of the moment that applause was held – it was as if we were witnessing the arc of a larger story as the stage was prepared for next piece.

The Wolfman (1964) followed and this piece was described in the program notes as “… treating the cavity of the performer’s mouth as a chamber that influences the nature of the feedback heard by the audience.” Accordingly, a very brave James Klopfeisch took up his position center stage under a spotlight and a microphone. Off to the right, Casey Anderson operated some equipment that played back recorded voices and generated various electronic sounds. The soloist began by humming a steady note into the microphone and attempting, with varying success, to induce feedback into the theater sound system. Different vocal techniques were used including sung notes and long, sustained shouts. As the piece progressed, the beeps and chirps of the accompanying electronic sounds became louder and seemed to compete with the soloist. The cries of the soloist into the microphone became more plaintive as the electronics gained in strength – perhaps as a metaphor for the individual trying to be heard in a society filled with informational clutter. At one point Klopfleisch began imbibing water in an attempt to change the sonic properties of his throat and mouth in order to match the power of the ever-rising electronics. The increasing distress of the singer generated an instinctive empathy for the individual striving to be heard. Eventually the electronic chatter slowed and then stopped, leaving just the soloist to bring the piece to a quiet ending. The stage lights darkened leaving just the enigmatic sound of the cluster chord from the video. The Wolfman is a memorable piece that gains its power from the courage of the soloist and the precision of the lighting, staging and sound systems – all of which was featured in this excellent performance. 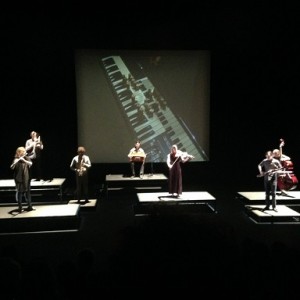 In Memoriam… ESTEBAN GOMEZ (1963) was next and for this the stage was populated with a number of instruments and players, starting with a small, portable organ that began the piece with a single, sustained tone. The other players entered one at a time contributing long consonant pitches, rising and falling in volume. This produced a lovely sound whose color changed as slight variations in pitch were introduced by the players – at times this gave an otherworldly feel before returning to the familiar. The stage lighting was again very effective, spotlighting the players against the darkened stage. As the piece progressed a single instrument would dominate the texture for a time, then fade back while another emerged. Zero beating could be heard as the instruments matched pitches and, overall, the ensemble was very controlled, managing the long, continuous tones of this piece with great care.

After the intermission, another memorial piece was played, this time In Memoriam … CRAZY HORSE (1963). A much larger ensemble filled the stage – in orchestral fashion – with high and low string sections, brass and winds. The players tuned and then a conductor walked out to take her place at the podium. The strings began with a series of rapid, random notes that had a frantic, almost chaotic feeling. This was soon offset by warm, chorale-like tones from the brass, all playing smoothly together. The piece proceeded in this way – one section issuing a frenzy of uncoordinated notes while another section countered with sustained and soothing tones. There was no common beat or rhythm, and the sections entered and faded out on their own. The tension and contrasts produced some unusual textures and feelings – often quite lovely – although overall a sense of melancholy seemed to predominate. In Memoriam … CRAZY HORSE brings a scale and presence equal to its subject that all came across quite clearly in this performance. 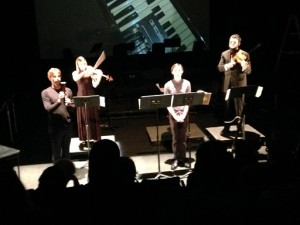 Trios (White on White) (1963) concluded the concert and this was a series of appearances in different parts of the stage by three players. The first of these was a flute, alto sax and accordion playing a sustained and dissonant chord. After a short time the spotlight moved to a different part of the stage where a flute, viola and percussion were stationed. The percussion consisted of a series of suspended crow bars that were struck in sequence. At a certain point in the sequence the flute and viola entered for the duration of just one strike, and this trio brought a sort of Buddhist sensibility with the solemn clanging of the crowbars.

The final trio featured a violin and viola player in white masks accompanying a bassoonist who proceeded to give a whimsical lecture on the history of his instrument. This dissertation of the trivial and the arcane drew some knowing laughter from the audience, and it was all intended in good fun. The masked string players added a running commentary as the bassoon player explained, and then demonstrated, a number of historical styles and mannerisms of the bassoon including humorous excerpts from Mozart, Vivaldi, Stravinsky and Berio.

This concluded the concert on a lighter note but there was no question that the Southland Ensemble had brought the early works of Robert Ashley to the REDCAT stage in masterful fashion. So much of Ashley’s works are theatrical in nature and the superlative staging and lighting were exactly what this concert required. The Southland Ensemble continues to add an important dimension to the cultural life of Los Angeles with outstanding performances of the late 20th century masters

The next performance by the Southland Ensemble will be in June, 2015 – check their website for details.