The Wild Beasts in Pasadena 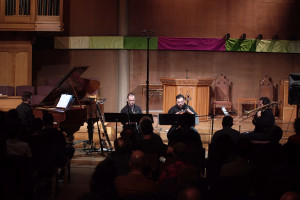 The spaciously comfortable sanctuary of the Neighborhood Unitarian Universalist Church in Pasadena, CA was the site for a concert titled gnarwhallaby: The Wild Beasts. On a pleasant Sunday evening, March 29, 2015, a nice crowd gathered to hear the six pieces on the program that included a world premiere. The concert was produced by People Inside Electronics and featured the formidable playing of the gnarwhallaby ensemble combined with historical as well as contemporary electronic sounds.

A question and answer session preceded the concert and a brief history of gnarwhallaby was recounted. It was noted that the instrumental combination of the group comprises a sort of miniature orchestra with piano, woodwind, brass and strings represented. This combination tends to drive their repertoire and much of their material has come from the late 20th century music of Eastern Europe, although they have performed a number of works by contemporary Los Angeles composers.

The first piece was Pour quatre [For Four] (1968) by Włodzimierz Kotoński (1925-2014) and this began with a series of light, rapid runs of notes from several instruments, played independently and with no common beat. Sforzando entrances by individual players appeared against this busy background and the overall effect was quite intriguing. As the piece continued, different duos of instruments would begin a section, be joined by a third instrument and then drift apart as the combinations reset. This gave rise to a procession of different textures of varying densities that was quite engaging. Although no electronics were used in this piece, the program notes state that Kotoński composed by “Eschewing strict meters, tempi and traditional score format in favor of a cue-based and texturally/temporally improvisational notational technique, the aesthetic of this piece is less like chamber music and more like the unpredictable and ineffable environment of the early electronic pieces.” All of the strong entrances were cleanly played and the wilder parts efficiently managed by gnarwhallaby, making Pour quatre the perfect reference point for the rest of the concert program.

Next was Music for Magnetic Tape and Piano Solo (1971-72) by Andrzej Dobrowolski (1921 – 1990) and for this two large speakers were placed on each side of the piano that began the piece by emitting a loud rumble of thunder. A sustained and anxious sound followed and a crash from the piano dramatically signaled the entrance of the soloist. A variety of mechanical sounds, clicks and squeaks from the speakers were accompanied by a series of rapid runs on the keyboard and the alien feel of the electronics was offset by the more musical counterpoint in the piano. Different sounds came from different speakers – at times and the piano had to compete to be heard. The electronic sounds eventually settled into a menacingly low rumble, like some sinister alien presence lurking nearby in the shadows. The piano played lightly – but still sharply – as if reflecting the anxiety that was hanging in the air. In this charged atmosphere the piano evoked a mixture of dread and fear as if waiting for the creature to strike. The electronics now became more animated, like a pin ball machine, going faster and faster.  The piano responded with a series of frantic passages as if in a full panic, followed by a sudden crash and silence. Now alone, the piano issued quiet, but anxious notes as the electronics started up again with a dull roar that grew in volume, before finally fading completely away. Music for Magnetic Tape and Piano Solo is a powerful and frightening piece of music that demonstrates how effectively electronic sounds can trigger primal emotions.

The Wild Beasts (1978) by Morton Subotnick (b. 1933) followed, for piano, trombone and electronic ghost score. This work was originally inspired by an exhibition of Les Fauves paintings, and Subotnick writes: “I was left with the impression that each subject was portrayed as ‘normal’, but that we were seeing this subject through a strangely prismatic atmosphere… an atmosphere comprised of rare and possibly ‘unearthly’ gases… an atmosphere in which normal expectations of color and shape would not exist. This was the visual counterpart to my ‘ghost’ idea, i.e. a traditional musical instrument played into an unusual and continually transforming atmosphere … an atmosphere in which the normal sound expectations would not exist.”

The instruments of gnarwhallaby were played into microphones and the sound processed and played out again through speakers to create the ‘transforming atmosphere’ that is basis of this work – Morton Subotnick sent his original electronics files to be used for this performance.  The piece begins with muted trombone calls, like hearing some animal in the far distance. The piano strikes single notes and the feeling is solemn, yet very exotic – as if we are in some pleasant pasture high in the remote mountains. The trombone calls become louder and longer while at the same time the piano becomes more strident – as if something is approaching. Finally a loud trombone blast announces the arrival of a large menacing presence and the piano boils in excitement. Rapid and anxious playing in the trombone combine with frantic piano passages to evoke something like a melee, A series of vocalise shouts and grunts are heard coming through the trombone and the speakers, adding to the sense of terrible combat.

The playing continues in this fashion with the electronics bending and twisting the sounds, but always increasing in dynamism. The energy escalates until the trombone finally starts to slow and drop in pitch before dying away. Funerary chords are heard in the piano while the sound of air rushing through the trombone gives a sense of shallow breathing by the beasts. A cup mute produces a series of low, growling sounds in the trombone as the piano tolls single, solemn chords at increasing intervals as the piece fades quietly away.

Running some 30 minutes in length, and with the trombone almost continuously called upon to produce powerful and unorthodox sounds, this was a heroic effort by Matt Barbier whose lip and lungs never faltered. The audience cheered at the conclusion and gave a standing ovation for this inspired and intense performance.

Krabogapa (1969) by Andrzej Dobrowolski followed the intermission, scored for clarinet, trombone, cello and piano. This began with a series of sharp notes in the clarinet that were joined by the cello and accompanied by rapid runs in the piano. Low tones in the muted trombone followed, with a repeating phrase in the piano and a series of beeps and boops from the clarinet that made for a frantic feel. After a short quiet section the clarinet exploded in a series of very bright and piercing passages. The entire ensemble issued runs of short, rapid notes with no common rhythm, but nevertheless starting and stopping precisely together. Soft trombone notes dominated a final quiet section with the cello building tension until sounding a final pizzicato ending note. Krabogapa brings out the orchestral elements in the gnarwhallaby ensemble – noted in the pre-concert talk – and the strings, brass, wind and keyboard playing was equal to the challenge of this very expressive work.

To Warsaw with Love [Z Milosci Do Warsawy] (1971) by Donald Erb was next, scored for clarinet, trombone cello, piano and electronic sounds. In this piece the electronics seemed more at ease with the acoustic instruments, becoming a sort of conversational partner rather than a hair-raising adversary. The opening was built around a series of pitches moving alternately upward and down with the acoustic instruments producing an almost electronic feel. When the actual electronic sounds entered they were mostly beeps and blips and gave a more alien flavor to the texture. Mallets were seen being applied to the piano strings, and the other instruments joined in sporadically, but with good ensemble. In the quieter sections the electronic sounds and instruments played off one another nicely, as if in conversation. To Warsaw with Love is an entertaining reminder that electronic sounds are much more than just a raw energetic presence.

The final piece of the concert was the world premiere of Sad Trombone (2015) by Isaac Schankler, scored for clarinet, trombone, cello, piano and electronics – this work was written especially for gnarwhallaby. Isaac writes: “The genesis of Sad Trombone is the quintessential sound of failure, the chromatic descending four-note motive that often accompanies a wrong answer on a game show, a pratfall, or a botched opportunity.” The piece opens with an electronic pitch of sine wave perfection and crystalline coolness.  This is soon joined by the cello and clarinet – at what sounds to be a slightly different pitch – but with the effect that the entire ensemble sounds like a series of precision oscillators.  A piano chord enters, adding a sense of menace and foreboding. A loud blast from the trombone signals the start of a number of syncopated and rapid passages of increasing intensity. The feeling borders on the chaotic but the texture is yet coherent – an amazing sound.  Far from being merely sad, there is a real sense of anxiety here.  A trombone solo with processed electronics follows and at one point the sound is like the roaring of a motorcycle racing away from a stop light. The electronics are effective in adding to the ensemble and always seem to be under control. Sad Trombone is ultimately a bit darker than its title might indicate, but provides a powerful example of how effectively electronic sounds can be scored together with acoustic instruments in capable hands; this piece fit in perfectly with the other works on the program.

The next People Inside Electronics presentation will be The Magnetic Resonator Piano on Saturday, April 18, 2015 (at the same venue) featuring performances by Nic Gerpe, Aron Kallay, Steven Vanhauwaert, and Richard Valitutto.