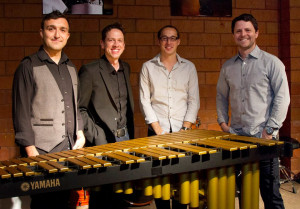 Friday night, April 10, 2015 and Zipper Hall in downtown Los Angeles was the venue for a concert titled I Hold The Lion’s Paw featuring the The Los Angeles Percussion Quartet. A knowledgeable crowd gathered to hear four pieces of percussion music that included a world premiere.

The first piece on the program was Mallet Quartet (2013) by Joseph Pereira, written for two vibraphones and two marimbas. Pereira writes about this piece: “Each pitch is considered on its own as a scale, of many timbral particles waiting to be examined. For the most part the focus is on the resonances, the attacks, and the overtones. Whether it is the playing technique used or simply the natural sounds of the instrument, these can all be exposed and manipulated in different ways, depending on the register they are in.” The metallic sounds of the vibraphones and the more organic tones from the marimbas provided a rich set of contrasts and possibilities that were exploited throughout this piece. From the very first chord that came crashing down from the stage there was the immediate sense of ‘many timbral particles’ flying through the air. The feeling was like being inside a bipolar grandfather clock with metallic clangs and twinges intermingling with wooden knocks and rapping. Rapid and independent runs from each instrument added to the general cloud of sounds that alternated between a metallic, industrial hardness from the vibraphones and a more comforting, natural sound from the wooden marimbas.

There were quiet stretches and these had the feeling of being in a dark basement full of active industrial piping off in the distance. At other times the tutti crescendos that increased in tempo as well as volume produced an energetic, industrial feel – but without becoming overwhelming. A variety of mallets were used to create a series of changing effects and textures from each instrument. Joseph Pereira’s experience as principal timpanist of the Los Angeles Philharmonic is embedded in the sinews of Mallet Quartet – the techniques for extracting just the right sounds and colors were masterfully scored and in this performance carefully executed.

Lullaby 5 (2013), by Nicholas Deyoe, followed and for this the stage was reconfigured with four percussion stations having, variously, marimbas, vibraphones, drums, cymbals and other assorted percussion. This began with a light tapping on a snare drum and then cymbals followed by a sharp report from a drum. Some bowed sounds were heard, a flurry of loud percussion, and then a quiet stretch. A mysterious feeling predominated in the softer spots and carried forward a growing tension that was periodically discharged by loud tutti drum rolls and cymbal crashes. The piece progressed this way with slowly rising levels of stress broken by sudden surges in volume and energy. A drum stick drawn over the surface of a cymbal was especially effective in one of the quieter places. The louder sections were vintage Deyoe, who demonstrated that he can bring his characteristic intensity and frenzy to a percussion piece. Lullaby 5 is reminiscent of Lullaby 4 – written for cello, trombone, clarinet and piano – and comprised of the same tension/release pattern heard here. Lullaby 5 is an exacting exploration of strong feelings along these same lines, proficiently expressed by the LAPQ.

The Year Before Yesterday (2013) by Shaun Naidoo was next. The program notes state that “Naidoo’s use of rhythm, form and melody creates a gorgeous and singular sound-world that truly expands the existing percussion repertoire. … This work was among the last that Naidoo completed before his early and unfortunate passing in 2013.” Scored for marimbas and vibraphones The Year Before Yesterday begins with low trills that lay down a nice bass foundation followed by a series of single notes that generate a feeling of building tension. We are walking deep into a dark forest, and the crescendos and decrescendos add a sense of adventure to the journey . There are stretches of syncopated melody that add energy and movement as well as slower sections – as if we are resting from our trek, surrounded by the sounds of the forest. The Year Before Yesterday is a marvelous sonic exploration of an unknown place, powered by percussion and our imagination.

After an intermission, the final piece of the program was the world premiere of I Hold The Lion’s Paw (2013-2014) by Andrew McIntosh. For this there were two percussion stations center stage and one each in the right and left balconies. The piece began with single notes struck on bowls at all four stations followed by chime tones. There was a sense of being surrounded by the sounds and an overall exotic feel. From time to time water was added to the bowls, raising their pitch and this became something of ritual throughout the performance. The vivid imagery and sustained sense of motion and movement evoked a kind of sojourn, as if we were walking along some strange path. At times it felt as if we had arrived at some fantastic, yet dangerous hamlet – the mix of percussion changing towards chimes, bells and cymbals – and a great flurry of sound that felt orderly and civilized. At other times it was as if we were caught outdoors in a violent storm, complete with sheets of rain and loud claps of thunder.

I Hold The Lion’s Paw is a large-scale piece and, as Andrew McIntosh quoted in the program notes: “To summarize Morton Feldman, the form of a piece of music over 20 minutes or so in length ceases to be concerned with structure and instead is about strategy. There is a point in any long piece where you lose an emotional connection to the shape as a whole, and the piece then becomes about the moment-to-moment flow of experience and memory.” If the journey was long – and it seemed as if we had circled around and revisited a place or two – the sounds were always interesting and the variety engaging. The spacing of the percussion stations between stage and balcony was used to good advantage. The coordination of each remote station – with the slight delays in sound arrival – was nicely exploited and precisely executed by LAPQ. Different stretches of the piece varied in dynamics, texture or color and the journey was enhanced by the presentation of ‘gifts’ to the listener – elements that were unexpected or the result of the placement of the different percussion stations. This piece has a certain resemblance to McIntosh’s Hyenas in the Temples of Pleasure, from a recent CD; the same sense of exotic exploration comes through. I Hold The Lion’s Paw is a vast, but always interesting work that extracts the maximum from the varied percussion pieces of the ensemble, and this performance was superbly realized by the LAPQ.