Ojai Music Festival – Sila: The Breath of the World by John Luther Adams 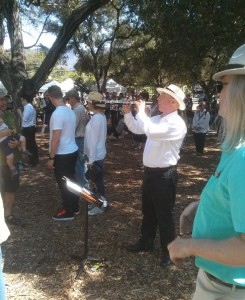 The 69th annual Ojai Music Festival featured the West Coast premiere of Sila: The Breath of the World by John Luther Adams, staged outdoors in Libby Park as a free community event. Performers from ICE, red fish blue fish and Cal Arts – some 80 musicians in all – were placed in selected positions in the center of the park and the audience was invited to move around and among them as the piece progressed.

Sila is an Inuit concept for the spirit that animates the world and marks the second outdoor piece by John Luther Adams at Libby Park. Inuksuit was performed here in 2012 under similar circumstances and was judged a great success. Sila is perhaps a more ambitious piece in that there are more players and a more diverse orchestration. Inuksuit is a dynamic percussion piece that was spread out over the entire park. Sila has strings, horns, woodwinds and voices organized into sections, all ringed by percussion stations. Sila probably occupied a bit less than half the area of the Inuksuit installation.

Sila is also a more delicate piece – its subject matter is intangible and highly spiritual. In a recent article by Tim Greiving the composer was quoted: “My image of the piece is really quite simple, It comes up, very slowly, out of the earth, out of these very low sounds — of bass drums and double basses and bassoons and tubas. And over the course of an hour or so, it just gradually rises up through this series of harmonic clouds and goes out and rises, and blows away in the wind.”

Sila opens with a great roll of the bass drums accompanied by sustained tones from the low brass. There is a primal, elemental feel to this that increased as the bass clarinet and oboe entered. The entrance of each section of instruments, in turn, contributed more sustained tones that gradually rose and fell in volume. The early parts of Sila were heard in the lower registers, but the sounds gradually rose in pitch over the course of the one hour performance. The musicians and singers slowly rotated as they played, adding a swirling effect to the texture. 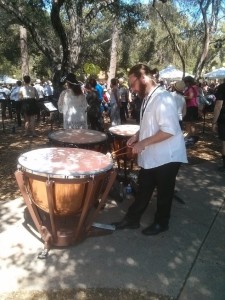 Microtones were notated in the score and the musicians were equipped with a cell phone app that helped to monitor the pitches and provide stopwatch time to mark the entrances of the various sections. There was no formal beat, but rather a series of long tones – always entering and fading – and producing a constantly changing color and texture to the sound. At times the ensemble sounded like a great sigh.

The crowd pressed in among the musicians and depending where one stood, there was a markedly different character to the listening experience. Standing near the woodwinds or voices, for example, one heard a lighter, ethereal sound while standing near the brass or percussion evoked a feeling of expansiveness and grandeur. Given its more diverse instrumentation, Sila is a much more position-sensitive experience than the percussion-driven Inuksuit.

About midway into the piece there were high trills on some of the xylophones while others were bowed and this produced a lovely mystical wash on top of the sustained pitches coming from the instruments. The soprano voices were also very effective when within earshot. The press of listeners as they moved among the players had a somewhat damping effect on the sound – especially among the higher woodwinds, strings and voices. The audience was quietly attentive and fully engaged for the entire hour. The piece gradually wound down in volume and in the final moments all that could be heard was the rushing sound of air coming from the instruments and voices. John Luther Adams was in attendance and acknowledged the sustained applause that followed. 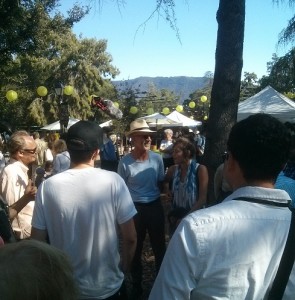 This performance of Sila was well matched to the Ojai Festival which, after all, is built on the idea of music outdoors. Much credit goes to the 80 musicians who had to bring off a subtle piece in the park setting and contend with microtones, stopwatches and the distractions of having their audience moving among them. The performance was successful, in part, because it involves the audience in a way that can’t be duplicated in the concert hall. Sila – and the other outdoor pieces by John Luther Adams – have added an important new dimension to the presentation of new music.