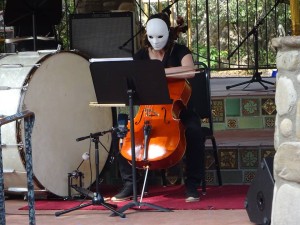 The International Contemporary Ensemble – ICE – was one of the featured groups performing at the 69th Ojai Music Festival. On Friday, June 12, 2013 ICE presented a varied concert of virtuosic pieces at the gazebo in the center of Libbey Park. A good-sized crowd turned out to hear the ICE artists play traditional acoustic instruments artfully combined with amplification and electronics.

Dan Lippel was first with Electric Counterpoint, a piece for guitar and tape by Steve Reich. The music was immediately recognizable as classic Reich and bubbled along with a satisfying groove. The playing by Dan Lippel here was seamless with the tape and the sound reinforcement system seemed to be up to the task of projecting out into the open spaces of the park. The recorded bass line was particularly effective when present and there was all the energy typical of the music of Reich. The piece unfolded in several sections that were variously festive or a bit more introspective, but all consistently active and upbeat. This was the perfect opening piece for the afternoon and the audience was visibly pleased.

This was followed by Jennifer Curtis and David Bowlin performing Apophthegms, a piece by John Zorn for two violins. This was very different and surprisingly complex music, with fast runs, flurries of pizzicato and unexpected changes in direction. Quiet passages followed loud sections, and fast, complex sections were followed by softer and more uniform stretches. Some of the quiet parts had a decidedly sinister feeling and a creaking sound from the violins added to the tension. The amplification, for the most part, worked in favor of the instruments although there were times when very soft segments were lost in the ambient noise of the park. As the piece concluded, a faster and more animated feeling took hold as the two violins weaved wonderfully bright and complex patterns that shimmered to the finish. Apophthegms is a virtuoso piece in every respect – from both a composing and performing standpoint. 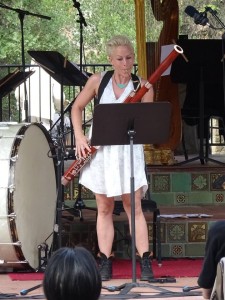 Rebekah Heller was next, playing Concatenation, for bassoon and electronics by Rand Steiger. This began with a low rumble of notes that seemed to be re-processed for echo and delay and then sent to the speakers – this nicely increased in density as the playing continued. The sounds soon came in rushes with great clouds of notes pouring out over the audience. There were also slower sections where the sustained bassoon tones and electronics gave a distant, lonely feel that contrasted well with the busier stretches. These sounds were pleasantly matched to the backdrop of oak trees and shrubs, perfectly at home in the woodsy surroundings. As bursts of notes echoed away, it was as if the music was receding back into a forest. The sound also seemed to move from left to right at times, giving a convincing sense of motion and movement. A low trill accompanied by some futuristic electronic sounds at the conclusion gave the impression of a flying saucer rising rapidly upward, taking off and leaving the earth behind. Rebekah Heller’s performance – played with out a score – was a triumph of energy and concentration and the audience responded with enthusiastic applause.

Nuiko Waddenh followed with Polvere et Ombra a piece for solo harp by Suzanne Farrin. This began with a series of rapid arpeggios, fast notes and a low strumming sound that gave a somewhat darker edge to the piece. There was a sense of rapid movement and velocity throughout and a series of sharp, furious chords that were expertly delivered. Towards the end the feel of the piece turned a bit lighter, but still mysterious, becoming very quiet at the finish. The amplification was both necessary and precisely applied to allow the naturally soft harp to be heard in the open spaces of the park.

San, by Du Yun, a piece for cello and electronics was next, and this was performed by Katinka Kleijn. Ms Kleijn took the stage clad completely in black and wearing a white mask. A large bass drum, equipped with a foot pedal, was situated next to her chair. The piece began with low, scratchy tones from the cello and several solid strikes on the bass drum gave this a very Asian feel. Some higher knocking sounds coming from the electronics – and the white mask worn by Ms. Kleijn – added a strong sense of ceremony and ritual to this. As the piece progressed there were complex, layered sections that alternated with slower and more somber stretches. There was a sense of struggle woven throughout and as the piece concluded the percussive sounds in the electronics and the striking of the bass drum conjured images of a violent battle. The complex playing, the combination of electronics, a bass drum and the wearing of the mask were all smoothly handled by Ms. Kleijn who delivered a spirited and drama-filled performance. 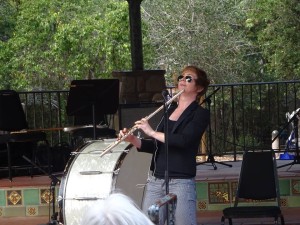 Next was a piece by Mario Diaz de Leon, Luciform, for flute and electronics. This was performed by Claire Chase and began with some light trills and rapid runs from the flute with a kind of low roar in the electronics that seemed to be moving slightly in pitch. This soon became very complex in the electronics with the flute supplying a series of fast repeating phrases. The pace slowed and the flute took up a low, dark melody while the deep roar returned to the electronics, producing an overall sense of menace. As the piece continued the electronics became very active and the volume increased, as if sending a warning. The tension increased in the somber flute, evoking a melancholy sense of pervasive alienation and the piece concluded with a frenetic finish. Luciform was another instructive example of how electronics and solo instruments can be artfully combined given good writing, playing and sound engineering.

The final work on the program was Rock Piece by Pauline Oliveros and this was performed by all the ICE musicians. They began in front of the audience, each with two smooth ocean rocks, striking them together more or less randomly. There is not supposed to be a common beat or volume in this – your brain actually works to find rhythms and counterpoint from the perceived sounds. As the players fanned out into the audience, the sounds of the striking lessened and became more diffuse. The players slowly returned back to their starting point and the sounds again became more distinct. The outdoor acoustics ultimately worked against the hearing of this and the one piece in the concert that was performed without electronics seemed to suffer the most.

This concert by ICE provided a lively and forward looking series of pieces that featured exceptional playing and impressive writing that skillfully combined the strengths of acoustic instruments and electronics.