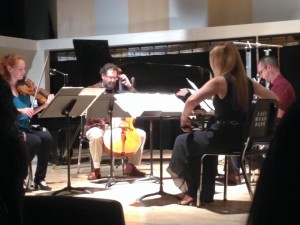 The Los Angeles chapter of the American Composers  Forum (ACF-LA) held its annual meeting and concert over the weekend of September 11-12, 2015 at newly-refurbished Clausen Recital Hall on the campus of  Los Angeles City College in Hollywood. Many of the groups in Los Angeles doing new music participated, and the resulting concert was over three hours long, requiring two intermissions. The 200 seat venue was completely filled, mostly by performers and composers. The night before there was another ACF-LA concert by wildUp at REDCAT in Disney Hall, so in just a couple of evenings you could have enjoyed a good cross-section of the local new music scene.

The evening began with greetings from Jack Van Zandt, ACF-LA Chapter President and Dr. Christine Park, Chair of the Music Department at LACC. Each performing group also had a spokesperson give a short introduction about the music and goals of their respective organizations.

The first to present was People Inside Electronics and Brightwork newmusic came on stage to perform like dreams, statistics are a form of wish fulfillment, by Benjamin Broening. The electronic re-processing of the acoustic sounds from the Brightwork ensemble gave this a shiny, shimmering feel that contained some lovely tones. Silences between the passages allowed the electronics to deliver ghostly echoes that added to the ethereal feel. There was a beautiful flute solo and some bowing of the vibraphone bars that seemed to cast a spell. Benjamin Broening was present – as were most of the composers – and he acknowledged the applause and the fine reading by Brightwork.

The second piece presented by People Inside Electronics was Sad Trombone, by Isaac Schankler. The group gnarwhallaby was on hand in their trademark black coveralls to reprise this work, having premiered it in March of this year. This is a trombone concerto that includes piano, clarinet and cello in addition to reprocessing electronics. Sad Trombone is a fearsome combination, with dark textures, piano crashes, lively syncopated tempos and primal trombone sounds supplied by Matt Barbier. All of this is taken into the microphones, reprocessed, amplified, and returned to the speakers mounted over the stage. The result was a powerful, complex sound that washed over the audience in great waves. The ensemble playing was excellent given the difficulty of the music and the strong presence coming from the speakers. The energy and power in Sad Trombone and the muscular playing by gnarwhallaby was enthusiastically acknowledged by the audience.

WastLAnd followed and their first offering was Invisibility for solo cello by Liza Lim and performed by Ashley Walters who began playing this piece with the hair of the cello bow wound around the shaft. This produced a raspy, complex sound, yet one that always seemed under control. The coarse texture and the rough, scratchy sounds gave a characteristically gritty feel to this. Midway through, a conventional bow was substituted by Ms. Walters and the sounds became smoother and more purely musical while still retaining the complexity of the opening. The tempo slowed and the sound became a bit thinner and then Ms. Walters began playing with both bows at the same time on the open strings. The combination of rough and smooth textures was very engaging and the audience cheered this remarkable display of virtuosity as Invisibility concluded.

Soprano Stephanie Aston followed to sing Dithyramb (from Tongues) by Jason Eckardt and this began with a series of high notes in vocalise and then a roller-coaster series of pitches. Clicks, chirps, clucking, word fragments and hissing sounds were heard and these were combined with pure musical tones . It was as if some foreign language was being used in an attempt to communicate. The rapid shifting between vocal sounds and musical pitches was deftly handled by Ms. Aston, who displayed exceptional focus in this challenging piece.

The talents of Stephanie Aston and Ashley Walters were combined in Hin und Weg by Brigetta Muntendorf. This piece included a wide variety of extended techniques on cello with a complicated mixture of pitches, vocalized sounds, German words and short phrases in the voice. The result was a complex sound that achieved a surprisingly even balance between cello and voice. The communication between Ms. Aston and Ms. Walters was impressive and there was a fine precision in the ensemble as the rapid, rhythmic passages unfolded. Hin und Weg proved to be an excellent showcase for these two fine artists.

Pacific Serenades was next and performed Batik, a piece for piano and violin by Mark Carlson inspired by an immigrant’s story of coming to the United States from Indonesia. The violin was played by Tereza Stanislav with Aron Kallay at the piano. This piece consisted of two movements and the first, Waves, began with a low, elegant tone in the violin and a dark undercurrent of arpeggios from the piano. A sense of the unknown was present in this and at times there was a sense of danger and drama as well. The piano was in a supporting role here and the violin writing was extraordinary for the range and intensity of emotions that were touched. The second movement, The Homeward Heart, began more optimistically with a bright sunny piano riff. A mournful feeling, however, was heard in the violin that suggested homesickness with a touch of bittersweet sadness. The violin part was again very powerful and moving, reminding us how much emotion can be extracted from this most empathetic of musical instruments.

Synchromy was up next and they offered several varied works. The first of these was Five oh Won See 3, by Jason Barabba. This was an inventive piece that consisted of the dry, legalistic text of Synchromy’s 501c official non-profit status acceptance letter set to music. Scott Graff provided the clever baritone vocals with Aron Kallay on piano and Nick Terry on various and sundry percussion. This playfully entertaining piece was a nice interlude from the serious music of the evening and great fun for the audience.

Subtone by John Franzen followed and this featured the recorded sounds of what seemed to be a subway line, complete with the roar of heavy machinery, flowing water and the squeal of brakes. This created a sense of powerful movement against which Brian Walsh’s clarinet wove tones in and out of the electronic tracks – the clarinet phrases seemed to be making a commentary on the background rumble. Gradually a voice emerged from the jumble of industrial sounds, sounding chillingly like a train announcement: “We cannot contract out of humanity” – and the piece ended. Subtone is a fervent editorial against the hyper-mechanization of our daily life.

The Nap Dragon by Kenji Oh was next and this was scored for flute. clarinet, violin and cello. This had an open, organic feel and motion in the strings with bright sounds in the woodwinds. The summery, sunny sense of this piece made for a good contrast with Subtone. Mbira, a piano piece by Vera Ivanova followed and this featured a mysterious, repeating phrase that had a slightly sinister feel. Close harmony, mesmerizing rhythms and an active melody added to the Halloween feel. Aron Kallay, whose workload in this concert seemed only to grow, performed in his usual solid fashion.

Quiet Harbor by Nick Norton followed and this was also scored for flute clarinet, violin and cello. This opened with pizzicato notes in the cello and a high, piercing dissonance in the woodwinds. A series of violin passages imposed a certain calmness and melancholy that was complimented by a solid bass clarinet line. The eclectic mix of timbres was solidly orchestrated and there was a nice tutti passage that sounded faintly Coplandesque. Quiet Harbor proved to be a smooth and elegant anchorage.

The Salastina Music Society presented one of the more interesting compositions of the evening, String Quartet, by Reena Esmail. Brian Lauritzen of radio station KUSC introduced this music which was four movements of classical Indian ragas as played by the standard western string quartet. Each of the traditional ragas – or scales – were sung prior to each movement and the string quartet followed with a sort of prelude based on the tones. As the sections progressed, more complex interpretations evolved and the sound at times was reminiscent of early 20th century music. The use of the western string quartet was a brilliant stroke – traditional Indian instruments can make this music sound so exotic that it can be hard for the uninitiated to absorb. Coming through the familiar lens of violins, viola and cello however, it is clearer to westerners how subtle and sophisticated this music can be.

The final presentation of this long evening was from Tuesdays@Monk Space . Endangered Voices: Wayaná Songs by Jason Heath was performed by Brightwork newmusic. This piece featured woodwinds, strings, piano and percussion that was activated by sounds sensed by a transducer that seemed to be filled with liquid. As drum brushes were rotated around the sensor, the unattended snare drum suddenly erupted in a rapid roll. The other instruments added a remote, exotic feel and as the piece progressed it was as if the percussionist had become a magician, activating the snare and other drums by gestures and movements, seemingly out of thin air. This created a convincing sense of mystery as if we were journeying through an exotic and magical landscape. Endangered Voices: Wayaná Songs is an intriguing example of the contribution interactive instruments will make in the future of new music.

The American Composers Forum concert was a convivial and festive event that brought together those who are most active in new music in Los Angeles. It was a way for each organization to preview their coming season and add to the critical creative mass here on the West Coast.

Performing in the ACF concert were: