On September 15-18 at Spectrum, Collide-O-Scope Music begins its eighth season with a Festival celebrating the music of Robert Morris. A wide range of works will be featured, for electronics, piano, small chamber ensemble, and string quartet. In addition to Collide-O-Scope personnel, there will be guest performers, notably JACK Quartet. I recently interviewed Morris about the upcoming concerts: our exchange follows. 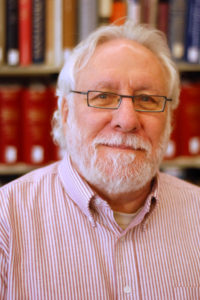 How did this Festival of your music come about?

Out of the blue, on April 20, 2015, I received an email from Augustus Arnone proposing this festival of my music. I had never met Augustus nor heard him play in person, but I knew of his great pianistic talent and industry in playing the complete works of Milton Babbitt and the complete “History Of Photography In Sound,” by Michael Finnissy. I knew also of his new music ensemble called Collide-O-Scope. He proposed that the festival should feature my piano works (of which there are many), my small ensemble pieces, some of my electronic works, and string quartets, which would be played by the JACK Quartet. The members of the JACK were once students at Eastman where I teach, and two of them had studied composition with me. They have premiered two of my string quartets: Arc (1988) and Allegro Appassionata (2009) written for them. They will also play my most recent quartet called Quattro per Quattro (2011).

Why was Spectrum picked as the venue?

Spectrum is a New York City performance space that is well known for presenting progressive art and music. Collide-O-Scope has played there many times. In the last five years, more intimate informal performances spaces, by contrast with concert halls, are becoming the norm for new music concerts and events. This is perhaps a tradition that stems from the old NYC downtown music venues of the 1980s and 90s for alternative and improvised music.

What will the pieces for electronics be like? How do you think they will resonate in an intimate environment like Spectrum?

The electronic/computer music pieces are not that loud as such things go. One of the two pieces called Mysterious Landscape is quite intimate in character, while the other piece, Entelechy 2012 for piano and electronic modification, is sometimes brash and dramatic with subtle, timbreally unique gestures often including microtones, vibrati and glissandi—categories of sound impossible to produce on acoustic keyboard instruments.

These two pieces, both composed in 2012, complement each other in other ways. Mysterious Landscape is an improvisational electro-acoustic piece lasting about 30 minutes to be played by one or two performers. It complements my desire to connect music with nature as in my outdoor pieces. Here the sounds and processes of nature are brought inside a performance space so that natural sounds—birds, insects, frogs, mammals, wind, and water-—are mixed together with computer-generated sounds to project a serene sonic environment that reflects on a peaceful relation of humans to nature. I will play the piece with a video slideshow using landscape photographs I took in the southwest and eastern United States, south India, Sri Lanka, and Kyoto, Japan.

Entelechy 2012 is quite a bit more abstract in structure and design. It also involves indeterminacy, but of the composed type; in this case, two isomorphic, composed out structures are played against each other in a different coordination from one performance to another. This underlying structure is based on a ring of 24 elements that include all the permutations of four elements once each. This ring guides the timbres, gestures, and pacing of the piece. However it does not produce a sense of stability or unity in any of the performances. Rather the composition is designed to be radically impermanent, providing surprising and novel experiences as it moves on, as much as in jerks or surges as ebbs and flows. Incidentally, The word “entelechy” was coined by Aristotle to refer to the condition of a thing whose essence is fully realized, implying an actuality that directly stems from some potential idea or concept. Augustus will play the piece with sound modifications that are not controlled by a live performer.

Both pieces use MAX-MSP patches

More on these pieces can be found on my website:

Do you enjoy being part of the performances of your electronics installations?

Yes, I do. I enjoy improvisation, on one hand, and being in control of the nuance of the electronic sounds, on the other.

You’ve frequently composed for piano. What draws you to the medium?

I began playing piano before I could read music and took lessons.  Even today, I improvise as much as I play written-out compositions; however in recent years, I play for myself only. Thus the piano has been the instrument on and from which I get musical ideas of all sorts, and is often the medium in which I try out new compositional ideas and modes of expression. I like to contrast the percussive and dynamically mobile character of the piano—which you find most prevalently in jazz of all types–with the colorful and intimate resonances found a good deal of new music. You might say, Bartok, Stravinsky and Babbitt versus Debussy, Boulez, and Feldman.

The piano program contains the premiere of a new work, Foray (2016). What were some of the compositional ideas you worked with in this latest piece?

Foray was directly influenced by Augustus’s playing, which I finally heard live last spring in a Collide-O-Scope concert featuring the music of Milton Babbitt and some younger composers. His remarkable ways of voicing and articulating piano sound made a big impression on me. So in mid-July an idea for a piano piece popped into my head and the character of the piano ideas was something I thought Augustus would like to play, so I dedicated the piece to him. The basic idea of the piece is that an opening series of ten chords arranged in an arc (maybe a rainbow, since each chord is of a different harmonic “color”) each generate music in subsequent sections of the piece. Thus the form is the arc followed by ten sections in different registers and densities. As the music goes on, the derivation of the music from the chords gets progressively more complicated and obscure in the way the music is parsed, registered, and embellished. The process is from isolated objects to mixtures and blends—an entropic process.

By the way, the other pianist on the program, Margaret Kampmeier, is also playing music I dedicated to her: from my Nine Piano Pieces.

Have your works been performed before by Collide-O-Scope Music? What does their ensemble bring out in your work that perhaps others don’t?

Well, not exactly. Some of the players who are members of Collide-O-Scope as well as guest artists on this festival have played and recorded my music. Sunghai Anna Lin (violin), Margaret Kampmieier (piano), Marianne Gythfeldt (clarinet) and Tara O’Connor (flute) were once members of the New Millennium Ensemble that played and recorded my sextet Broken Consort in Three Parts, as well as other pieces over the years. These are wonderful musicians who understand how to interpret the multiplicity of structure and expression in my music.

Could you tell us a bit about the ensemble works that will be heard on the festival?

Traces (1990) for flute and piano was commissioned by the National Flute Association in 1990 as a contest piece. As the title suggests, the piece moves forward by tracing and retracing various melodic lines in the piano by the flute and vice-versa,

Raudra for flute alone was written for Elizabeth Singleton in 1976. It takes its name from the fourth of the nine “rasa’s” of Indian music and dance, connoting the mood of fury and anger. I’m looking forward to Patricia Spencer’s performance.

Along A Rocky Path (1993) was composed for the Arlington Trio (violin, clarinet and piano).  Like many of my pieces, Along a Rocky Path reflects aspects of natural landscape—especially less frequented and more rugged terrain. Shortly after completing the piece in January 1993, I came across a poem of the eighteenth-century Japanese poet, Uragami Gyokudo, from which I took the title of my trio.

There is no heat on this rocky path,

The sound of the water from a mountain stream is most pure,

By the red leaves, I know there must be a man’s hut nearby;

My traveler’s path is hidden in the white clouds.

Over the twisting path hang the waterfalls of Mount Lu,

The plank roads of Szechwan cross the steep mountains.

There is no need to bemoan the journey:

Wherever I chant my poems is home.

Out and Out (1989) was composed for Marianne Gythfeldt in the spring of 1989. It concerns the interplay between the two instruments; the clarinetist and pianist interact to shape the musical continuity, often doubling each other’s notes and rhythms. The resulting demarcation of one musical line by another affects every aspect of the piece, producing exceedingly great reaches of reference, pulling together music from every part of the piece.

Drawn Onward (2014) is a recent work for violin and piano written for the Irrera Brothers, an emerging violin/piano duet. The title of the piece involves a palindrome that is embedded in the following longer palindrome: “Are we not drawn onward, we few, drawn onward to new era?” The idea of a symmetry inside another symmetry is at the heart of the composition. For instance, each of the two players has their own musical materials, but the violin material is embedded in the piano material and vice versa. Since the two performers from whom I wrote the piece are brothers, I thought that working with mutually embedded materials an apt way of composing a piece particularly for them.

Did the JACK Quartet work with you when they were at Eastman?

As I mentioned earlier they did as composition students, but they were not the JACK Quartet yet. You can read about the interactions we have had in the following interview article: “Interview with the JACK Quartet, John Pickford Richards, Ari Streisfeld, Christopher Otto, Kevin McFarland, And Joshua B. Mailman,” Perspectives of New Music, (2014) 52/2.

String quartets often are particularly significant pieces in composers’ respective outputs. How would you characterize the quartets that will be heard on the festival?

Although I wrote a string quartet in 1976, Arc of 1988 is my official first quartet. Due to the difficulty of the music, I had to wait 21 years before it was played. The JACK decided to learn it in 2008 and have played it here and there since then. The second quartet, Allegro Appassionata, was written for the JACK in 2009 for a special concert at the Tank in NYC. The third, Quattro per Quattro was premiered and recorded by the Momenta String Quartet in 2014 with Benjamin Boretz’s string quartet, Qixingshan. Now I will hear the JACK’s interpretation!

Are these quartets significant in my output? I think yes: they are all extended, ramified compositions; each embodies a harmonious relation between singular compositional craft and intense emotional particularity; each is quite challenging for the performers. But as your question implies, string quartets are considered the high-water mark for composers of all stripes. I can only hope my quartets will be appreciated as such.

(pre-concert discussion with Morris at 7pm)

(pre-concert discussion with Morris at 7pm)