Noon to Midnight at Disney Hall – 1 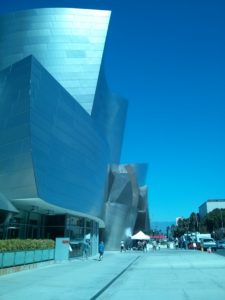 The first Green Umbrella concert of the season was held on Saturday, October 1, 2016 at Disney Hall in downtown Los Angeles. The LA Philharmonic hosted Noon to Midnight, a series of ‘pop-up performances’ and events that included works by numerous local contemporary composers and music ensembles, two sound installations, and an evening concert by the LA Phil New Music Group titled Four World Premiers. Some 16 different events were scheduled over the entire day, starting at noon, and were sited at various venues within the Disney Hall complex. The combination of a sunny fall morning, minimal downtown traffic and a large, enthusiastic crowd made for a festival atmosphere, with everyone moving cheerfully about, partaking of the various presentations. 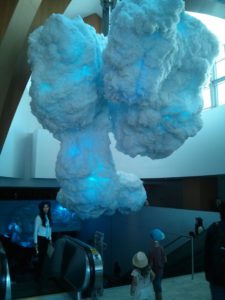 Nimbus, a sound/performance installation created by Yuval Sharon and Rand Steiger, was invariably encountered first, suspended as it was in the space above the long bank of elevators that lead from the parking structure deep beneath Disney Hall up to the lobby. Described in the program as “…an installation that transforms a transitional space into a performance site…” Nimbus is a fanciful simulation of a rain cloud – the fluffy, cotton-candy variety – whose interior lighting and music accompaniment change with time over the course of the day. Twenty-plus sections of music were written for Nimbus by Rand Steiger and recorded by members of the Los Angeles Philharmonic, (or created from recorded samples), sung by guest vocalists and even electronically extracted from filtered escalator noise. The mystical sights and sounds of Nimbus perfectly set the mood as people ascended upwards to the lobby. The soprano voices of Kirsten Ashley Wiest, Ashley Cutright and Hillary Young singing in just intonation were especially memorable for their feathery, ethereal glory. An added touch was the continuous procession of uniformed performers holding hand bells and striking solemn tones as they rode up and down the escalators among the entering patrons.

Because the scattered events of Noon to Midnight overlapped somewhat in their starting times, it was impossible to see everything. Here is a summary of some of what was happening during the day. 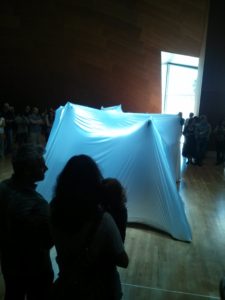 The festivities began at 12:15 with the world premiere of Porcupine for tent, quintet, bows and elbows by Ana PRVACKI, by Veronika Krausas. This was commissioned by the LA Phil and featured five players from the bass section clustered under an opaque, white tent. The tops of the instruments looked like so many tent poles as they played within. Occasionally an arm could be seen in outline, or a bow would project momentarily into the top of the tent. This added a kind of choreography to the piece – when the playing was rapid or intense, the movement of the tent followed accordingly. In slower or quieter sections the stillness of the fabric tended to focus attention on the sound. The piece had enough variety – solemn and quiet stretches along with fast runs and busy phrases – so that the motion of the tent exhibited a number of different appearances. The formal feel of the bass music coming from inside was countered by the playful vision of a moving tent, and the overall effect was something like watching a living organism, moving and shaking as if animated by the music. By including this unorthodox motion and movement of the tent, Porcupine for tent, quintet, bows and elbows by Ana PRVACKI adds an important dimension to performance that is otherwise masked by our standard expectation of performers in tuxedos. 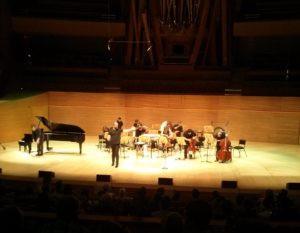 At 1:00 PM wild Up appeared in the main auditorium, led by Christopher Rountree who conducted four original pieces by participants in the 2016 National Composers Intensive. This is a program that “…offers young composers aged 18 to 30 the opportunity to gather in Los Angeles for an immersive multi-day workshop and have their works performed…” Rountree explained that the pieces chosen for this concert were selected on the basis of clarity and consonance with the composers’ voice.

Una Corda by Katie Balch was first and this began with a strong tutti chord dominated by percussion that projected an otherworldly feel, pleasantly spacey and not scary. The texture was clear and balanced with effective orchestration in all sections. Una Corda included a prepared piano, ably manned by Richard Valitutto, and this produced a distinctively percussive sound that added nicely to the atmospherics. Repeating figures rippled precisely through wild Up and at times the rhythms became active and intense. A full tutti crescendo surged upward towards the finish as a lovely trill in the piano trailed off into silence. Una Corda is a well-crafted soundscape that displays full command over all of its musical elements.

Wired, by Ali Can Puskulcu followed and this immediately lived up to its title with a large chaotic crash in all parts – eventually brought to order by the steady beat of a bass drum. As the piece proceeded, it turned even more frenetic at times, but always coherent as the phrases flashed by. A fine viola solo about midway through provided a more tranquil stretch, followed by a loud piano crash that immediately re-escalated the tension. Improbably, a quoted fragment of what sounded like classical Christmas music found its way into the mix, playfully underlining the eclectic nature of Wired as it galloped off into yet more frenzied passages. All of this was cleanly played by wild Up, who artfully discharged the high energy inherent in this piece. At the conclusion Ali Can Puskulcu bounded onto the stage to acknowledge the applause, his animated liveliness the very definition of ‘wired’.

Sear, by Tina Tallon was next and this was an ambitious attempt to portray through music the effects of a perforated ear drum and resulting tinnitus as experienced by the composer. Sear begins with thin, very high pitches combined with a sort of rough, scratchy sound in the upper strings – an effective simulation of what could be a harsh ringing in the ears. After some moments this was followed by the soft sounds of air blowing through the horns and woodwinds, and the clicking and scraping from various other instruments. The piano strings were plucked, producing actual musical tones, and these slowly increased in intensity. More musical flourishes followed in the xylophone, flute and trombone, building to a strong crescendo that included a booming bass drum and distorted electronics. Ms. Tallon reports that some 2000 tiny bells – the kind you can get for Christmas tree decorations – were used to recreate the piercing upper harmonics of tinnitus and this proved very effective. Quiet returned, and the soft clicking and whispering resumed – only to build again into a harsh, almost painful surge of sound that reached new heights in volume – before ending in a sudden silence. Sear was a powerfully cathartic experience for the audience, who responded with cheers and fervent applause.

The final piece of the wild Up concert was gone/gone/gone beyond/gone beyond beyond by Thomas Kotcheff. This began with a series of forceful tutti statements followed by quiet, and then repeated. This alternation between powerful and soft continued with some nice piano playing by Richard Valitutto in the quieter stretches. A series of crescendos followed, led by some brilliant snare drumming, while a hint of tension crept into strings. A tutti section, dominated by excellent guitar playing followed, building up to a strong orchestral sound complete with raucous piano crashes. As the piece concluded, an extended coda brought to mind the climax of a big piano concerto. gone/gone/gone beyond/gone beyond beyond is a wild ride, fueled by the boisterous yet disciplined playing of wild Up.

Later in the afternoon, another local ensemble, Gnarwhallaby, convened in the BP Hall space to present three pieces. The first was the world premiere of Heart / Lung by Michelle Lou, commissioned by the LA Philharmonic. This begins with a mystical rattling, the sound of bells in the amplified electronics and a soft trombone tone. Mechanical sounds emanating from the electronics created a sense of being inside a machine. Three of the Gnarwhallaby players – the clarinet, cello and trombone – were removed from the keyboard a distance of some 30 feet. Although playing into microphones, this separation, the unconfined acoustics of the BP Hall space and ambient crowd noise from the adjacent walkway all combined to obscure the various sounds somewhat, flattening and diluting the texture. The instruments were often muted, providing a soft, empathetic counterpoint to the electronic sounds of the machinery. The idea of separation to enhance this contrast was well-founded, but a more intimate space might have worked better for Heart / Lung. Even so, the feeling of labored breathing came through effectively, and towards the end the mechanical sounds became rougher and more distressed before ceasing at the finish. Heart / Lung thoughtfully invites the listener to ponder the contrast between the mechanics of heart/lung function and the actual humanity of being alive. 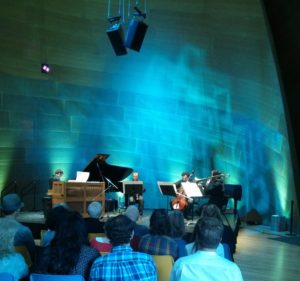 For the second piece, hatsik-1, by Ramon Lazkano, the players of Gnarwhallaby re-positioned themselves closer to the piano. Hatsik-1 begins with a series of mysterious phrases from the piano, soon accompanied by sustained tones in the clarinet and trombone. This piece has a dark feel, especially in the loud tutti chords led by the piano. The piano trades short phrases with the other instruments and the tension continues to increase, especially in the higher registers. The piano answers with a series of forceful cluster chords that are followed by a strong trombone response and high clarinet notes, increasing the tension still further right to the finish. The ambient conditions in BP Hall once again worked against any delicacy or detail, but hatsik-1 was powerful enough in its scoring – and in the playing by Gnarwhallaby – to carry through.

The final piece was Muzyczka IV (concert puzonowy), Op. 28, by Henryk Górecki and this has been a staple of the Gnarwhallaby repertoire for some years. This piece was written before the more well-known minimalistic Symphony No. 3 by Górecki and is an intense and forceful work requiring trombone playing on a heroic level. Matt Barbier has completely mastered this and Muzyczka IV proceeded in the first section with all its compelling dynamism – as if a pitched battle was unfolding before the audience. Despite all the musical fireworks – and with Barbier in full cry – the acoustics of the BP Hall worked against even this mighty sound, noticeably lessening its effect. At the tranquillissimo, ben tenuto section, there is the slow dirge-like melody in the clarinet and trombone that beautifully evokes a solemn melancholy – and this, sadly, was mostly obscured by the ambient crowd noise. The haunting, church-tower chords that ring out from the piano likewise suffered, vastly reducing their impact. Muzyczka IV (concert puzonowy) is a vivid portrayal of the finality of loss and Gnarwhallaby absolutely owns this work. All the more reason to regret the marginal listening conditions that confronted the large and appreciative audience.

There was much more happening at Disney Hall and a second review will cover some of the concerts presented later in the afternoon. The informal atmosphere, the excellent performances and the large audiences combined to create the ideal environment for new music here in Los Angeles. John C. Adams once again deserves much credit for organizing this first Green Umbrella concert of the season from among mostly local talent. Disney Hall management take note!