Noon to Midnight at Disney Hall – 2 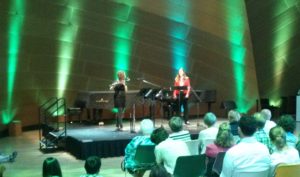 Saturday, October 1, 2016 was the Noon to Midnight event at Disney Hall consisting of a series of new music concerts, many by local groups. The event ran more or less continuously – here are some observations on what I was able to see and hear.

At 3:30 PM wasteLAnd set up shop in the BP Hall area to perform three pieces, including a world premiere by Nicholas Deyoe commissioned by the LA Philharmonic. The first piece was Invisibility (2009) by Lisa Lim for solo cello, performed by Ashley Walters. The opening section began with Ms. Walters holding a bow whose hair had been twisted into a coarse rope and this gave rise to a series of rough, skittering runs that immediately challenged the listener’s expectation of how a cello should sound. Ms. Lim writes, “The ‘invisibility’ of the title of the piece is not about silence, for the work is full of sounds. Rather, I am working with an idea of the invisible or latent forces of the physical set-up of the instrument. What emerges as the instrument is sounded in various increasingly rhythmicized ways is a landscape of unpredictable nicks and ruptures as different layers of action flow across each other.”

The result was musical, but with a density and texture that explore completely new territory. The acoustics of the BP Hall space, however, were not up to the task of transmitting the subtle details of this to the large audience, and the ambient noise of passersby on the adjacent walkway obscured many of the finer nuances. Midway through Ms. Walters changed to a standard bow, and the piece became much smoother, more delicate and more familiar. The rhythms increased a bit in complexity and the resulting sound seemed somewhat stronger out in the hall. Finally, Ms. Walters grasped both bow types – one in each hand – and continued with an amazing show of virtuosity by using them simultaneously. This produced a wonderful mix of rough and smooth textures as the “… different layers of action flow across each other.” Invisibility expands the sonic language of the cello in new and intriguing ways and this deft performance by Ms. Walters was received with strong applause.

Tout Oreguil… by Erik Ulman followed, featuring Èlise Roy on woodwinds and soprano Stephanie Aston. Ulmann is the featured composer for wasteLAnd during the current season. Ms. Roy and Ms. Aston began Tout Oreguil… with interweaving lines – a stabbing and thrusting feel from Ms. Roy – whose cutting sound seemed to dominate in this space – and a smoother, more connected sound from the voice of Ms. Aston. This interplay produced a gently haunting feel and midway through Ms. Roy switched to a bass flute whose deep notes added a sense of mystery. The longer, more connected notes now coming from the soprano might have enhanced this, but the acoustics of the BP Hall space were working against subtlety. Towards the finish, a nice counterpoint in the voice restored some balance. Tout Oreguil… is an intriguing work with artful passages and fine phrasing, deserving of a more intimate venue.

The final piece from wasteLAnd was Finally, the cylindrical voids tapping along, by Nicholas Deyoe and this world premiere was commissioned by the LA Philharmonic. Scored for flute, soprano, cello, bass and trombone, this opened quietly with high pitches in the strings soon joined by a warm soprano lead. The text for this piece was by Allison Carter, but the marginal acoustics of the space precluded any clarity here. This is soft music and was most effective when the soprano voice of Stephanie Aston dominated over the muted accompaniment underneath. The emotive range of Ms. Aston’s singing was especially beautiful and ultimately transcended the inaudibility of the text. As the piece progressed it acquired a more agitated feel, primarily in the muted trombone, and the color turned a bit darker in the strings. The precise playing here – and a somewhat louder dynamic  – worked to offset the ambient noise. The interplay of the various instruments also helped, but invariably it was the soprano vocals that decisively enhanced the atmosphere of this piece. Finally, the cylindrical voids tapping along is a finely crafted work, containing great empathy and compassion, and deserves to be heard in a more suitable venue. 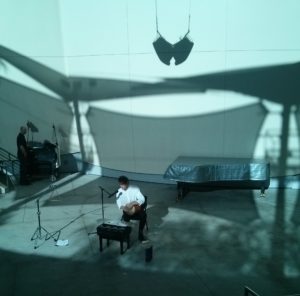 At 4:30 PM in the Keck Ampitheatre outdoors, Monday Evening Concerts presented percussionist Jonathan Hepfer who performed two solo pieces. The first of these was Le corps á corps by Georges Aperghis and this was sung in French by Hepfer who also played a single drum by hand. The vocals were very expressive, combining a variety of inflections and sounds as well as words. There were quietly smooth sections that alternated with sharper and louder segments. Some ingenious head movements – and moments of posing in complete stillness – created an engaging choreography. Even without understanding a word of French, Le corps á corps continuously entertained those sitting in the almost full ampitheatre.

Silver Streetcar for the Orchestra (1988), by Alvin Lucier followed and this was simplicity itself, consisting of a single triangle held up to the microphone. Hepfer began by setting a moderately rapid, steady beat and then proceeded to methodically modify the sound of the triangle by holding it in various ways and by striking it in different locations. The initial sound was a sort of dull clicking – Hepfer had grabbed one arm of the triangle – and as he slowly loosened his grip the sound contained progressively more overtones, adding a noticeable sparkle. This cut through some of the inevitable noise present in an outdoor venue downtown, although the Keck Ampitheatre is fairly well enclosed. As Hepfer continued to change the position of his hands and the location of the wand, the triangle issued an amazing variety of sounds, volumes and timbres. These changes were often subtle, but this served to increase the focus of the listeners. Silver Streetcar for the Orchestra is a remarkable exercise in the discrimination of small changes in sound from a transparently simple instrument.

Jacaranda occupied the main auditorium in Disney Hall at 5:30 PM for Trance Room, a concert of works by David Lang, Hans Abrahamsen and Steve Reich. The first piece heard was sleeper’s prayer by David Lang, commissioned by the LA Philharmonic and this was the world premiere. Lang’s work tends toward the spiritually introspective this new piece was scored simply, for pipe organ and boy soprano. Lang chose as his text some paraphrased Jewish bedtime prayers remembered from his childhood. The pipe organ began by laying down a nice moving line that worked effectively as counterpoint to the simple melody in the soprano. This had a lovely Medieval feel to it and would be at home in any church or cathedral. The soprano, who looked to be about twelve years old and whose name was unfortunately missing from the program, must be given much credit for his solo performance of an important work in a major venue before a large audience. Once or twice his voice seemed lost in the vast spaces of Disney Hall, but he bravely persisted and his exquisitely pure tones soared delicately above the busier notes of the pipe organ. This timbrel purity of the voice and the simplicity of sleeper’s prayer make this sweetly elegant music.

Schnee (Snow) by Danish composer Hans Abrahamsen followed, and for this a small chamber ensemble consisting of two pianos, strings and woodwinds took the stage. Soft, very high tones in the violin began the piece, soon joined by a quietly simple piano melody and a few clicks and taps. There was a period of silence, and the sequence was repeated. All of this was very subtle – almost inaudible – but it precisely evoked the sense of a light snowfall just beginning outside a big picture window on a deep winter night. The quiet rusting of the snow, a light gust of wind and the needle-sharp, icy tones all combined to paint a vivid picture in the imagination. As the piece proceeded, the second piano, woodwinds and percussion entered, adding a brighter, more blustery feel; you could practically feel the snow drifting outside. A soft, distant melody is heard, perhaps coming up from the town across the frozen landscape. Schnee artfully captures all of the elements that make the memory of a winter snowfall so wistfully nostalgic. 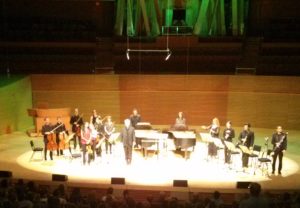 The final piece performed for the Trance Room concert was Eight Lines (1983) by Steve Reich, to mark the occasion of the composer’s 80th birthday. Donald Crockett conducted the full Jacaranda Chamber Ensemble. Eight Lines begins in a bright 5/4 meter with repeating syncopated lines from the two pianos and sustained tones from the strings. Woodwinds enter with complimentary phrases and the piece soon develops that solid groove so typical of Reich’s music from this period. The various instruments enter, add a new line for a while, then withdraw. A key change midway through made for a smile and the audience seemed to respond to the rhythmic optimism of this piece for the entire 16 minutes. Eight Lines feels like a compact version of the earlier Music for 18 Musicians; Jacaranda played with precision and verve and was repaid with sustained applause.

Noon to Midnight will be remembered as a great success for the Green Umbrella series – and a credit to John C. Adams who curated. Our local talent rose to the occasion and the enthusiasm of the large crowds attending should be a sign to the LA Philharmonic management to expand these kinds of events in the future.