The Makropulos Case in San Franciso 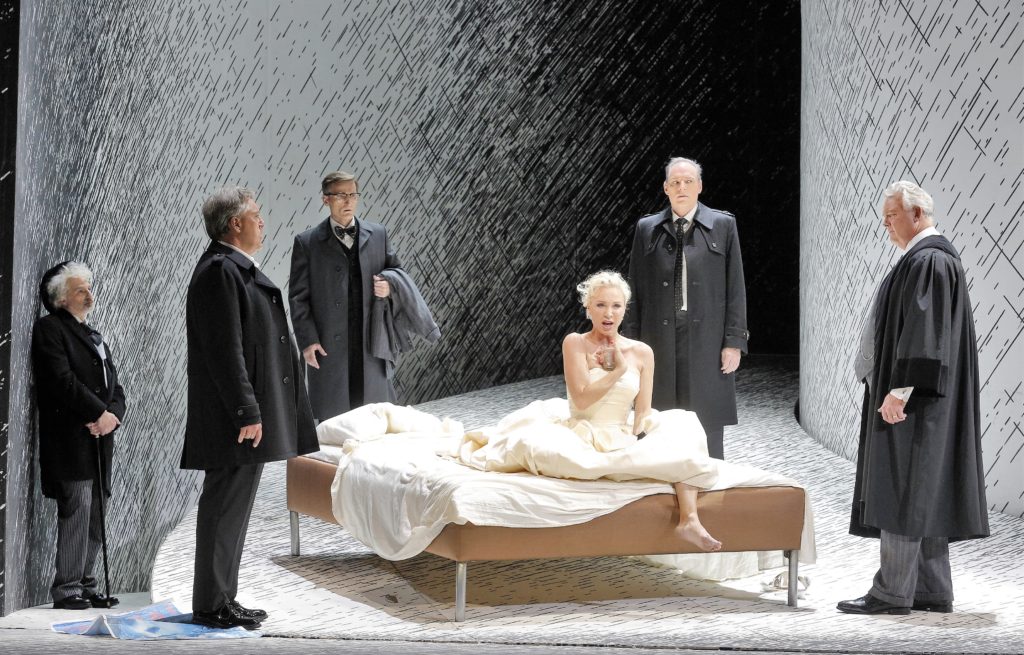 It’s never good to live in the past, but sometimes we have to, even though as our latest catch phrase would have it “it is what it is.” These are some of the thoughts which came to mind when I caught the last performance of San Francisco Opera’s revival of its 2010 production of Leos Janacek’s “The Makropulos Case ” (1923-26) which received its American premiere at this house in 1966. German soprano Nadja Michael, who as the over three-hundred-year-old opera diva Emilia Marty has traveled with more aliases than you could count on several hands, was its star. But the problem here wasn’t that Michael dominated the stage as every diva should do, but that her lovers, especially her principal one Baron Jarosalv Prus (baritone Stephen Powell) hadn’t the looks much less the presence of Tom Fox, who sang Prus in the 1990 SFO Lofti Mansouri / Elisabeth Soederstrom directed production I saw with Stephanie Sundine as Marty, who owned the stage just by walking across it. And that’s a major flaw because this opera if it’s about anything — and it isn’t about much — is about sex and how its myriad illusions about “love” have driven its “heroine ” and us through her multiple couplings. But come to think of it this might be THE perfect piece of music theatre for our tired but true 2016 US (s) election cycle.

Janacek (1854-1926) may have been a great Czech composer, but his book for The Makropulos Case (which is based on his fellow Czech Carel Capek’s play which he saw at its 1922 Prague premiere) is problematic, and even Capek doubted — and he told Janacek this — that it could be made into an opera. Its flaws are there from the get go. Act 1 scene 1, which is set in the law office of Dr. Koletany ( bass-baritone Dale Travis) goes on far too long. Janacek should have established his points quickly, and should have made this scene and many others a play within music instead of a play with music, and the only really theatrical juice it gets is when Ms. Michael enters and in 2016 fashion drapes her everything in sight over the office furniture, and with that decision almost every possible ambiguity, forget subtext, goes out the window. It’s the madonna/whore complex all over again, but this time we just get the whore, which is, if not an outright insult to Janacek and his source material, but a cheapening of his obviously earnest efforts to breathe life into it. Carmen may have been a girl who can’t help it, but at least Bizet supplied seductive and yes, entertaining music for her and her suitors, and Berg, while not writing exactly entertaining music for his doomed heroine Lulu in his eponymous opera, did at least give her the benefit of the doubt.

Olivier Tambosi’s staging with production designer Schollsmann’s mostly black and white look, save the completely literal bookcases-to-the-ceiling set for the law office, added very little. Ms. Michael’s transcendence/apotheosis in the very last scene didn’t work either, because neither book, music or direction, as played here, made her vulnerable for more than, say, twenty seconds. Marty may have made lots of mistakes in her three century plus life, but she must have had a few moments of real reflection or regret — don’t we all ? — and she did have some here, but these alas came and went all too quickly. She was after all “human all too human” in Nietzsche’s pregnant phrase, and if that doesn’t come across the boards we get next to nothing. Russian conductor Mikhail Tatarnikov, who made his house debut here, kept everything in sync with his precise no-nonsense stick technique, and the SFO orchestra responded with clear, vivid and vibrant playing throughout.