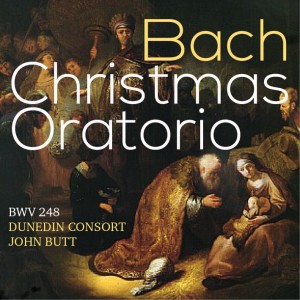 First, I’ll admit that at Christmas Messiah has most often been my jam; I have several recordings, have performed it as soloist, accompanist, and conductor, and find it to be one of the most uplifting pieces out there. This year the Dunedin Consort, led by John Butt, has changed my tune. I’ve listened over and over again to their new recording of J.S. Bach’s Christmas Oratorio.

The oratorio is actually a collection of six cantatas that were performed during a particularly festive Christmas in 1735. They cover Sundays from the beginning of the Christmas season to the Feast of the Epiphany. Butt has chosen to perform them with eight soloists, four each alternating between the successive cantatas, and four ripieno singers. The use of a relatively small complement of vocalists lines up with current Bach scholarship. Butt primarily employs soloists with two to a part in passages like the chorales. This emphasizes the contrapuntal character of the vocal parts, treating the cantatas as chamber music rather than the large choral works that they are sometimes presented as in less period-informed settings. (Butt’s notes on the history of the Christmas Oratorio and his particular performance choices for the recording make for fascinating and enlightening reading).

Chamber music yes, but the instrumentation is both varied and vivid. Part One features virtuoso trumpet parts and timpani, the second extensive writing for woodwinds, the fourth buoyant horn duos and an “echo aria” with an extra soprano, and the last cantata returns to the use of brass and timpani in its climactic passages (it also features an oboe solo during the standout soprano aria “Nur ein Wink von seinen Händen,” beautifully sung and played by Mary Bevan and Alex Belamy, respectively).

Butt elicits a performance from the soloists and Dunedin Consort that is fleet-footed yet flexible, cleanly rendered yet never overly cool. Indeed, some of the recitatives and solos are quite emotively delivered. The conductor has also wisely chosen soloists who complement both the textual and textural aspects of each of the cantatas. For instance, Nicholas Mulroy is the more forceful of the two tenors. He balances well with the defiant music and ebullient orchestration of Part Six, while the more sweet-voiced Thomas Hobbs is sure-footed in the fluid recitatives and arias of Part Four. While each singer brings a different timbre and demeanor to the table, they blend seamlessly in the ensemble passages and to a person share exquisite tone and abundant musicality.

This is a recording that made me completely rethink my impressions of the Christmas Oratorio. Now, instead of writing it off as the lightweight cousin of the Bach Passions, I am ready to consider alongside the composer’s best known choral music, going toe to toe with them both in terms of ambition and quality. Recommended holiday or anytime listening.