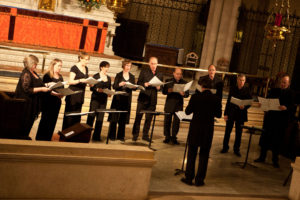 NEW YORK – On December 10th, the Tallis Scholars found themselves in a bit of a quandary. Scheduled to give their annual Renaissance Christmas concert as part of Miller Theatre’s Early Music Series at Church of St. Mary the Virgin, the ten-voice ensemble was decimated to nine. Long-time member bass Robert Macdonald was ill and had been rendered voiceless. Peter Phillips, the Tallis Scholars’ director, quipped from onstage that unless he sang, which the rest of the singers “felt unwise,” the group’s other bass, Tim Whiteley, would have to go it alone. MacDonald did not appear to be the only member suffering. During the course of the concert, there were several sniffles onstage and far more water being chugged than is the group’s usual practice. Gamely they had decided to appear regardless.

There was yet another wrinkle to the story. During the first half of the concert the Tallis Scholars had planned to feature Cipriano de Rore’s Missa Praeter rerum seriem, a composition that includes many divisi, including a number of passages where each bass has his own part. A substitution was in order, and the solution was a welcome one: Giovanni Perluigi da Palestrina’s Missa Assumpta est Maria. One of the composer’s last works, it demonstrates his movement from a more modal to a quasi-tonal harmonic method of organization. Although outnumbered, Whiteley never seemed vocally outgunned. Indeed, the Tallis Scholars’ long association helped them to rebalance their forces in seemingly effortless fashion. The clarity of lines and fine-tuned chords which resulted were truly remarkable sounding. 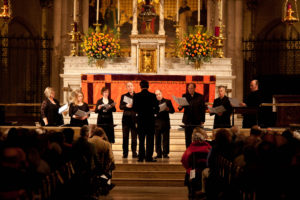 Although the audience had been deprived of De Rore on the first half, the second provided some compensation with a sprightly, joyous rendition of his Hodie Christus natus est setting. Magnificat Primi Toni, by Tomás Luis de Victoria, features antiphonal division of the choir into two four-part units. Fortunately for this occasion it doesn’t include bass divisi, but there are some stellar passages for high sopranos that arched angelically upward, as well as sturdy tutti declamation.

Victoria, Palestrina, and even de Rore are familiar composers to many Renaissance listeners, but the next two selections on the program, both Salve Regina settings, were composed by figures who aren’t yet “household names.” Based on the quality of these works alone, they should be. Claudin de Sermisy’s Salve Regina was filled with imitative counterpoint, including four-voice canons and fetching duets, which were delivered with abundant precision by the Tallis Scholars. Hernando de Franco, a Spanish composer who resided in Mexico, must have enjoyed setting the Salve Regina text – or at the very least been frequently requested to do so – there are five of them attributed to him. Here, chant was weaved into the fabric of the piece, interspersing thick-voiced passages of contrapuntal activity.

The concert concluded with O Splendor Gloriae, a composition that appears to have been a collaboration between John Taverner and Christopher Tye. The piece never feels like a ragtag assemblage, but there are significant differences among its various sections. O Splendor has a long-ish text, describing the Creation story from the Fall to Christ’s Resurrection and Ascension. Even after such a taxing program, and under harried circumstances, the Tallis Scholars brought a warm sound to bear here. This is no mean feat, as the work contains a number of high-lying lines. In addition to the sopranos who sustained these, Whiteley must be commended for his efforts. The bass brought sonorous support to the work’s chordal passages and hardy declamation during sections for subsets of the ensemble. It was a testament to the Tallis Scholars’ consummate professionalism that, despite challenging circumstances,  they made such stirring music.