Cazan, Gloss and Anderson at Betalevel in Los Angeles 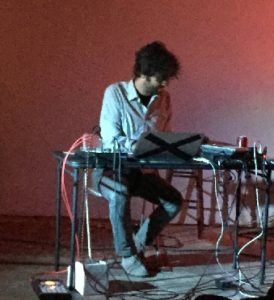 On Saturday, May 27, 2017 Betalevel was the venue for a concert of experimental music, spoken text and radio sounds as created and performed by Scott Cazan, Pauline Gloss and Casey Anderson. A nice crowd ventured into the colorful subterranean performance space on a quiet holiday evening in the Chinatown district of Los Angeles.

The first piece on the program was Grammar, by Scott Cazan, who presided over a computer table filled with cables leading to mixers and speakers. A section of the floor in front was filled with symbols and letters chalked onto the cement prior to the start of the performance. These markings acted as the score and represented the computer keystrokes to be applied as the piece progressed. Grammar began with a steady rhythmic beat, followed by a series of continuing trills in something like a marimba, all of which established a nice groove. After a few moments, a short burst of white noise was heard and this recurred on intervals of a few seconds. A deep bass tone entered, sforzando, and this was heard again after a somewhat longer interval. The result was to establish a congenial and layered texture, propelled along by the various recurring elements.

About a third of the way through a soft hissing was heard, increasing in volume until it obscured all but the low growls in the sforzando bass. The regular rhythmic elements became overwhelmed – leaving the listener without that reassuring reference – and the hissing sound became more menacing, like the scream of an out-of-control steam vent. A high metallic screeching was added to the mix, and the intensity increased to something approaching the sound of a dentist drill. The confined spaces of Betalevel amplified the piercing sounds – almost to the threshold of pain – but at just that point the squealing subsided and then ceased, allowing the bass tones and then the percussion to reappear. The original elements from the beginning reasserted themselves, restoring order, and slowly faded out in a peaceful ending. Grammar is an artful mix of the reassuringly familiar and the totally terrifying, with both possibilities hanging in the balance – a metaphor for these uncertain times.

Pauline Gloss was next with three text/sound works, First Piano Lesson, Trauma Response and An Integration, presented serially and without pause. This began with First Piano Lesson, a recording of a spoken piece, played through the speaker system. The stream of words first came singly, and then were repeated in various combinations and permutations; each phrase a clue that added to the total picture. The speech was processed through self-oscillating band-pass filters and this gave the text a thin aura of musical tones. As described on the sonospace.org website: “First Piano Lesson is a compressed coming of age story produced from accreted and recombinant language. The majority of the piece is built out of the materials of one 8 word sentence, whose purpose is to act as a sort of DNA of boyhood, both in terms of its syntax and language material. As the language repeats and is recombined, a story emerges.” This technique is surprisingly effective – the listener concentrates, parsing out the information embedded in the stream of words, while at the same time responding to the tone coloring and shape of the recited text.

About halfway through, the recording ceased and Trauma Response began, delivered live by the composer from the stage. The same process was employed – minus the acoustic filtering – and now the spoken words had a more immediate and intimate feel. The contour of the phrases depended more on the shape and sound of the words, and the patterns were assembled to convey different weights and textures. At times, even individual words were broken down into syllables and used in the stream of text. All of this was confidently delivered by Gloss, who had to contend with low lighting and the varied patterns of words and phrases in the score.

The second half of First Piano Lesson then resumed and the recorded words seemed even more rounded and softened by the filtering in contrast to the live speech. An Integration completed the set, spoken from the microphone, and this was perhaps the most forthright piece. The contrasting sharpness and smoothness of the word combinations was more apparent, exerting a more pronounced influence in shaping the overall emotional feel. Strong declarative words, short hard words and phrases containing opposite meanings were most effective. Phrases such as “Is not” and Is so” when repeated together provide a powerful double message from both content and texture. Although created from simple materials, these text/sound works operate at the intersection of cognition and emotion, expanding the vocabulary of art into new territory.

The final work on the concert program was performed by Casey Anderson, stationed at an audio console equipped with a PC, a 1 minute tape loop, amplifiers and an AM/FM portable radio. This piece was untitled, but Anderson’s compositions invariably involve broadcast radio and the process employed here was very straightforward: tune the radios until something is heard, let this play for a few seconds, and move the tuning again. Luckily the reception in Betalevel – deep under the streets and alleys of Chinatown – was adequate, and a variety of sounds were heard and looped as the piece proceeded. Sometimes a station came in clearly and intelligibly, bringing the usual commercials, sports or news. At other times, static was heard and because this counted as a sound, it was included in the sequence. Occasionally there were random squeals and chirps, and this added something of a musical dimension. The rapidly changing sequence of sounds challenge the listener to engage cognitively or emotionally, depending on the type of signal received.

Both AM and FM stations were heard, in all their many varieties. Faint stations, as well as those in a foreign language, prompted more intense concentration as the listener tries to put the newly received sounds into some sort of context. Stations clearly heard triggered emotions that depended on the content: casual interest for sports or news or perhaps disdain for some all-too-familiar commercial. As the various stations and static washed out over the audience, the brain was kept busy reacting emotionally or sifting for context. The individual listener responds to each stimulus, and this ultimately becomes an enlightening exercise in self reflection.

More experimental music will be featured in the coming Dogstar Orchestra series of concerts, running June 3, through June 17, 2017 at various locations throughout Los Angeles.