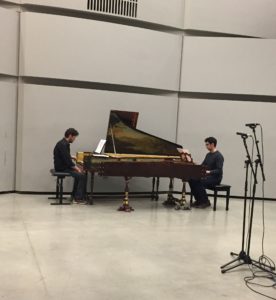 On Thursday, June 15, 2017 Dog Star Volume 13 landed at the Cal Arts campus for a concert titled The Mean Harpsichord. No fewer than three harpsichords were in place at The Wild Beast, where every chair was filled with someone interested in hearing experimental music at the cutting edge. The 2017 Dog Star Orchestra series, a local new music tradition since 2005, featured a total of eleven concerts this year and has been running at various locations all around Los Angeles since June 3.

The first piece on the concert program was Tasten, by Eva-Maria Houben and for this two harpsichords were employed, manned by Robert Holliday and Sepand Shahab. Two soft notes by Holliday began Tasten, followed by an extended silence. About 30 seconds later, and almost as an answer, three separate notes were heard from the second harpsichord. More silence followed, allowing the notes to ring out and slowly decay. This pattern continued with the sounding of one, two or a few notes by each harpsichord, followed by an extended silence between.

The two harpsichords seemed to alternate in turn, but not strictly, and the extended silences acted to draw the listener into a heightened level of concentration. It was as if each set of notes added a clue to some larger form or structure. There were occasional seven or eight note phrases, but no chords, and the sounds were never hurried. This is very spare music, and it often seemed like a quiet conversation between two people who know each other very well – perhaps after dinner on a dark porch – with the long silences actually adding to the communication. The score for this was not conventionally notated, but was rather a page of instructions followed by several more pages of symbols and letters that gave the harpsichord players their cues. Tasten reduces pitch, rhythm and dynamic content to the minimum while at the same time raising the listeners awareness in ways that are not otherwise experienced in a conventional musical performance.

Arianna (Monteverdi) by Mark So followed, and for this some 10 musicians with their various instruments gathered while a field recording of street sounds and construction equipment was heard over the speaker system. A solemn, deep tone was heard from something like a small hand-pumped portable organ accompanied by softly sorrowful notes from a violin. Harpsichords joined in as well as a cello, creating a feeling of disconnection and loneliness that was very effective in combination with the impersonal sounds coming from the field recording. All of this was slow and stately – there was nothing rapid or with a rhythmic beat. The texture was smooth and lush, and some lovely harmonies were heard at times among the various instrument groupings. A pop tune and then some faint voices were heard in the field recording that contrasted with a series of low, mournful chords from the portable organ and strings. The strongly expressive feel of this piece was the result of distributing small sections of an original Claudio Monteverdi score to the various acoustic instruments. There was no effort to quote this music per se, but rather fragments of chords and harmonies were employed in diverse ways to create the richly haunting mood. Arianna (Monteverdi) is an impressive example of the creation of a new contemporary piece fashioned from the musical DNA of a 17th century Italian master.

Shadow Earth, by Michael Pisaro was next and this was performed by Sepand Shahab at the harpsichord. This began quietly with a few short sequences of notes, followed by some simple chords that unfolded into a modest dissonance as the piece progressed. Counterpoint appeared in the lower registers and this led to a series of thick chords that precipitated a dark, mysterious feel. There was no continuous beat or pulse in this music, but rather a sequence of brief, disconnected passages; sometimes these included chords with harmony and at other times just a few singular notes. It was very much the musical equivalent of a woodcut relief print – where the total is the sum of the ink markings and the white space – so that the viewer’s brain forms the completed image. The abstraction of the sound that is heard in this piece partners with the listener’s imagination. Shadow Earth nicely evokes the contrasting darkness and light of shadows in the same way – the music paints only a part of the image and the listener completes the picture.

The Oracle at Delphi, by Laura Steenberge followed, and this was inspired by the ancient Greek religious sanctuary of Apollo on Mt. Parnassus. At Delphi the oracle would sit, issuing cryptic predictions and guidance to those who had come with questions. The language of the oracle could not be understood directly, but an interpreter would provide a written response to the questioner a day or two later. For this piece, vocalist Argenta Walther portrayed the oracle, robed and sitting in a chair, while wearing a roll of temperature sensitive paper tape about 4 inches wide that hung from a large necklace. The paper tape was drawn out across a small table where Laura Steenberge sat with a hot soldering iron. The tape was further extended to a harpsichord and rolled, scroll-like, onto a tuning fork.

Ms. Walther began humming and singing, and as this occurred Ms. Steenberger began making traces on the paper with the hot soldering iron while harpsichordist Sepand Shahab rolled up the paper tape. This resembled something like a crude ticker tape, the moving tape received markings as the soldering iron wiggled in reaction to the singing voice of the oracle. When the marks on the tape reached Mr. Shahab some moments later, a series of notes or chords were played from the harpsichord. When there was no sound from the oracle, sections of blank tape were scrolled over. It took about 20 or 30 seconds for the tape to move from the soldering iron table to the harpsichord, a distance of several feet. All of this was an abstract representation of the original process at Delphi – the oracle humming and singing, an interpreter in the form of the soldering iron making marks on the paper tape, and the translation of the message by the harpsichord. This was engaging to watch and to hear, and could have also been a metaphor for the process of composition – the oracle as the inspiring muse, the composer notating the tape with a soldering iron, and the harpsichordist as musician reading and playing the score. The Oracle at Delphi is an engaging combination of performance art and music that ingeniously operates on several levels. 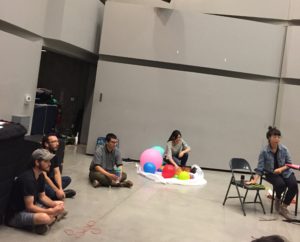 let it go beyond a certain point was next and a total of seventeen performers sat in a large semicircle, each holding a device of some kind. Some of these items made sounds while others seemed more symbolic or active. Near the center of the semicircle one performer was inflating large toy balloons with a hand pump and with each stroke the balloon grew, until it burst with a tremendous bang. At this point several of the others became active – one fired large rubber bands across the room, another snapped a large twig in two while yet another let loose a blast from an air horn. A second performer began to feed out a tape measure vertically a few inches at a time. Higher and higher it went until it was extended several feet, and then, leaning from its extended weight, suddenly collapsed. This was the signal for more actions by the others – a trumpet sounded, inflated balloons were popped with a pin, all accompanied by other assorted noises and tones.

In one sequence, the string of a small harpsichord was twisted increasingly tighter with a tuning wrench as its note was sounded. The pitch rose, unnervingly, as the tension in the string increased until it finally broke with a loud twanging sound. All of these staged events did much to increase the anxiety level in the audience as well, especially the very loud explosions of the popping balloons. The recurring pattern of slowly building tension and sudden release soon became emotionally exhausting and produced a palpable level of stress in the listener. let it go beyond a certain point provides a concentrated and visceral metaphor of the tensions we encounter in everyday life – the intensity of this performance was a potent reminder of how emotionally damaging our busy lifestyles have become.

A bit of inspired programming concluded the concert with méditations poétiques sur “ma mort future” and this was in the style of the opening piece, performed with two harpsichords. As before, each player traded short phrases or notes, separated by extended silences. The ringing out and decay of the notes, the overtones and quiet meditative atmosphere were a stunningly effective contrast to the preceding piece. The widely separated tones from the harpsichords created a sort of protective framework around the silences – always keeping the listener aware that this was a time for rumination and not for reaction. After the stress of let it go beyond a certain point, this harpsichord piece provided a vivid alternative to an existence filled with constant tension. Time seemed to slow down, broadening the listener’s perspective past the immediate environment. méditations poétiques sur “ma mort future” is not about musical stimulation, but rather the opposite – creating a quiet mental space for contemplation and knowing what a gift that can be.