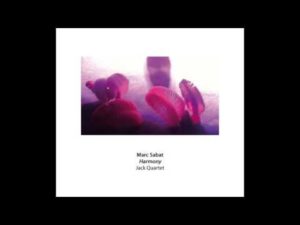 A long time fixture on the Toronto scene as a string performer, improviser, and composer, Marc Sabat now resides in Berlin. However, he has taken his experimental penchant for tuning systems with him, writing in extended just intonation with a fluency that rivals Harry Partch and Ben Johnston’s own explorations of pitch. On the CD Harmony, JACK Quartet plays two quartets and a duo with rapt attention to the detailed nuances of Sabat’s pitch language and a keen sense of its corresponding flowing rhythms.

Euler Lattice Spirals Scenery (2011) is a five movement work that name checks various elements and personages of the intonation studies milieu. The first movement, Preludio, is subtitled “Les Quintes Justes” and it indeed does deal with sustained pure fifths in evocative fashion. Two of the movements, numbers two and five respectively, are titled Pythagoras Drawing. Movements three and four are each dedicated to a different composer who has been influential on Sabat; they are titled Harmonium for Claude Vivier and Harmonium for Ben Johnston. Each successive movement sends us a little further into the dark forest of dissonant overtones that accumulate on top of “Les Quintes Justes.” Thus, the entire piece can be seen as gradually revealing the compass of Sabat’s pitch palette.

Claudius Ptolemy (2008) is a duo, played by JACK violinist Christopher Otto and cellist Kevin McFarland (note: Jay Campbell now plays with the group). Open string double stops as well as dissonant intervals, harmonics, and ambling melodies combine in this adagio essay to make a fresh-sounding conglomeration of familiar playing techniques. The aforementioned “ambling affect” is one that Sabat shares with a number of his Canadian colleagues, not least Linda Catlin Smith, whose volume in the Canadian Composer Series (#1) appeared as a review here earlier in 2017. The final work on the Sabat CD is named after another important music theorist: Jean-Philippe Rameau (2012). Here the simultaneities are particularly fetching, with double-stops from multiple quartet members overlapping into beautiful chords. In one of his treatises( from 1737), Rameau struggled to describe the consonant and dissonant properties of just intonation: Sabat’s Rameau lays it out for all to hear with abundant clarity.