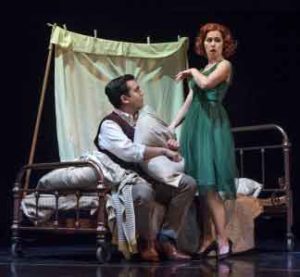 Our Buddhist friends like to remind us that the idea that we are separate is an illusion and not a fact but try telling that to anybody anywhere these days desperately trying to “connect” by every mobile device known to man. And if that doesn’t spell separation/alienation we might need a new word for this state of mind.
Leave it to French poet-artist-playwright-novelist-filmmaker Jean Cocteau (1889-1963 ) to set things right because the characters in his work are often desperately trying to connect as in his lyric tragedy with composer Francis Poulenc La Voix Humaine (1958 ) where the speaker is quite literally at the end of her tether. And let’s not forget the fact that Cocteau was always making war on established truths, and toying with what appearances mean or seem to mean. I walk around my block and nothing makes “sense” but that’s crazy because nothing really ever does.
Cocteau, at any rate, rarely tried to make “rational” sense in his work, and composer Philip Glass began his Cocteau trilogy with Orphee (1992) in which he took the script of Cocteau’s 1950 film of the same name and made it into an opera for singers and chamber orchestra, and though crystal clear in construction and sound it was almost as dreamlike as its source. Francesca Zambello’s white-on-white original production which I caught at The Brooklyn Academy Of Music was impressive, though much more so in its second half. Glass went further with La Belle et la Bete (1994) in which he used Cocteau’s 1946 film of the same name as both visual environment and text. The film’s sound was turned off which meant losing the actors’ voices as well as Georges Auric’s original incidental — partial — score which Glass replaced with a wall to wall one of his own for singers, with Glass and his Philip Glass Ensemble playing live. The result was a remarkable fusion of image, words, and music which I caught in Charles Otte’s US premiere at BAM, and in a slightly different but equally successful production by the PGE in 2013 at www.ybca.org, and in an overly busy and diffuse one by Oakland Opera Theater minus the film.
Glass went even further in his “dance/opera/spectacle” Les Enfants Terribles: Children of the Game (1996) which he and director-choreographer Susan Marshall derived from Cocteau’s eponymous 1929 novel and Jean-Pierre Melville’s 1950 film. The result was a highly theatrical work for singers, dancers, and three digital/grand pianos which foregrounded the reality which Elisabeth and her brother Paul construct as a substitute for their boring day to day life. Dance mirrors their animal natures, or as Glass put it in a program note for its original production which I wrote about for the defunct gay arts mag Provocateur — ” Here, time stands still. There is only music, and the movement of children through space”, which Opera Parallele re-imagined in surprising but perfectly apt ways They made the unreal real, and the real unreal and that’s catnip for opera.
The snow which fell onto the BAM stage from above was here projected on a scrim with the cast behind it facing the audience, and when the scrim went up, they stepped forward and the drama hurtled towards its dark inevitable end. Paul felled by the “marble-fisted.. marble-hearted blow ” of a snowball with a rock inside it thrown by his male friend Dargelos whom he’s in love with. `Paul convalesces at home with his sister where they seal themselves off from the world in their “Room” where they play the “Game ” which devours them and everyone who enters it. Entrapment. Betrayal. Incest. Poison. Death. And let’s not forget that Cocteau was coming off opium when he wrote Les Enfants so every production of it has to have the perfervid force of a dream, and this one had that in spades. Amy Seiwert’s dancers doubled baritone Hadleigh Adams’ Paul and soprano Rachel Schutz’s Lise disturbingly; director Brian Staufenbiehl’s fluidly calibrated movement surrounded / opposed tenor Andres Ramirez’s Narrator / Gerard who’s Paul and Lise’s friend mezzo Kindra Scharich enacted both Dargelos — Cocteau on Paul’s view of Dargelos  — “He had imagined himself in thrall to an accidental likeness between a schoolboy and a a girl ” — and the siblings’ friend Agathe to ambiguous and exacting effect. Ambiguous because everything here is ambiguous yet clear as your face in the glass, and exacting because though Cocteau may have been on opium when he wrote it his French is dispassionately clear, precise, a sealed off language in which even the biggest flights of fancy don’t quite take off because French has always been about where you should touch down, and that means rules understood and obeyed to a tee.
And this distance between the implied and the said is so very Cocteau, and so very Philip Glass which is here in his two against three rhythmic oppositions which hide and reveal his clear yet always moving harmonic structures, and it’s here when these three superb pianists build those structures one upon the other like floors in a building, utterly separate yet conjoined, indefinite space clearly defined, or as Debussy advised Satie — ” Music should stay where it is, not follow the play. It should be like a decor. A property tree doesn’t go into convulsion when an actor crosses the stage ” and it’s here where Staufenbiehl’s silent film isn’t an invention or an intervention but part of a barely glimpsed whole complete in its incompleteness. Or should we leave it to Cocteau who said ” style is a simple way of saying complicated things.” And to think that I saw the final dress of Verdi’s Rigoletto at www.sfopera.com just after Opera Parallele’s Glass Les Enfants. Two masters of our music theatre art operating at the very top of their respective games. We like to think we’re separate but we aren’t.