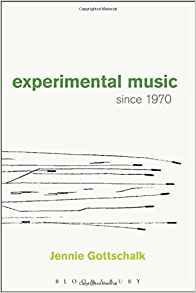 From the very beginning of Experimental Music Since 1970, author Jennie Gottschalk lets us know that her perspective is that of a “maker,” a composer. This is instructive as to the book’s approach and to its inclusion and, in some cases, exclusion, of experimental composers who have made an impact over the past five decades. These decisions are based on a particular composer’s vantage point rather than an attempt to construct an all-encompassing canon of “important” figures, which in the fragmented and various perspectives of the postmodern era no book could truly do without devolving into mere name-checking and cataloging. Happily, Gottschalk’s book is anything but a catalog — her portraits of various wings of experimental music are vivid and often detailed. It is the viewpoint of a fascinating “maker,” someone who embraces an array of imaginative approaches to musical experimentation.

Gottschalk suggests that one of the purposes of her volume is to serve as a continuation of Michael Nyman’s seminal Experimental Music: Cage and Beyond. Perhaps in response to the centrality of Cage in the earlier volume, she begins Experimental Music Since 1970 with a deconstruction of the composer’s 4’33”, pointing out the various pathways into experiment that the piece still affords today. Gottschalk identifies these central concerns as follows: indeterminacy, change, non-subjectivity, research, and experience. While it is quickly pointed out that not all experimental music engages all of these issues, they prove to be pivotal in the way that Gottschalk defines and describes experimentation.

With these initial precepts laid out, the book proceeds to further parse experimentation into particular spheres of activity, with each chapter tackling one or more of these. Thus we are spared a chronological overview and when concerns overlap in composers’ works, they may reappear throughout the volume. This does lead one to question certain choices of space allocation. For instances, even given all of his fertile creativity, why is Peter Ablinger so often referenced while microtonal composers Ezra Sims and Joe Maneri and hypercomplex composers Brian Ferneyhough and Claus-Steffen Mahnkopf are not mentioned even once? Apparently, the second modern school falls outside of Gottschalk’s purview. While one can fall back on her statement that she is a composer rather than a historian, it is somewhat disappointing that these significant types of experimentation seem “beyond the pale” (interestingly, there is similar neglect of American late modernism in Tim Rutherford-Johnson’s recent After the Fall: Music Since 1989). The presence of experimental jazz is also spotty, with a few references to artists such as Anthony Braxton and George Lewis but nothing about, for instance, Ornette Coleman, Alice Coltrane, and Sun Ra. Another challenge is some haphazard copy-editing, particularly in the book’s latter half.

These caveats aside, what is covered here is a splendor of imaginative music-making that will supply much food for thought. Gottschalk is particularly in her element when discussing the Wandelweiser collective, approaches to instrument-building, ad hoc electronics, improvisation, sound art, ecomusic in general and site-specific works in particular. The book’s inclusivity in terms of race, gender, and sexuality may, along with Rutherford-Johnson’s similarly sensitive treatment of these issues in Music Since 1989, help to slay a few stereotypes about composers. Gottschalk’s website, Sound Expanse, continues to build upon the achievements and aims of Experimental Music Since 1970, providing a valuable companion to the book and a “must bookmark” resource all by itself.