The Ground Beneath Her Feet at the wulf 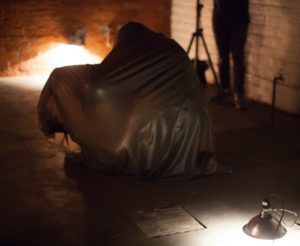 On October 11, 2017 downtown Los Angeles was the venue for a new collaborative performance by Rachel Yezbick, Carole Kim and Eric Heep. Coaxial Arts, the new home of the wulf experimental music concert series,  welcomed in a mid-week audience that arranged itself on the floor and along the brick walls in quiet expectation of an unconventional program.

The performance space was darkened as the program opened with Eric Heep’s Bubble playing through the speakers. The sounds were realized from digitally generated oscillations that were processed by computer using a bubble sort algorithm. The result was a series low buzzing sounds that gradually increased in volume and lowered in pitch. After a few moments a new starting buzz was heard, and the process repeated. The close acoustics of the Coaxial space amplified the details of density and texture as each new sequence of the piece proceeded. Sometimes two pitches very close in frequency were heard so that zero-beating occurred. At other times overlapping sequences were heard at widely spaced frequencies, giving rise to a variety of interactions as these unfurled downward. In one sequence, the initial buzzing was heard to have a sharp attack followed by decay and this resembled the striking of a large cathedral bell, minus its tone.

Eventually Bubble ran quietly down and at a given signal, Rachel Yezbick and Carole Kim stood up and approached a large gray latex bag in the center of the space. They entered  one at a time, until both were fully enveloped in its close folds. A wireless microphone was embedded with them and sent the internal sounds back to the computer for processing and into the sound system. All was quiet as the crouching shape lay motionless on the floor and this marked the beginning of The Ground Beneath Her Feet. The amorphous shape and the darkened space allowed the imagination to work, especially as the gray latex bag more or less completely obscured the human forms within. When lying or prone, the shape was seen as benign,  like a sleeping house cat. When creeping along the floor, the shape became something both strange and curious. The movement, the breathing sounds and the occasional suggestion of body and limbs convincingly conjured a presence that was alive. When the performers rose up and moved menacingly towards the audience,  seated just a few feet away with their backs against the wall, primal instincts took over and this change of posture suddenly felt threatening – as if a bear had wandered into Coaxial Arts. The entire performance was very engaging; that a large gray  bag containing two performers could evoke so many different perceptions was remarkable.

As expressed in the program notes, there were deeper intentions behind The Ground Beneath Her Feet:  “… the yearning for shape and the resulting assault against the surface when the desired form is untenable.” Taken from the title of a Salmon Rushdie book, this piece “reflects on the trauma of breaking through into new worlds, metamorphoses and aspiration.” As the work concluded there was much cheering and applause as the two performers emerged. This piece is physically strenuous and on a warm night Ms. Yezbick and Ms. Kim appeared as if they had just come from an extended workout in the gym. The Ground Beneath Her Feet vividly portrays the yearning and struggle for meaning while the striking movements and gestures of the performers completely captured the imagination of the audience.