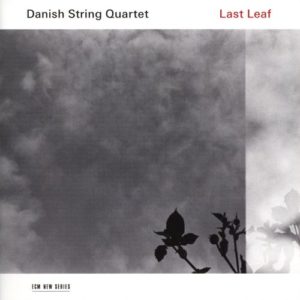 The Danish String Quartet is best known for their insightful interpretations of classical and contemporary repertoire. For instance, a 2016 CD for ECM Records presented early works by Ades, Norgard, and Abrahamsen to widespread acclaim. However, back in 2014, the quartet had a best seller on Da Capo, Wood Works, that consisted of arrangements by its members of Scandinavian folk tunes. In 2017 they released Last Leaf, another album of these arrangements and original compositions for ECM.

Last Leaf is in many ways even more successful than Wood Works. The arrangements by the Danish String Quartet’s various members are more sure-footed and varied in ensemble deployments. ECM’s sonics are, as usual, top notch, and the space chosen for the recording, a Danish museum, provides exemplary chamber acoustics. In addition, the group has combined classical and folk dances in adroit ways in several places. One of the most fetching and memorable of these is “Nadja’s Waltz” by cellist  Fredrik Schøyen Sjölin. Another is “Shine No More,” a reel-like tune by violinist Rune Tonsgaard Sørensen. “Polska from Dorotea,” an arrangement by the full quartet is a wonderful blend of contrapuntal writing and boisterous dance music. Sumptuous sonorities populate the ballad-like “Now Found is the Forest of Roses,” a poignant album closer.

Often, string quartets rely on their creativity to provide impetus for interpretation. It is gratifying hear a group that is as interested in the acts of creating arrangements and compositions as it is in providing stalwart renditions of preexisting music. Recommended.