Descent Into Madness in Pasadena 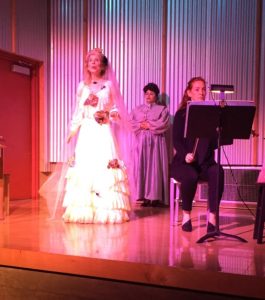 As part of their continuing new music series, the Boston Court Performing Arts Center in Pasadena presented Descent Into Madness, A Concert of Cautionary Music on February 9, 2018. The centerpiece of the evening was a performance of Miss Donnithorne’s Maggot by Peter Maxwell Davies, featuring Canadian soprano Stacey Fraser and Brightwork newmusic. Anthony Parnther, conductor, Jack Van Zandt, who studied with Peter Maxwell Davies, and Terry Smith, stage director for this production, were also on hand for a pre-concert discussion of this spellbinding work of mid-20th century British experimental opera.

The first half of the concert was given over to three contemporary works, including two by Southern California composers. Un-intermezzi, by Veronika Krausas, opened the proceedings with Aron Kallay as piano soloist. The titles of the individual movements are taken from the novel Un Lun Dun, by China Miéville.

The first intermezzo, “each dreams the other” began with a quiet repeating phrase, and conveyed a lightly mysterious feel. Darker chords followed, adding tension, and these alternated with the softer passages. The program notes state that this movement : “… is the composer’s version of the floating quality of Brahms’ Intermezzo in B minor, OP. 119, no.1.” This provided a gently evocative prelude to the next section, “a bowl for shadows.” Written in the “whimsical style of Erik Satie”, there is more mystery here, with a solitary line of notes that are nicely offset by counterpoint and stronger passages that occasionally build to a mild anxiety. Good contrast in the dynamics and a sensitive touch by Kallay sustained this delicate balance. The last movement, “a chorus of night-things”, opens with a wonderfully active splatter of notes – a summer shower of optimism. This movement bubbles cheerfully along like a running brook in a spring pasture. A solemnly dark passage intrudes from the lower registers and as the movement proceeds, alternating with the sunny confidence heard in the opening. These contrasting passages continue throughout, increasingly varied and building to the finish. Un-intermezzi is a pleasing homage by the composer to literary and musical influences, brought forward to a contemporary sensibility.

Organism, by Jason Barabba was next, scored for clarinet and flute. The music stands at center stage were arranged so that the two players faced each other. A high pitch from the flute floated upward to begin, and this was nearly matched by clarinet so that their dissonance resembled the whistling of a strong wind. Skittering passages followed, and these soon morphed into a series of intertwined and independent phrases woven together into a dazzling matrix of brightly organic sounds. The composer writes in the program notes: “One of the great features of both the clarinet and the flute are their ability for great subtlety, control and intricate dynamic shading. In this case the undulating opening section was designed to highlight the instruments’ dynamic control in their higher ranges.”

There were no common harmonies or pulse – each line was independently played with the rapid runs and trills nearly colliding but for the precise playing of flutist Sara Andon and clarinetist Brian Walsh. Even with all of the notes flying out into the audience, there was enough of an arc to the phrases so that the listener could naturally follow the flow. While every bit as complex, active and animated as a Jackson Pollock painting, Organism engages and dazzles, but never overwhelms.

Birds in Warped Time II, by Somei Satoh followed and for this Aron Kallay was joined by violinist Tereza Stanislav. Long trills in the piano opened this piece with a warmly idyllic feeling, like walking in a sunlit summer meadow. Sustained tones in the violin hovered above, offering a pleasing contrast. As the trills in the piano became louder and more insistent, the violin remained calm and serene. Some lovely harmonies were heard, especially when the registers of the two instruments overlapped. As the piece continued, the violin became more agitated, eventually breaking back to the elegant smoothness of the opening. Birds in Warped Time II is alluring music, expertly performed, and centered in an elemental tranquility.

After an intermission, the main event of the evening began, the performance of Miss Donnithorne’s Maggot, by Peter Maxwell Davies. Anyone who had to read Great Expectations by Charles Dickens in English class will know the plot: a young woman stood up on her wedding day becomes mentally unbalanced and refuses to leave the wedding hall or change out of her gown. This is based on a true story – there was a real Miss Donnithorne in Australia who in 1856 was engaged to marry a naval officer. When the groom never appeared on the appointed day, Miss Donnithorne subsequently withdrew from society and never left her deceased father’s house. The word ‘Maggot” in the title is from the older English usage, meaning obsession. The libretto for Davies opera was supplied by Randolph Stow – the two had previously collaborated on an opera about the madness of King George III using the same scoring of six instruments and a vocalist.

Brightwork newmusic took the stage, joined by special guest Ashley Walters on cello, with all led by conductor Parnther. A large array of percussion, the piano and the other musicians were wedged into the right half of the small stage, leaving just enough room for the acting. This never felt crowded or congested, however, and the interior nature of the drama was enhanced by the close confines. The staging, although spare and simple, was more than sufficient to carry the story forward. Soprano Stacey Fraser, singing the title role, appeared in a brightly arrayed white gown that appeared absolutely luminous in the artful stage lighting.

The opera proceeds continuously in a series of eight sections and opens with the jilted Miss Donnithorne sitting quietly at a desk, contemplating her circumstances. The percussion issues quick beats on the cymbal and blocks while the clarinet races through several rapid passages. The soprano enters, reading solemnly from what was the wedding invitation. More complex passages from the orchestra follow as the tension and emotional temperature rise in the voice. All of this was nothing less than a tour de force for Ms. Fraser who passionately invested every sort of painful emotion into the many words. That this was sung from memory is all the more impressive given the surreal nature of the music and its subject. As the opera proceeded, great surges of anger, sadness, despair and frustration were heard in their many variations, often expressed at the very limits of vocal technique. Ms. Fraser sang with a combination of confidence and daring perfectly suited to the occasion.

The action and arc of the opera is carried almost entirely by the voice and Brightwork newmusic supplied the fitful accompaniment to perfection. The various passages in the instruments were often disconnected and heard independently, and this required great precision in the playing. The percussion was especially challenging – there were all sorts of bells and whistles employed and at one point a toy balloon had to be popped on cue. All of the phrasing, various extended techniques and complexity from the instruments balanced beautifully with the voice and acting. Miss Donnithorne’s Maggot is a technically demanding work requiring great virtuosity from the participants, all skillfully realized in this performance.

The performers in this concert were: