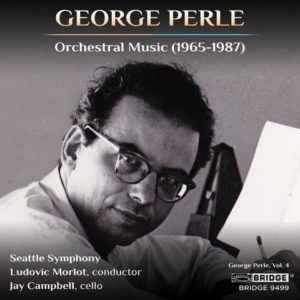 A recording of five previously unrecorded pieces, Orchestral Music 1965-1987 supplies excellent renditions of an underserved segment of composer George Perle’s output. Best known for his chamber music – he received a Pulitzer for his Wind Quintet No. 4 – Perle (1915-2009) also had significant orchestra commissions, including a residency with San Francisco Symphony and a 150th anniversary commission from the New York Philharmonic. Those who know his work as a music theorist will also be aware of his significant contribution to the field of 12-tone theory, as well as publications on his own idiosyncratic compositional method, “12-tone tonality.” The latter practice, with its use of carefully cultivated chromatic collections that obliquely refer to pitch centers, is fully on display in lithe and elegantly proportioned works such as Dance Fantasy (1986) and Sinfonietta 1 (1987). A bit more astringent in harmonic language are Six Bagatelles (1965), which seem indebted to Alban Berg, a touchstone figure for Perle, in their use of forceful angularity.

An intriguing entry on the disc is Short Symphony, 1980, which seems to be something of a response to Copland’s own, early and modernist in design, work by that name. The contrapuntal nature of its woodwind components recall some of Perle’s best chamber music. Elsewhere the orchestration is more muscular, with heraldic brass and rich passages for strings. Short Symphony display the composer’s consummate craftsmanship.

The standout piece on the disc is the Cello Concerto (1966), played with suppleness and impressive virtuosity by soloist Jay Campbell (also of JACK Quartet). The Seattle Symphony, under the estimable leadership of Ludovic Morlot, plays with both verve and precision. The finale is particularly varied in its demeanor, contrasting fluid cello solos with complex chords and supple wind duos, and forceful brass punctuations. It neatly resolves the well-known issue of balance in a cello concerto by bridging solos, small sections in counterpoint, and full orchestral interruptions to create a form where cello and ensemble eloquently coexist. One could readily see this piece having a substantial rebirth, particularly if Campbell continues to serve as its persuasive champion.