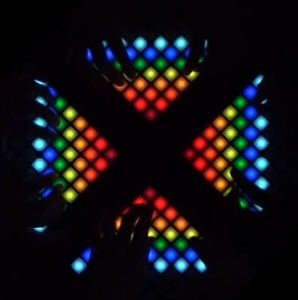 The much-anticipated premiere of Daniel Corral’s new multimedia piece, Polytope, was staged in the snug spaces of Automata in the Los Angeles Chinatown district on March 18, 2018. Presented by Microfest LA and performed by the composer along with Erin Barnes, Cory Beers and Andrew Lessman, every seat in Automata was occupied. A year in the making, and built on previous Corral solo works such as Diamond Pulses and Comma, Polytope extends the same techniques to an  ensemble format.

Polytope is described in the program notes as “a multimedia musical performance for microtonal MIDI quartet, fitting somewhere between a string quartet, Kraftwerk, James Turrell, and an Indonesian dhalang (master shadow puppeteer).” The sounds were activated by four square MIDI keypads with a total of 64 buttons each. The buttons were mapped into tonality diamonds such that the numerator of the harmonic ratio was along the X axis and the denominator along the Y axis. In this way, all possible combinations were available to each player. The keys were also lighted and color-coded for pitch and timbre. A camera mounted above the four keyboards allowed the colors and patterns to be projected onto the wall so that the audience could follow along. Various subsets of the keys were programmed to be lit at different times as the piece proceeded, and this acted as a sort of visual score. The shadow of the performers’ hands moving over the lighted keys was also visible, adding a welcome human element to all the technology.

Polytope began with a few spare, sustained tones with a cool, electronic feel. After a few moments notes became more varied and rapid, and a nicely active repeating melody emerged. The lighted keys began to rearrange themselves – sometimes with a row being added or subtracted, or alternately, the lighted keys would form  into a completely new pattern. As the four players worked at the changing key presentations, there was a kaleidoscopic element to both the sights and the sounds. After a few minutes of observation, the color and position of the keys projected on the wall could be decoded into anticipated sounds, further engaging the audience.

The repeating melodies increased in complexity, most often resulting in a pleasantly minimalist texture. The steady, pulsing groove in these sections was a real credit to the performers, who had to actuate each tone by pressing the small buttons in the correct sequence. The players were experienced pitched percussionists, but the crowded keypads and unfamiliar tactile feel was surely a challenge. There was no written score score, but the players seemed to be guided by the changing combinations of lighted keys that appeared before them.

Polytope extends for about an hour and projects different sensibilities at different times. An optimistic minimalist groove generally prevailed, but this was sometimes replaced by pure electronic sine tones that cast a cool remoteness. There were also stretches with a strong primal beat in the lower registers, and occasionally the piece evoked a sense of mystery and uncertainty. That the players were observed only by the shadows of their hands added just enough of the human element to make this a convincing performance. The decision to keep the players themselves mostly out of sight on the darkened stage was a brilliant stroke – watching four people pushing buttons would have been a distraction. The lighted keys on the screen also removed any expectation of pitch and timbre that might have attended a performance with acoustic instruments. The total darkness freed the audience to concentrate on the music and the visual relationship of colors and tones.   Polytope is an extraordinary piece of musical and visual art that features just intonation tuning in a vivid presentation that is both accessible and compelling.