HOCKET and Wiest/Lee at Monk Space in Los Angeles 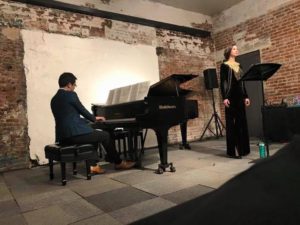 On March 20, 2018, Tuesdays @ Monk Space presented A Phenomenal Hum in Cracked Time. This was essentially two separate concerts: soprano Kirsten Ashley Wiest with pianist Siu Hei Lee were featured in the opening half, and the HOCKET duo in the second. A light rain didn’t dampen the turnout for this midweek performance and a good-sized crowd filled Monk Space for a full program that included a world premiere and works by several local composers.

The first half of the concert, titled DAWN, opened with Apples and Time Crack in October (2015), by Jack Van Zandt. This is a four movement work for soprano and piano, dedicated to Ms. Wiest who sang the premiere in September, 2017. The text was provided by the poet Jill Freeman. The opening movement began with rapid descending piano scale followed by a soaring vocal line that arced above an increasingly complex accompaniment. The piano playing was as precise as the voice was expressive, and a feeling of uncertainty mixed with mild anxiety established the sense of this piece right from the start. The active piano line was offset by a deliberately declarative voice, singing wistfully of the autumn. The final phrase was the perfect ending to this movement: “ Who knows what witch or wolf lies ’round the corner of November.”

“A Poem Sat Looking”, the second movement, was more subdued with a slower tempo and softer dynamics. This had a more reflective feeling and seemed to breathe a bit more freely with the relaxed pace. The balance between the soprano line and piano here was particularly impressive, given the close acoustics of Monk Space. Movement three, “The Nightingale”, opened with a series of rapid passages in the piano that convincingly evoked the agility of birds in flight. The soprano entrance was purposeful and dramatic, rising solemnly above the elaborate accompaniment and the contrast between the piano and voice in this movement was especially vivid. Lines such as “Outside our gate the nightingale soars on wing and song over trees here then gone…” skimmed gracefully over a rolling sea of sixteenth notes with rigorous discipline from both performers. At times a more automated feel prevailed, as imposed by the text that compared the perfection of a mechanical bird to nature. The final phrases were whispered – with nature prevailing – as the last notes slid into silence.

The concluding movement, “Helen’s Invocation,” is described in the program notes as ”…the piano version of the opening aria from Van Zandt and Freeman’s opera-in-progress, ‘A Thousand Ships,’ that explores different views of Helen of Troy’s role in the Trojan War.” This opens slowly with deep notes in the piano and a strongly dramatic vocal line, full of jumps in pitch and rapid rhythms. There is a mystical feeling here, like some pagan ritual; this aria is set just at the start of Helen’s voyage to Troy. The long, soaring vocal lines reach upward and make and fine contrast with the swirling piano passages in the lower registers. As this movement proceeds, the feeling gradually becomes more heroic, ending plaintively with the last lines of the text: “Stay this willing tragedy we have begun.”

Apples and Time Crack in October is an impressive collaboration of text and  music that in this concert combined piano and voice with extraordinary performance virtuosity.

A Sonatina (2016) by Bill Alves followed, based on a poem by Gertrude Stein “A Sonatina Followed by Another.” The composer writes that “Although the poem is filled with charming though fleeting images of her stay in southern France, I have extracted lullaby-like bits of the text that seem to refer to her life partner, Alice Toklas.” A Sonatina opens with a quiet repeating figure in the piano and a softly declarative entrance by the voice. After the storm and drama of the first piece, A Sonatina delivered a gracious and calming presence. The piano accompaniment has a pastoral and liquid feel, like a running spring brook. Ms. Wiest’s vocals were transparently pure of tone and virtuous in their simplicity, in keeping with the spirit of congeniality in the text: “Little singing charm can never do no harm, little baby sweet can always be a treat.” The piano pulled back just enough to give some room to the voice, and the gentle singing was perfectly matched to the lyrics. A Sonatina is a quietly introspective work that on this occasion was enhanced by a most agreeable and sensitive performance.

Fragments (2010) by Jeffrey Holmes was next, from a Latin text compiled by the composer from a variety of historical sources. “Horumque visum contegas”, the first of four movements, began with a loud, dissonant piano crash that immediately introduced a strong sense of anxiety and menace. The voice entered with sustained and sorrowful tones that suggested a lament, and the piano joined in underneath, building the tension. The trading off between piano phrases and solo voice was especially effective in the small sonic confines of Monk Space so that when the two were heard together the sense of terror was doubled. The tempest continued in the second movement, “Fera pessima”, following the grim lines of the text: “Most evil beast… you, whom the old fierce Dragon are called… “ About midway through a quiet vocal solo added a subtle anxiety to the emotional mix before building back to a more forceful feeling of distress.

The third movement, “Stella Maris”, began with a more subdued piano and a high vocal line that hinted at suspense and, ultimately, resignation. These emotions were artfully expressed and carefully balanced, especially at the lowest dynamic levels. A strong vocal line flashed above the roiling piano making a solid conclusion to this movement. “Qui Lux es et Dies” completed the piece with a long crescendo, the voice soaring and dominating with a potent sadness that bordered on despair. Soft piano notes followed, fading at the finish. Fragments is an unflinching look at the inner feelings of the disconsolate from a distant past, sharply drawn and artfully performed by Wiest and Lee.

Mysteries of the Macabre (1991) by György Ligeti closed out the first half of the concert and this began with unsuspectingly soft whispers, a few brief piano tones, and some short vocal notes. This was immediately followed by a short, sharp phrase in the voice and piano. Some vocalise was heard from Mr. Lee who simultaneously rapped on the outside of the piano. Ms. Wiest answered with a burst of rapid notes that jumped and soared with impressive range and power. The fireworks continued with piano crashes, trills and all manner of prodigious vocal gymnastics – precisely executed by the two musicians. As the piece progressed, soft vocal whispers were quickly followed by fortissimo blasts that included great leaps in pitch and dynamics, but these were always under full control. Mysteries of the Macabre is a minefield of extreme technical challenges –  successfully negotiated on this occasion by the two performers – and received with much cheering and applause at the conclusion.

Following the intermission, the second half of the concert opened with the world premiere of A Land Between (2018), by Bryan Curt Kostors. The stage was filled with two synthesizers, assorted speakers and foot pedals plus the usual tangle of wires and cables. Thomas Kotcheff arranged himself at the electronic console and the other half of HOCKET, Sarah Gibson, was at the piano. A Land Between began with some quiet electronic burbling that increased in volume and was followed by a loud piano crash. Low dramatic notes from the piano were accompanied by a pulsing, minimalist groove from the speakers and a high electronic counter melody that was very effective. At times the strings inside the piano were quietly plucked, providing a good dynamic contrast. The combination of the synthesizers and piano produced some lovely sounds and the steady pulse kept the audience engaged. At the finish there was a more assertive, swirling feel that filled the space with a great wash of sound before trailing off. A Land Between is a complex technical and artistic effort, tightly integrated, and performed with impressive precision.

Phenomenal Hum (2017) by Tonia Ko was next, performed by HOCKET. This opened with a low piano string that was struck from the keyboard while also stopped by a hand on the inside. The result was a sort of percussive knock, like hearing a ghost in the basement. A complex, four-handed melody followed, mostly in the middle registers and at moderate dynamic levels. The knocking sounds returned, building tension so that there was a mysterious, and even slightly ominous feeling overall. The melody returned, as if answering, with greater complexity, volume level and drama. The four handed passages now returned to dominance as HOCKET artfully weaved the many strands together. The piano line then pulled back slightly, just as the knocking returned, louder now and with greater insistence. The piano answered with a series of powerful runs and crashes, but the knocking persisted, ultimately prevailing at the end. Phenomenal Hum is an intriguing combination of a single extended technique and four-handed keyboard virtuosity – an entertaining contest between complexity and simplicity with the outcome in doubt right up to the finish.

Byrd/Cage (2016) by Derek Tywoniuk followed, and for this the composer joined HOCKET on stage as percussionist. Byrd/Cage opened with a single piano tone that hung in the air and was soon answered by a mallet striking one of the lower strings inside the piano. A thin, high pitch from a bowed vibraphone plate filled the space with a fascinating sound, while more solitary piano notes and the striking of strings were heard as the piece proceeded. Occasional low trills in the vibraphone added to the mystical atmosphere. Generally soft dynamics and a moderately slow pace throughout allowed the audience to focus. The sparse texture, extended techniques and a limited palette of pitches combined perfectly in Byrd/Cage to evoke a strong sense of mystery.

The west coast premiere of Together in Perfect Harmony (2014), by Joseph Michaels concluded the concert program, a four-hand piano piece performed by HOCKET. A thick, repeating phrase opened with a steady pulse – the harmonies sometimes static and sometimes with the chords rising in pitch. With twenty fingers on the keys and the occasional forearm tone clusters, Together in Perfect Harmony has an appealingly dense texture that falls outside the listener’s usual expectation for a piano. Soon, a rough, busy melody emerged that alternated with a few quiet bars, making for a stretch of nice contrast. A slower and quieter section followed, thickening the sound once again, and then after a bit the notes gradually spaced out to produce an almost empty feel. Loud, crashing tone clusters followed, filling the stage with a joyful roar and a strong pulsing groove. A grand pause marked the run to the finish as a shower of bright chords flew outward into the cheering crowd. Together in Perfect Harmony expands the sonic possibilities of the piano through the masterful use of four hands on the keyboard, creating an unexpectedly spirited and pleasing experience.