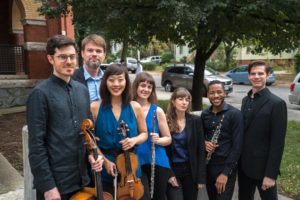 Heads up, New Music fanboys and fangirls. There’s a good looking concert at Roulette on Thursday night called French/American Music in Dialogue that brings together the Boston-based new music ensemble ECCE with its Paris-based counterpart Court Circuit, which is currently on tour with dates in Buffalo, Pittsburgh and Worcester.

Founded by composer John Aylward, Clark University Professor, 2017-18 Guggenheim Foundation Fellow and winner of the 2018 Walter Hindrichsen Award from the American Academy of Arts and Letters, ECCE’s mission is to deliver its energetic performances of new music in multiple forms and collaborations with creative artists and thinkers across disciplines. Activities encompass an annual concert season culminating in the international Etchings summer music festival.

Philippe Hurel and conductor Pierre-André Valade created the ensemble Court-Circuit in 1991. “Created by a composer for composers”, Court-circuit from the outset was a place of experimentation, an art project promoting intense risk-taking in a spirit of total freedom. A strong commitment to contemporary music is the real cement of the ensemble. Court-circuit is led by Jean Deroyer.