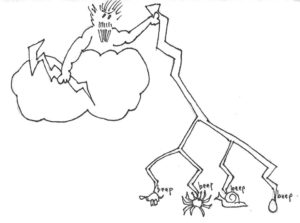 The 14th annual Dog Star Orchestra concert series kicked off on Saturday, June 2, 2018 at Automata in Chinatown. A new music tradition, the Dog Star series this year will present nine concerts over two weeks at various venues around Los Angeles. This occasion was a performance by the Southland Ensemble of Byzantine Rites, a new work by Laura Steenberge. A standing room-only crowd wedged itself into the cozy spaces of Automata to experience a remarkable exploration of medieval chant, contemporary music and a wide variety of engaging visual manifestations.

Byzantine Rites is the result of research by the composer into seventeen settings of the medieval Byzantine chant Cherubic Hymn. Byzantine Rites is, in fact, Byzantine in its very structure: there are five separate movements – having five different embedded sections within – all performed serially without pause. Different combinations of instruments were used including woodwinds, strings, percussion and horns fashioned from PVC pipe. A number of physical objects were employed as well, lights, wide rolls of aluminum foil, several large bags of plastic straws and a suspended microphone lowered into a large cardboard tube.

As Ms. Steenberge wrote in the program notes: “The Byzantine aesthetic seeks never-ending, constantly unfolding symbolism, layering image, sound, light, space, smell, movement and text. Each action has both a pragmatic and a symbolic function.” Accordingly, the space at Automata was fully exploited for this aesthetic incorporating instruments, voices and various physical objects, At the rear of the stage was a high balcony, accessed by stairs behind a wall, and this allowed the performers to occupy different places and levels for different actions.

Byzantine Rites begins with a simple chant melody on a bass flute that instantly establishes a strong sense of the mystical. The humming of notes into the instrument while it was played and the solemn ringing of chimes added an exotic feel. As this was proceeding, plastic straws were dropped from the raised balcony down to the stage, impinging on a microphone. The amplified patter provided an intriguing percussive element to the texture as well as a dramatic visual component to the scene. The rain of straws increased, and soon great clumps were sent falling downward from above. The overall pattern for Byzantine Rites was immediately established to include musical, physical and visual elements throughout.

Another section of the piece featured more flute melody and the hoisting of a length of PVC pipe up to the balcony using a long rope. The pipe was cut into roughly one foot pieces and sent back down to the stage where they were played like an old rams horn trumpet. These sounds were looped and then mixed together with a live bassoon and saxophone. The long, sustained tones created some interesting harmonic patterns and included an effective dissonance that supplied a more contemporary feel.

In a later section, strings and voices refocused to the original medieval sensibility with drones and a warm harmony, while large rolls aluminum foil were unfurled from the balcony down the back wall to the stage. Two electric lights suspended from long cords were then lowered along the foil. In the darkened spaces these looked very much like candles shining out in some dim cathedral interior. The solemn music, the staging on different levels, the physical and the visual components of Byzantine Rites all contributed to the impression that a sort of liturgy was occurring.

Towards the finish a large cardboard tube was hung from the balcony and a microphone lowered within to create various tweets and sounds from feedback. This was accompanied by the strings, continuing with the quietly calm melody, while the woodwinds played long, slow tones that hinted at anxiety as they fell in and out of dissonance. It was as if the old, comfortable world of the Byzantine medieval was giving way to an apprehensive present. The music ceased and the lights along the foil dimmed to complete darkness at the end. Byzantine Rites is an extraordinary combination of the old, the new, the musical and the visual, all artfully combined to create an experience that engages the senses, the emotions and the memory.