At the 2018 Ojai Music Festival 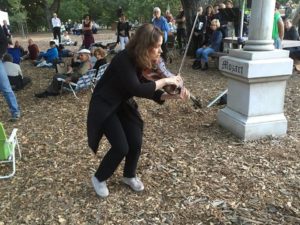 June 7, the opening day of the 2018 Ojai Music Festival, featured the usual welcome variety of lectures, interviews and pop-up concerts as well as performances of music by two notable mid-20th century Italian experimentalists. The first day of the festival was picture perfect and a large crowd milled about the outdoor venues, meeting and greeting. There was little evidence of the disastrous Thomas Fire of five months prior, and spirits were as sunny as the weather.

At 6:00 PM, Luciano Berio’s challenging Sequenza IXa for Clarinet, played by Vincente Alberola, was heard from the Libbey Park gazebo, to good effect. The amplification and the open spaces were nicely matched and Alberola’s precise articulations and dynamic nuances were clearly heard throughout the scattered crowd. This sensitive and virtuosic performance was received with enthusiastic applause.

At 7:30 PM somewhat larger crowd gathered for La lontanaza nostalgica utopica futura by Luigi Nono featuring Festival Music Director Patricia Kopatchinskaja on violin and Los Angeles-based composer Scott Worthington at the controls of the electronics. The program notes proclaimed: “A dynamic duet between solo violin and spatial amplified sound transforms the Libbey Park into an all-encompassing and immersive aural environment.” A seemingly tall order, but the array of large speakers positioned around the space and the formidable sound system panel looked promising. La lontanaza nostalgica utopica futura consists of 8 recorded tracks and a solo violin, and these were seamlessly integrated into the speaker system so that good hearing in the open spaces of the park was not an issue.

The piece began with the speakers filling the space with the soft sounds of what seemed to be string players warming up or tuning. A few odd words were heard, then some thumps and squeaks before a series of rapidly complex runs in the violin established an air of suspense and uncertainty. The recorded sounds often came from single speakers in opposite corners of the space, and this added spatial perception to the overall experience. The crisp precision of the live violin phrases was helpfully distinct from the recording. There is little form or structure evident in this work – at times the sounds were fast and intense while at other times slower and softly atmospheric. The violinist moved randomly about to a series of music stands located throughout the area, and this served to increase the sense of mystery. The crowd followed Ms Kopatchinskaja in a great mass, cell cameras in hand, but this did not disturb the performer whose furtive movements added to the drama of the moment. 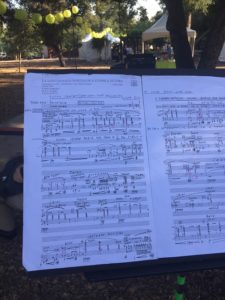 This is complex, nuanced music, with stretches of quiet tension mixed with sharply phrased passages brimming with anxiety. I first heard La lontanaza performed indoors, in a converted warehouse and the atmosphere there gave the piece a sense of tension that was distinctly urban. Outdoors in Libbey Park the music lost none of its power, but rather emerged as more rustic and primal. In Ojai, even the ambient noise from the streets and some quiet talking among the crowd fit right in with the recordings, and actually added to the performance. As the afternoon light faded, Ms Kopatchinskaja became a spirit-like presence moving among the darkened trees. A long, looped final violin note signaled the conclusion of the piece and the crowd slowly dissipated, as if released from a magical spell.