Unlike those big-media favorites lists that appear in mid-December to grease the skids of the Great Shopping Season, my year-end reckonings dawdle until the last moment and don’t claim to define the best of anything. But with audio streaming, social media and other factors pushing the contemporary music landscape into an increasingly variegated but fragmented state, some measure of thoughtful inventorying seems both prudent and practical. In that spirit, here’s a biased and opinionated survey of albums and other media released in 2018 that made an impact on me.

New music theater was a recurring theme during the year. Tops in prominence was the premiere of Kurtág’s Fin de Partie at La Scala, but we’re still waiting for that to be recorded. Another notable 2018 event was the US premiere of Saariajo’s chamber opera Only the Sound Remains (its European video release was one of my picks in 2017). Over in the UK, a string of high-profile operatic premieres—including Muhly’s Marnie, Dean’s Hamlet and Adès’s The Exterminating Angel—reached an apex with the captivating Lessons in Love and Violence by George Benjamin. Its libretto, which Martin Crimp adapted from Marlowe’s play Edward II, divides the palace intrigue into seven scenes, and shoehorned into a tight 90 minute span, the result invites comparisons with Wozzeck (though Berg, when faced with the insane King’s insistence that “I can hear drumming”, would surely have used the orchestra to depict his deluded reality, whereas Benjamin depicts things as they really are). Lessons is similar in style to Hamlet and Angel, but Benjamin’s textures are thinner and clearer, and thus seem more varied and communicative by comparison.

You can view streaming video of the Royal Opera’s premiere production at medici.tv (subscription required) or purchase it on Blu-ray. Highlights include the powerful second scene where three peasants describe their impoverished agony to the callous Queen Isabel (played by Barbara Hannigan). One peasant asks why both the poor and the rich sleep three-to-a-bed (the latter alluding to Edward’s same-sex consort Gaveston). Another fine moment is the brief threnody for Edward that features cimbalom and Iranian tombak drums (one of the opera’s few nods to beat-driven vernacular music). Benjamin’s use of cimbalom and two harps is effective throughout: they seldom play simultaneously, but working in tandem they create a soundscape rich in struck/plucked string sonorities.

Speaking of British royalty, there’s Thea Musgrave’s Mary Queen of Scots, wherein Scotland’s most famous female composer weighs in on its most famous female politician. The long-unavailable 1978 recording of this most admired of Musgrave operas has finally reappeared in celebration of her 90th birthday (Amazon, Spotify, YouTube). While Lessons in Love and Violence belongs to the Tippett tradition of English-language opera, Mary is squarely within the more conservative Britten lineage, but its style is still contemporary and unsentimental. My favorite moment comes in the ballroom scene where one courtier starts up a bawdy reel to disrupt Mary’s dance with a rival, the musics clashing like the men’s ambitions. Won’t someone revive this work onstage in lieu of yet another production of Donizetti’s Maria Stuarda?

In November 2018, while various world leaders were in France commemorating the end of WW1 (or in Trump’s case, hiding indoors from the rain), Parisian audiences took in a concert staging of Nicholas Lens’s 2014 opera Shell Shock. The libretto, a collection of anguished reflections from war veterans and widows, ostensibly set during the Great War, was penned by Nick Cave, thus explaining how a traditional opera might open with a lyric like “Some asshole…some asshole…some asshole shouts at me in words I do not properly understand”. The eclecticism of Lens’s score is reminiscent of Henze, though specific passages conjure up other composers. The prelude, for instance, is practically a clone of the Kyrie from Ligeti’s Requiem, while the Canto of the Nurse resembles the serial music heard throughout Eisler’s German Symphony.

That Shell Shock has been successful enough to warrant revival is due largely to its weaving of cultivated and vernacular styles into a fabric that is postmodern but not hackneyed. ENO and the Met should take note of how much better this works for “accessible highbrow” than Marnie, whose application of bel canto opera accoutrements in service of fancified Broadway-style music comes off as pretentious and overproduced.

Video of Shell Shock can be streamed here for a limited time.

Fixed media music has often been marginalized within the broader classical music world because it doesn’t align with traditional performer-centric institutions and publicity machines. That its prominence is increasing today is testament to the shakeups engendered by inexpensive digital instruments and new distribution channels. One of the few regrets I have over this development is the amount of high-quality studio work that I’ve had to set aside to shrink this part of the list to a manageable size:

More tribute to the elders

Next come three albums that seem to be on everyone’s list, and understandably so.

Back to the Old World

The quantity of thought-provoking work that came along in 2018 makes this list quite a bit longer than last year’s, and testifies to the ongoing resilience and sophistication of Western art music even as some voices prophesize its imminent demise or assimilation. But perhaps a bit of perspective should be offered by two final albums whose scope lies well outside that usually associated with Western-influenced cultivated arts:

Music of Northern Laos and Music of Southern Laos
Cherishingly recorded between 2006 and 2013, and released this year on Bandcamp by the irrepressible Laurent Jeanneau (AKA Kink Gong), these two albums showcase the remarkable heterophony and sound world of traditional Laotian folk music. On display are the spicy timbres of bamboo tube instruments, the vertical mouth organ called a khene (basically the same instrument as the Japanese shō and the Chinese sheng) and singing in a variety of throaty and nasal styles. Per Jeanneau, “most recordings available in the Western world focus on the dominant culture in Laos. I focus on marginalized ethnic minorities”. It’s a monument to the tenacity of threatened cultures clinging to life amid the pressures of global artistic commodification. 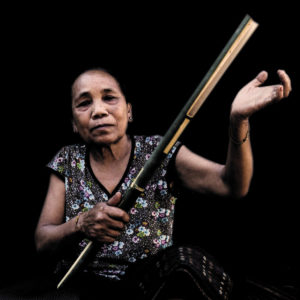 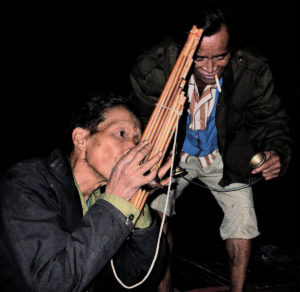