Music of Ben Johnston in Pasadena 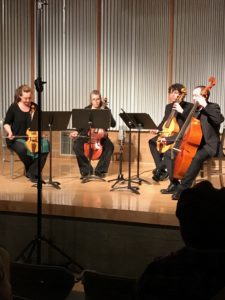 On Friday, March 15, 2019 the Lyris Quartet and the Kepler Viol Quartet joined forces at the Boston Court Performing Arts Center for an evening of the music of Ben Johnston. The concert was produced by Microfest and featured two of Johnston’s well known string quartets, as well as two rarely performed works. The Kepler Viol Quartet was on hand for the pre-concert talk to demonstrate the bass, tenor and treble viola da gambas used in Fugue for Viols, one of the concert pieces. The intricacies of viol construction, tuning, vibrato, intonation and bowing were explained to a surprisingly knowledgeable and engaged audience. The viola da gamba in the history of tuning was discussed and details of how Johnston re-purposed the fretting for just intonation were also covered. Ben Johnston, who studied with Darius Milhaud, Harry Partch and John Cage, was elected into the American Academy of Arts and Letters last year. At 93 years of age, Johnston may be one of our most influential but least familiar composers. His birthday falls on March 15, making this concert the perfect occasion to celebrate his music.

The first piece on the concert program was String Quartet #4, “Amazing Grace” (1973), performed by the Lyris Quartet. This is probably Johnston’s best known work and consists of a series of seven variations on the familiar hymn, all in different forms of just intonation. The opening section is the cantus firmus, in magnificent full harmony, with a rich and textured feel. Other variations featured expressive counterpoint, wistful introspection, and at times a certain stridency. The hymn tune appears just often enough to keep the audience fully connected. The ensemble playing by the Lyris Quartet was strong throughout, and also included striking solos from the violin and viola. The final variations combined complex passages with a pleasingly dense texture that was abetted by the unconventional harmony. Amazing Grace is perhaps the most over-exposed hymn of our time yet String Quartet #4 brings a vibrant new freshness to this old standard.

Duo for Two Violins (1978) was next, performed by Alyssa Park and Shalini Vijayan of the Lyris Quartet. John Schneider’s helpful program notes describe this piece as fulfilling “…one of the composer’s hidden agendas: to explore what would have happened to the traditional forms and language of Western music if the pure intervals of the Renaissance had not been abandoned.” Accordingly, Duo for Two Violins consists three movements – a fugue, an aria and toccata – lifted directly from Baroque sensibility. “Fuga”, the first movement, was anchored in the familiar formal structure, but the harmonies gave this a refreshingly modern feel. The second movement, “Aria” opened with a soft scratching sound in one violin and a quietly mournful melody underneath. The interplay between parts and the harmony produced by this combination was very alluring and the delicate playing only added to the overall charm. “Toccata” finished out the piece, and the busy opening of this movement was a nice contrast, providing an appealing bit of complexity and bounce in an uptempo finale. Duo for Two Violins is an elegant re-imagining of historical forms and tuning practice that gives new insight into the music history that might have been.

The Kepler Viol Quartet took the stage for Fugue for Viols (1991) and began the lengthy tuning protocol for the bass, treble and two tenor viola da gambas that make up the ensemble. According to the program notes “…Fugue for Viols has only ever been performed at a few early music concerts in the Midwest in the years that followed its composition…” Originally written for George Hunter, an early music colleague of Johnston’s at the University of Illinois at Urbana-Champagne, the structure of the piece is squarely in the traditional fugal format. The subject begins in the bass and proceeds to the treble and tenors in the usual way. The audience could hear immediately that the viola da gamba quartet is a smaller and more intimate musical experience. The dark coloring in the bass added a sense of the ancient while the just intonation harmonies were warm and woody to the ear. The timbre of the viols and the unusual chords were at the same time an old curiosity and a new experience. The playing was clean, and the Kepler Quartet brought new life to the old instruments in a most satisfactory way. Fugue for Viols is an intriguing update to the rarely heard viola da gamba quartet, at once familiar and innovative.

The final work on the program was String Quartet #9 (1988), whose four movements further explored Johnson’s interest in recreating classical forms set free from equal temperament. “Strong, calm, slow”, the opening movement, is just that, with sturdy chords rising upward with a solid and settled optimism. The tutti playing was rich and full, adding to the lovely harmony. The second movement, “Fast, elated”, featured rapid phrases in the violins and viola with an appealing counter melody running through the cello. The strong, purposeful feel was supplied by a fine tutti ensemble. Always in motion, there were moments of stridency, especially with the pizzicato phrases in the cello. “Slow, expressive”, the third movement, was full of warm four-part harmony with a deep bass line adding to the sense of calm and comfort. A handsome violin solo was heard, accompanied by moving lines in the second violin and viola along with pizzicato phrasing in the cello. The playing here was precise and elegantly expressive. “Vigorous and defiant”. the final movement, opened with a strong, declarative statement that mixed in a bit of tension. Fast moving phrases in the upper strings crested to a defiant statement, then began again with a strong pulse and rapid tutti ensemble. The playing was exquisitely tight, with the quartet on a solid footing despite the fast tempo and unconventional pitches scattered through the passages. All of this built up to a big finish that was received with extended applause from an appreciative audience. String Quartet #9 is a masterful construction based on old forms while using new musical materials, brilliantly performed by the Lyris Quartet.