A Day at the Ojai Music Festival 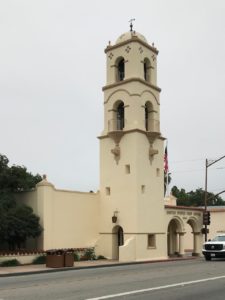 The 2019 Ojai Music Festival began on June 6 and packed in a wide variety of styles and vintages of new music over four days and three nights. Everything from Haydn and Stravinsky to Catherine Lamb was on the program, along with films, pre-concert talks, picnics and special events that filled up every day from dawn to midnight. Barbara Hannigan served as the 2019 Music Director and this festival marked the final year for long-time Artistic Director Thomas W. Morris.

On Friday, June 7, the early morning concert featured the JACK Quartet performing pieces by Clara Iannottta and Tyshawn Sorey. The SANE Center was the venue, located just across the street from Libbey Park, and while cozy it was agreeably indoors and out of the cool morning mist. The first piece was the US premiere of dead wasps in the jam-jar (iii), by Clara Iannottta, inspired by imagery from a poem by Dorothy Molloy. For this piece the JACK Quartet was augmented by an electronic sound track that played through speakers placed on both sides of the small stage. The composer writes: “While working, I pictured a kind of deep-sea environment, the lowest layer in the ocean, where constant pressure and perpetual movement seem to shape the stillness of time.”

This piece opened with slow, whisper-like scuffing sounds from lightly bowed strings. There was a quiet, almost pastoral feeling to this, and the instruments were heavily subdued with a variety of mutes. This restful atmosphere was broken by louder sounds from the electronics that carried a sense of distant menace. The soft string sounds soon returned, but were again interrupted by a low roaring from the speakers, as if some beast was at large nearby. The roaring had an exotic but primeval sensibility about it, complimenting the calm environment established by the strings. dead wasps in the jam-jar (iii) is hushed and nuanced music, carefully played in this performance by the JACK Quartet to create a unique sound world where the natural environment and its organic processes are thoughtfully realized.

The West Coast premiere of Everything Changes, Nothing Changes, by Tyshawn Sorey followed, a piece commissioned by the JACK Quartet. Christopher Hailey writes in the program notes that “The piece is slow-moving and delicate, never rising above piano. The quartet plays sustained sonorities as a unit, individual voices perceived not as solo lines but as components of gently shifting harmonic textures.” Accordingly, the piece starts out with quietly sustained tones that sound both mysterious and slightly dangerous. Everything Changes, Nothing Changes carries in it a more urban sensibility, as distinct from the open, feral feel of the previous Iannottta piece. The playing here was sensitive and nuanced, with just the right dynamic range within muted boundaries. There was never anything flashy or fast, and the settled consistency throughout was impressive. In Everything Changes, Nothing Changes the exquisite playing of the JACK Quartet and Sorey’s smoothly crafted harmonic textures combined perfectly to keep the audience fully engaged. 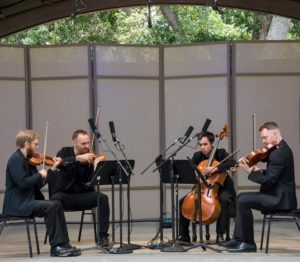 The mid-day concert in the Libbey Bowl was divided into two sessions and featured several works by John Zorn. The first session started with The Alchemist, performed by the JACK Quartet. This piece began with a sharp opening of rapid phrases, generous pizzicato and a rattling dissonance that filled the air with a frenzy of unexpected and constantly changing gestures. This is a complex piece that turns on a dime – at times warm and sustaining and then suddenly strident and dense. The playing by the JACK Quartet was superbly precise, fully meeting the challenge of this seriously difficult music. The Libbey Bowl sound system came through brilliantly, as usual, making every subtle detail clearly audible in the open spaces. As the piece proceeded the energy only seemed to increase, with bursts of pizzicato exploding like popcorn among the roiling waves of sound. A high, thin violin tone, sustained above the slower passages in the lower strings became a kind of signature moment, building tension. The Alchemist is an impressive and complex brew marked by continuous textural variations, rapid rhythms and strong dynamics. 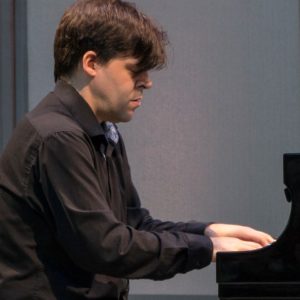 A series of Zorn piano trios followed: Hexentarot, Ghosts and The Aristos. Pianist Stephen Gosling joined violinist Christopher Otto and cellist Jay Campbell of the JACK Quartet on the Libbey Bowl stage. The three piano trios were played through continuously and featured the same quick phrasing, rapid changes and showers of pizzicato passages heard in The Alchemist. With the presence of the piano and just two other strings, the texture was thinner and acquired a bit more clarity, especially in the slower sections. The piano was effective in adding a bit of tension, and it was at just such a point in the performance that a number of crows could be heard calling from the tree tops, contributing their own sense of menace to the music. Towards the end of the last trio, the piano became quietly introspective before turning active again, and then finally mystical. An expressive violin solo and some gentle strumming of the piano strings completed this part of the concert. Zorn piano trios can be explosively volcanic or as quiet as a cat – but always challenging to the listener as well as the performers. 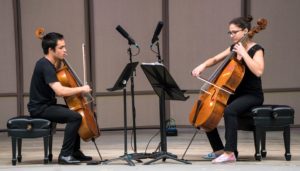 After a 30 minute intermission, the second session of the concert began with cellists Jay Campbell and Alexa Ciciretti performing Zorn’s Ouroboros. This opened with a frenzy of rapid phrases that bordered on panic, but the amazing skill of the two performers kept the piece firmly on the rails and moving forward, often at breakneck speed. All of the familiar gestures of Zorn were present, now shared between two players. There were fast passages in unison, haunting melodies in one cello with active and disjointed playing in the other, blizzards of pizzicato phrases and, rarely, sustained harmony. The coordination between the cellists attained an almost psychic completeness as they blazed fearlessly through this intricate piece. Ouroboros is surely one of the most technically difficult cello duos in contemporary music and the masterful effort by Campbell and Ciciretti was an impressive tour de force, rewarded by sustained and enthusiastic applause.

Two more Zorn string quartets followed, beginning with The Unseen. The JACK Quartet returned to the stage and the piece began with soft buzzing and trills, a high, sustained tone in the violin and a series of slow moving phrases. All of this had a questioning and tentative feel as furtive phrases emerged in the lower strings. High, quiet trills in the violins added a sense of anxiety, as if some lurking menace was hidden nearby. The music became more characteristically active with a series of fast scales in unison, but overall this piece was unusually subdued compared to the previous Zorn pieces. A high, thin violin tone floating over tremolos in the lower strings punctuated the finish.

Necronomicon was the final piece in the concert program and this consisted of some five movements played continuously. This had more of the Zorn intensity and swiftly hopped between rapid and complex phrasing, independent and interweaving lines, copious amounts of pizzicato and waves of frenetic passages. There were stretches of strong unison notes that added some drama and a sense of danger. Sustained tones in lush harmony were occasionally heard – but not for long! Necronomicon continued to cycle through the Zorn vocabulary with different variations and densities, creating a kaleidoscopic tour of his remarkable artistic vision. Given the level of complexity and the technical demands of his music, John Zorn and the JACK Quartet are surely made for each other.

The late afternoon concert was Part II of The Mathematics of Resonant Bodies, by John Luther Adams. This percussion piece was performed in the Libbey Park gazebo by long-time Adams collaborator Steven Schick. The complete work was broken into three parts, and stretched over three days of the festival. Three of the inner movements of the piece were heard on this day: “Shimmer”, “Rumble” and “Burst.”

The Mathematics of Resonant Bodies is an exploration of the inner nature of percussion sounds as disclosed by combining live performance with processed electronic recordings. The composer writes “I began this work by composing a new cycle of quartets. Steve Schick came to Alaska and recorded these pieces one part at a time. I assembled the recordings and then began filtering them… The result was a series of ‘auras’ derived from the inner resonance of the instruments themselves. As the final step, I composed a series of solo parts to be performed within these sonic fields.” 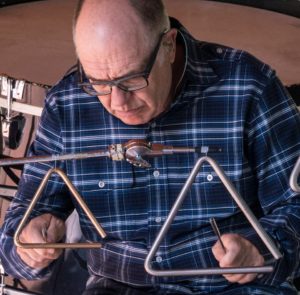 Three percussion stations were assembled in the gazebo: a rack of triangles, a large bass drum and a number of different snare drums. “Shimmer”, the first section, not surprisingly, was performed on the triangles. Three different sets were played rapidly in pairs and the sounds mixed with the prerecorded ‘aura’ track in the speakers to produce in a brightly ringing shimmer. The brilliance of the combined sounds was stunning, and far beyond what the triangles alone could produce. The timbral character changed according to the speed of the playing – faster playing generally produced more pronounced interactions with the electronic track. When different pairs of triangles were rung, the new pitches and their subsequent interactions created new and scintillating shimmers of sound. The playing by Mr. Schick was animated, yet precisely controlled, as might be expected from a performer with such a long association with this piece.

“Rumble” followed and this was performed on the large bass drum. Great rolls of thunder swept outward from the gazebo as Schick powerfully pounded the drum head with large mallets. The sound was as much felt as heard, and engulfed the audience. The interactions with the recorded track were somewhat subdued, taking the form of a relatively soft washes at a very low frequency. This varied somewhat in character depending on the rate of the drumming and the force applied with the mallets. That a warm mix of sounds could result from such powerful percussion was an unexpected revelation.

The final section heard was “Burst”, performed on the snare drums. Schick was kept busy, moving among the drums generating various rolls and patterns. The contrast and rhythms of the drumming was impressive, but the interactions with the recorded track were more hit and miss, perhaps owing to the open air acoustics. The best results seemed to occur when several different drums were struck loudly and quickly. The Mathematics of Resonant Bodies is a revealing study of the inner voices hidden in ordinary percussion instruments, ably performed on this occasion by Steven Schick, an acknowledged master of the art.

The 2019 Ojai Festival under Music Director Barbara Hannigan was, by all accounts, a great success. The variety and high artistic level of the music presented, combined with the masterful skill of the performers, extended the legacy of the Ojai Festival as an indispensable Southern California cultural event.