Noon to Midnight at Disney Hall 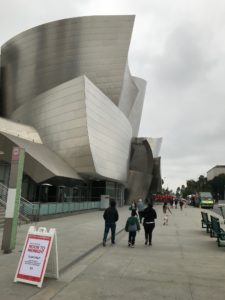 On Saturday, June 1, 2019 the annual Noon to Midnight new music festival returned to Disney Hall, complete with non-stop concerts, food trucks and a beer garden. Some 28 concerts were scheduled over the twelve hour event, appearing on the main concert hall stage and several other smaller spaces throughout the venue. As John Adams wrote in the program introduction: “There’s hardly a single square foot that is not the site of some musical event, whether it be in the hallways, the anterooms, the rooftop garden or the main hall.” A large, casual crowd gathered in a congenial atmosphere that resembled more an open house or sporting event than a serious concert. The wide variety of musical experiences and the presence of cheerful crowds surging through Disney Hall makes this an important local event in the cultural calendar.

The music for this event was an eclectic mixture of outsiders and local groups and included the Calder Quartet, FLUXUS, Eighth Blackbird, ICE, red fish blue fish, wild Up, wasteLAnd, HOCKET, Lyris Quartet, LA Phil New Music Group, Southland Ensemble and Accordant Commons, among others. There was something scheduled every 15 minutes or so, and it was impossible to hear everything. I managed to get to four of the concerts scheduled on the program. Here is what I heard:

The first work in the main concert hall was the west coast premiere of crowd out, by David Lang. The audience and performers completely filled the seating for this unusual piece, conducted by FLUXUS. There were four music stands, but no musicians in sight, and the stage was crowded with members of local university music departments, community choruses and church choirs. These were also scattered through the audience so that the performers covered the entire hall. The program notes helpfully stated that “… David Lang had the inspiration for crowd out during a soccer match in London, where he heard the thousands of untrained voices swell, crest and recede – at times in unison and at times in total contrast with one another.”

Two groups of performers began by standing and following the directions of two sub-conductors on stage as they silently moved their arms into different positions and gestures. There were soon recitations by each of the two groups – but not in unison – and the feeling was very much like being in a stadium crowd. The dynamics for each group was then directed by the conductors so that the swelling and cresting of voices added to the experience. Eventually the recitation morphed into a unison chant: “I am always alone.” The large number of performers and the fact that they were in the audience space combined with the Disney Hall acoustics to fully immerse the listeners in sound. The formal distinction between the performers and the audience was completely erased. As late-comers entered the hall – no doubt expecting to hear music – the look on their faces was at first quizzical, but invariably followed by delight.

As the piece progressed, a third conductor arrived on stage and began to direct the crowd in unison singing. The melody was simple, yet powerfully moving as the big hall filled with hundreds of voices. As the verses repeated, the text emerged as a series of statements and regrets about the sense of loneliness that is possible when in a crowd. The singing eventually gave way to a strong unison chant that further emphasized this sentiment. The sense of being inside this piece as part of the performance, was surprisingly inspirational and a bit like being in a church service. crowd out is a stimulating and ultimately touching work that breaks down the ceremonial barriers between performer and listener in a unique and effective way.

The Grand Avenue Staircase was the outdoor venue for Brass Fanfares, a series of selected works featuring the members of the Los Angeles Philharmonic brass section. Four horns, four trombones, no less than six trumpets and a tuba were arranged on the terrace facing the intersection of First St. and Grand Avenue.  Marc Lowenstein conducted this series of short fanfares, most of which were commissioned in 1969 for the 50th anniversary of the LA Phil and revived for this, their 100th season.   The strong sounds of the ensemble, protected somewhat by the sheltering walls of Disney Hall, carried well out into the street,. The intonation of the players was solid, even in the cool air. In one piece, there were various and intriguingly active trumpet parts over a solid bass foundation. In another, the horns and trombones combined in rich harmonies that recalled a medieval theme. In the final piece, sustained tones combined to create a brooding, mysterious feel that was, by turns, dramatic, agitated and filled with anxious tension. Even at a distance of 50 years – and perhaps now considered somewhat conventional – the early fanfares were well received and just the thing for attracting passersby. 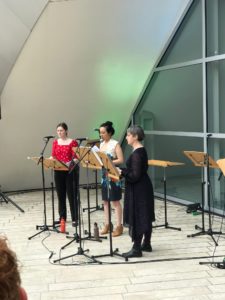 Accordant Commons, a local new music vocal group, also performed on the Grand Avenue Staircase. Four pieces were sung, all composed by women, and the amplification worked well in an ambient space filled with helicopter sounds and traffic noise. First up was In Fading Colors of Autumn Hills, by Chen-Hui Jen. According to the program notes, this piece “…creates synthesized tone color consisting of individual, overlapping phrases in well-tempered microtones, just intervals, timbral harmonics, combination tones and beating tones,” Sopranos Stephanie Aston and Tany Ling, along with mezzo Argenta Walther were up to the technical challenges and the piece started quietly with long, sustained tones and a soft sighing. Subdued, remote and nuanced, this music was not adversely disrupted by the many outside sounds and soon the pace picked up with whistling, whispers and some impressive leaps in pitches. The soft, sustained tones returned with more whispering underneath before fading at the finish.

“H.”, by Fernanda Aoki Navarro followed, and this began with Ms. Aston singing with soaring tones, vivid dynamics and bits of melody that seemed vaguely familiar. Soprano Kirsten Ashley Wiest joined in, singing into a short tube known as a spring drum that produced a kind of muffled squeal. Ms. Aston continued with a bright line of syncopated notes, echoed in a muffled reply by Ms. Wiest. The result was a lively and lyrical interchange of the two disparate voices. At just this moment, a siren from the street wailed in passing, and this fit into the piece perfectly. Both singers replied with similarly high pitches, perhaps by way of improvisation or perhaps because of serendipitous placement in the score. In any case “H.” was received with great delight by the listening audience.

Two more vocal pieces were heard. Palus by Kari Besharse was sung by a trio beginning with sustained, close pitches in unison that had a touch of melancholy. This was followed by a more active series of independent vocal lines, yielding some intriguing tones and harmonies. The singing here was demanding but precisely delivered. The final piece was Apple, by Leah Reid and was inspired by the Gertrude Stein poem. Although this piece also called for advanced vocal techniques, the beginning was a loud series of giggles by the four singers that established a more entertaining premise. There was clicking, clapping, vocalise and a few intelligible words having to do with cooking. The syncopated and rhythmic melodies were choreographed by the quartet as the ‘recipe’ continued, and the audience was soon caught up in the fun. The music was sophisticated and the singing was tasty, making Apple a very enjoyable experience.

wild Up made their appearance on the main concert stage which began with Rot Blau, a performance art piece by Jessie Marino. Two figures – one dressed in red and one in blue – were seen sitting at a table, projected on the screen above the stage. The pair went through a series of choreographed hand motions that were simple at first, but gradually became more intricate and complex. The stage then went dark for a few moments, and two lights – red and blue – swam into view on the screen. These also went through some choreography and ended in a kind of shell game, hiding and emerging from under two cups. The live duo reappeared on the screen and more hand gestures followed. The unexpected whimsy of this combined with the excellent choreography of Rot Blau resulted in enthusiastic applause.

The world premiere of A Thing Made Whole (II), by Andrew Greenwald followed. A subset of wildUp filed onto the stage with Richard Valitutto taking his place at the piano. The other three members of Gnarwhallaby – making this a reunion of sorts – were also part of the ensemble with additional string players and a percussionist completing the group. In conceiving this piece, the composer wrote in the program notes that he “…asked whether a type of mathematical design could render music which pushes at the boundaries of our cognition, yet concurrently retains a sense of order.” In this piece the boundary most often tested was instrument dynamics at the threshold of hearing. Soft, sustained tones in the upper strings along with light bowing in the cello produced a quiet wash of sound at the opening that seemed to evaporate as it wafted upwards into the ample space of the main concert hall. Air was heard flowing through the trombone and piano strings were lightly plucked, adding to the ghostly feel. When a melody appeared, it was very subtle and nuanced, and consisted of single notes in the strings and piano. There was no amplification and the hushed tones invited close concentration; the full audience in the hall did its best to remain quiet.

Soft arpeggios in the vibraphone and deep notes in the bass clarinet produced a more mysterious feeling as the piece glided to its finish A Thing Made Whole (II) focuses the attention of the listener in a way that reveals entirely new timbral possibilities at the very edge of perception. The result is highly atmospheric music that was effectively realized through skilled performance.

The final piece in the wildUp set was Star Luz Black, another world premiere. Written in tribute to a late friend by Julianna Barwick, Star Luz Black was co-commissioned by the Los Angeles Philharmonic and is scored for eleven string players with the composer at the piano. This began with strong, repeating notes in the lower strings that immediately established a profound and solemn feeling. The upper strings took up the theme and soon added sustained tones over the cellos and bass. The sorrowful simplicity and beauty of the resulting harmonies was a bit reminiscent of the first movement in Symphony No. 3 by Henryk Górecki.

At length, the piano entered with a series of three-note phrases that added a touch of the tragic to the poignant sounds in the strings. This evolved into a piano solo with processed vocals by Ms. Barwick that seemed to hover in the air. The strings quietly re-entered underneath, building a sense of drama before finally fading as the piano finished the piece with the three-note theme. Star Luz Black is a lovely and heart-felt memorial as well as a sensitive and moving work of music.

Disney Hall and the Los Angeles Philharmonic deserve great credit for hosting the Noon to Midnight event each year. It provides an outstanding opportunity for the public to sample a wide variety of contemporary new music and also gives our local talent the chance to perform on a big stage. The great crowds of young people who attend this event each year connect with the LA Phil in a unique and accessible way, ultimately benefiting the institution and the cultural life of the city.