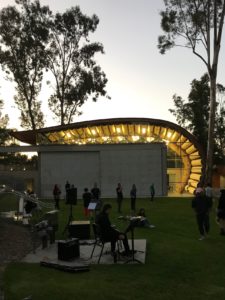 The 15th annual Dog Star Orchestra series of concerts concluded with Civil Twilight, held at the CalArts Wild Beast and environs, presenting four pieces of experimental music. Three of the pieces were heard outdoors in the mild evening air, on this the second day of summer. Two of the pieces were keyed to local astronomical events – the setting of the sun and the positions of the stars occurring at exactly 8:00 PM on June 22, 2019. The entire concert was devoted to music that was both understated and sophisticated, inviting the audience to listen closely and carefully.

The first piece was to knowe the sprying of the dawenyng and the ende of the evening, the whiche ben called the two crepuscles (2019), by Ryan Seward. This had to start precisely at 8:10 PM on the outside lawn in order to coincide exactly with the point at which the sun was fully below the horizon. It was timed to last until 8:39 PM, the end of civil twilight – the point when light from the sun is considered to be no longer sufficient for ordinary outdoor activities. The players were scattered singly about the lawn and the audience joined them, having been encouraged to move about to experience the sounds in different locations.

A soft soprano voice was heard, coming from high above on a balcony. The woodwind players began a series of quiet bird calls and small bells were rung. A wide variety of sounds were made by the other players; a horn call, some stones rattling across a patio, a purring from some speakers and some softly spoken speech. By changing positions, listeners would come into hearing range of some players and out of earshot of others, so that the mix constantly changed according to location. By staying on the move, the effect was very much like a walk in the woods at sunset, accompanied by a convincing series of quiet forest murmurs. There was, of course, some ambient traffic sounds, but the ‘virtual forest’ seemed to displace this noise from the hearing. The piece gradually decreased in volume as the sun dipped further below the horizon, finally fading into silence at end of civil twilight. With to knowe the sprying of the dawenyng… Ryan Seward has succeeded using reticence and subtlety to create a tranquil organic soundscape that inspires the imagination despite the more irritating outdoor noises of our urban environment.

More quiet music was heard in the second piece on the program, For 5+ Musicians (2016), by Christine Burke. This was heard indoors and the musicians were arrayed in shallow arc at the front of the Wild Beast. The excellent acoustics of the space and lack of outside ambient noise allowed every detail to be clearly heard. For 5+ Musicians began with the striking of highly pitched cymbals followed by a soft electronic tone from the speakers. A low, sustained flute note floated out into the audience as whistling and breaths of air were heard in accompaniment. All was subdued and hushed, with nothing loud or dramatic. At length, a muted trumpet was heard playing a long tone, and as other woodwinds joined in the dynamics increased, but only slightly. Moments of total silence were often observed, adding to the general sense of tranquility. As the piece proceeded, the woodwinds sounded together in slight dissonance, but this was the only trace of tension. By the finish, air moving through the horns and woodwinds was all that was to be heard. For 5+ Musicians is a peacefully reserved work that exists on the edge of aural perception, inviting the listener to experience new and rewarding sonic territory.

pájaros cargando memorias (2018), by Sergio Cote Barco followed, with the musicians assembled on a high balcony outside the Wild Beast, above the grassy lawn. The audience filed outside in the dark to the terraced sitting area cut into the hillside, directly below the balcony. The piece began as a small cymbal sounded along with quiet musical tones and a soft soprano voice that called out into the night. The subdued mix of sounds created a mystical feel, and the texture was never more than sparse. Often only one or two instruments were heard at a time, and all the musical sounds were almost secretively hushed. The playing at this low level was very disciplined, yet sensitive. At times, the ambient outside noises crowded in and obscured the piece, but this only served to focus the listening and created a sort of adversarial context for the music. The soprano voices, with their sustained and ethereal tones carried well and provided a rallying point for the listening audience. pájaros cargando memorias ultimately prevailed against the banality of the ambient street sounds, drifting peacefully out into the darkness like a cloud of pleasant memories.

The final piece of the evening was Ophiuchus (2019), by Marta Tiesenga, and this was also performed on the outside lawn. Ophiuchus is the thirteenth sign of the Zodiac, representing the constellation of a ‘serpent bearer’. As part of the composing process for this piece, the exact disposition of the stars for the date and time of this performance were worked out, and various angles, vectors and relationships transposed into pitches and tones for the notated score. A group of seven acoustic instruments were situated in a corner of one of the buildings and a computer station with speakers placed a dozen yards away, across the lawn. A low, electronic humming was heard at the opening, followed by the solitary ringing of bells from a walkway high above the grass. As the instruments joined in, their sounds interacted with the electronics to create a series of intriguing and mystical sonic patterns. The crowd caught on to this, and soon arranged itself on the grass between the two sound sources to receive the full effect. The low, sustained notes of two double basses were most effective when they changed pitch slightly to initiate a new set of interactions with the speakers. More players appeared, holding small bells and walking about the space, softly ringing out a series of solitary notes. At times they seemed to congregate in one place and this added a bit of density to their sounds. As they dispersed their ringing diminished until all the sounds faded away. A long and reverent silence followed as the starry night seemed to prolong the musical spell. Ophiuchus is an imaginative work with an inventive composing process that captures the timeless human fascination with the stars.