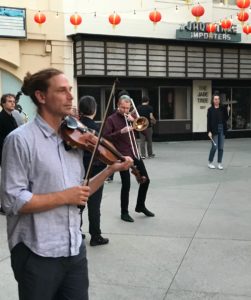 On June 14, 2019 the Southland Ensemble presented Land Images, an evening of experimental music at Automata Arts in Chinatown. The concert was part of the 15th annual Dog Star Orchestra series, presenting a dozen different new music concerts at various locations around Los Angeles through June 22. A full house packed the cozy spaces of Automata anticipating works by Christian Wolff as well as pieces by three contemporary composers.

The first piece on the program was Groundspace or Large Groundspace, by Christian Wolff and was performed outside Automata in Chung King Court. About a dozen performers carrying various instruments gathered in the center of the court and began by playing quiet, sustained tones. This had a remote and distant feel to it, with nothing fast or rhythmic to disrupt the gentle harmonies. The players then began to slowly disperse into the square, so that their changing positions altered the spatial perspective of the listeners. The tones were consistently sustained and changed every minute or so by signal from a saxophone arpeggio. Some of the players slowly circled the outside perimeter of the square, creating variations in the intensity of the sonic field and adding an element of suspense. The audience was also encouraged to move about among the musicians so that position became an important and unique element of the experience. Chung King Court has buildings rising on three sides and opens onto busy Hill Street so that ambient traffic noise at times dominated the mix. Music and street noise often alternated, and this was effective in shifting the context of the piece and focusing the listening. The musicians eventually regrouped and filed inside Automata, and the concentration of their instrument sounds reasserted a fully musical perspective at the finish.

Once inside the players began performing Sticks, also by Christian Wolff, and for this each player took up a handful of twigs and small branches. They set about breaking these and dropping the pieces noisily to the floor. The small space was soon filled with the crackling sound of breaking sticks. There was no effort to coordinate or organize this process, but the sounds could sometimes be perceived as rhythmic. The ‘timbre’ of the breaking sticks had a vaguely purposeful feel, and so invited a more industrial analogy. Towards the end of the piece, the performers began a warm and sustained humming that added a ceremonial flavor to the proceedings. Sticks has an organic and primal sensibility, as if we are witness to the every-day activities of some long-lost tribe.

The next piece was (here) 7 : land images, one by Chicago-based composer Jack Langdon. A field recording was heard on the speakers and consisted of sounds heard in a car driving on a routine errand in Pasadena. This had a definite homespun character – a child talking, car engine and traffic sounds. The performers in Automata began playing various found objects and a quiet scraping was heard as well as soft scuffling and rattling. The familiar domesticity of an automobile ride made a telling contrast with the sounds produced by the players and was perhaps a comment on the inherent alienation we experience in our everyday lives. Another field recording began, this featuring the more organic sound of birds in a field. A flute began playing short, bird-like passages and this was soon taken up by the violin. The sense of pastoral calm was broken only by a soft clanking, as if the mechanical world was never far away. A third recording was based on the peaceful sounds of a dog sleeping as four performers stood in a tight circle and were seen to breath in unison with the animal. A final field recording was based on a walk with two dogs in a local tunnel and for this, subdued, thin tones were heard from the strings and flute. This added a sense of tension and a touch of loneliness, as might be imagined on such a walk. (here) 7 : land images, one combines subtle, indeed almost subliminal, recordings of common reality with a counterpoint of performed sounds to create a poignant contrast and commentary on the familiar.

For the Beauty of the Earth, by Kathryn Koopman followed. A projection of what looked to be an aerial photo of a river and stream system was seen on the wall as soft pizzicato was heard from the double bass. A siren-like sound came from the saxophone, sustained and anguished, as if indicating a crisis. A new photo appeared on the wall, indistinct, but perhaps organic as more string players entered adding tones that gave a renewed sense of urgency. One performer began reciting soft words as the sounds from the instruments increased to a feeling of agony. In a short while, the harmonies in the strings and saxophone turned melancholy. The addition of vocals and the rolling of a glass bottle on the floor created an overall feeling that was convincingly stressful. The music and images were well matched, creating a convincing sense of impending catastrophe in nature.

A new photo appeared, a looming black cloud, while strong, scratchy sounds from the violin and a deep rumbling in the bass furthered the sense of dread. This evolved into full blown screams of distress, filled with chaos and a sharp tension. The playing here was visceral and full of intensity. A scary viola solo at the finish put an exclamation point on this extraordinary piece. For the Beauty of the Earth is carefully crafted music and a stern warning about an earth threatened by pending climatic disaster.

Next was Stones, by Christian Wolff. The performers sat on the floor along the edge of the walls and in the corners of Automata with handfuls of small stones and rocks. These were indiscriminately dropped, rolled or struck together and these sounds soon filled the small performance space. This was reminiscent of Rock Piece by Pauline Oliveros, but in that work the sound of rocks being struck randomly together is more percussive, giving the perception of rhythms rising out of randomness. As with Sticks, this piece seemed to convey a larger human purpose, suggesting the presence of some innate cultural component. The variety of rock sounds contained a sense of industry.  Stones provides a strong reminder that human activity has a recognizable pattern of sounds, even if the objects involved are simply small stones being moved about on the floor.

The final piece on the program was Dryads, by Heather Lockie. The Southland Ensemble musicians were placed in small groups located at the corners of the space and in the high loft. A soft chord from the saxophone, strings and flute was heard from above, establishing a quiet, ethereal feel. Voices picked up the pitches, adding a tender human dimension, while strings and the double bass answered from below. At times, a bit of tension could be detected in the lush harmonies, but the sustained chords coming from the scattered ensemble seemed always to return to the calm and reflective composure of the opening. The playing was sensitive and emotional, surrounding the audience in a warm transcendental bath. Towards the finish, the voices went a cappella and this only enhanced the serenity of the moment. Dryads is a remarkably beautiful work, with such a delicate spirituality in its realization that you never want it to end.