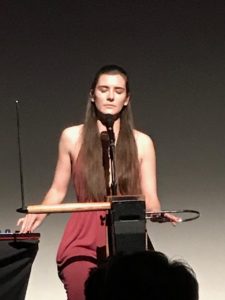 The first set of the evening was by Sarah Belle Reid. According to the program notes, she is a “Canadian performer-composer, specializing in trumpet and electronics, modular synthesis, and alternate forms of graphical notation for composition and improvisation.” Ms. Reid performed works from her newly released album Underneath and Sonder. This began with a remarkable hybrid trumpet that featured two bells – one of which was muted – while both were connected to the same valving and a single mouthpiece. The formidably convoluted plumbing for this instrument was ingeniously constructed so that the performer could switch sounds between the two bells. Ms. Reid played the horns into a microphone and the acoustic sound was processed by a laptop and amplified by the surround sound system. The opening notes were elegantly sustained and alternated intriguingly between muted and open trumpet tones. The electronic processing provided a complimentary mystical dimension, especially when the muted bell was used. A wide variety of sounds were produced as the bells were moved back and forth in front of the microphone.

After a time, the familiar trumpet tones were replaced by breathy sounds of air moving through the horn. A series of hisses, snorts and whooshing sounds emerged that were well beyond the traditional sounds of a brass instrument. There was primal growling and something like gunshots that, with the high powered sound system, drove sonic levels in the hall to the threshold of discomfort. The amplified snapping of the valves and a thumping sound derived from an unusual intonation soon filled the space with a thoroughly percussive feel and a pleasingly solid groove. There were also stretches of vivid harmony and brilliant processing so that It seemed as if several players were performing at once. The unexpectedly diverse collection of sounds, the electronic processing and her innovative instrument designs have enabled Ms. Reid to significantly extend the expressive potential of the humble trumpet. A long round of enthusiastic applause followed the finish of a superb performance.

Carolina Eyck followed, equipped with a theremin, microphone and processing electronics all connected to the surround sound speakers. After a short explanation on the workings of the theremin, Ms. Eyck began with a comforting melody – perhaps an old hymn tune – to which she added her voice and some agreeable looping. At one point she was singing in harmony with herself and the theremin tones. Her control over the sounds coming from the theremin was remarkable, depending as it does on the position of her hands in space. There were no corny 1950s sci-fi effects, but rather a sumptuously smooth sound with rock solid pitch control. Ms. Eyck was in complete command, playing the theremin, dialing up the appropriate electronic processing and singing with a beautiful soprano voice. There was a timeless feel to her music that seemed to flow from a long folk tradition – the haunting phrases and melancholy notes were reminiscent of old Celtic tunes. Her latest album is aptly titled Elegies for Theremin and Voice.

One piece described a walk along the beach and featured the sounds of wind, surf and sea birds in addition to a sunny optimism in the melody. Perhaps the most affecting piece was an elegy for a young harpist friend who had passed away. The mix of layered voice and theremin soared with an ethereal transcendence, artfully creating a powerful memorial. All of Ms. Eyck’s pieces were well received and contained an appealing combination of voice, theremin and electronic processing that worked seamlessly together. Her set was given a rousing standing ovation. 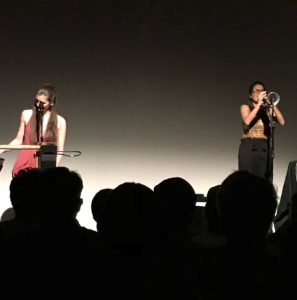 Ms. Reid returned to the stage for an improvised encore that featured both performers. A different trumpet appeared, this one fitted with valve displacement sensors connected wirelessly to the laptop – another impressive technical achievement. The warm tones of the theremin and Ms. Eyck’s enchanting voice were joined by the many and varied percussive sounds coming from the modified trumpet. These worked surprisingly well together: the expressive complexity of the trumpet contrasted nicely with the graceful sounds of the theremin and voice. A more extended duo would have been been a plus, but the creative possibilities were clearly evident.

The two performers generously made themselves available afterwards for a meet and greet. There was something for everyone in this concert: the dramatic explorations of experimental trumpets and the soulful harmonies of the theremin and voice. The large crowd in attendance drifted out into the warm Los Angeles night in a state of high contentment.