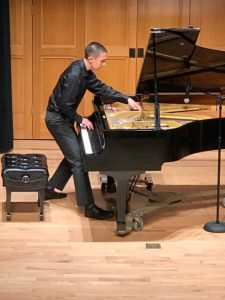 On Sunday, November 3, 2019 the Pasadena Conservatory of Music presented a concert of piano music by Pulitzer Prize-winning composer George Crumb. The occasion marked the observance Crumb’s 90th birthday on October 24. No fewer than three soloists were on hand in the Barrett Recital Hall to perform piano works by Crumb from the early 1970s and 1980. The concert was dedicated to the memory the composer’s daughter, actress and singer Ann Crumb, who had died just a few days before.

A Little Suite for Christmas, A.D. 1979 opened the program, performed by Susan Svrček of the Conservatory faculty. This seven movement work is based on the Nativity frescoes of the Arena Chapel in Padua, Italy as created by Giotto in 1305. The opening movement, “The Visitation” begins with a series of soft, mysterious chords that gain in power as they are repeated. The sharp phrasing and wide variation in the dynamics create a sense of the unknown as well as a certain foreboding. “Berceuse for the Infant Jesu”, the second movement, follows with a calming and gentle feel that is built around a lovely fragment of melody. The quiet tenderness is undercut in the last few phrases, however, by a faint feeling of uncertainty.

Extended techniques are a prominent feature of Crumb’s music and in the third movement, “The Shepherds’ Noël”, there is the plucking and light strumming of the piano strings. This establishes a haunting backdrop to a simple melody from the keyboard that evokes a shepherd’s flute. The stopping of several strings with hand pressure while the notes are played produces a sharp percussive effect, and this is used to advantage in “Adoration of the Magi”, movement four. All of this was negotiated with a smooth elegance by Ms. Svrček. The rapid rhythms and crashing chords of movement 5, “Nativity Dance”, provided a stirring contrast to the slower movements. Lightly plucked strings and strumming accompanied the soft and settled “Canticle of the Holy Night”, movement 6, which contained a fleeting quote from the familiar Coventry Carol to summon an appealing element of folk simplicity.

“Carol of the Bells” closed the piece with deep rumbles rising from the lower registers, alternating with bright flashing phrases that rang out like a carillon in the town square. Towards the finish, a touch of unease crept in that reinforced the thoughtful combination of reverence and wonderment that fills this entire piece. The liturgical season of Advent in our 21st century has been completely overwhelmed by commercialism and forced merriment. In A Little Suite for Christmas, A.D. 1979, George Crumb has restored the proper sense of awe that should inform our reflections on the events of the Nativity at this time of the year.

Makrokosmos, Volume I was next, a piece written in 1971/72. Nic Gerpe was the soloist for this twelve movement work in three parts, for amplified piano. Each of the movements was inspired by a sign of the zodiac. Part One opened with “Primeval Sounds (Genesis I) Cancer,” and this began with a series of soft, dark chords in the bottom register of the piano. Extended techniques were again prominent, including some strong strumming that added to the feeling of distant menace. Loud, stopped notes were repeated and rang out like angry hammering. A great swell of tremolo notes arose from the left hand, evoking a powerful sense of primordial dread. The second movement, “Proteus Pisces”, was comprised of short, rapid phrases that were distinctly playful and a welcome contrast to the previous atmospherics. Played from the keyboard and technically demanding, these were nevertheless heard with a clear precision. “Pastorale Taurus” followed, with more gloom coming from the lower registers of the keyboard. A loud yelling of ‘Christe!’ punctuated the quiet and signaled the opening of the final movement of Part 1, “Crucifixus Capricorn”. A few quiet notes from the keyboard followed and then a cascade of strumming, plucking and vocal cries of agony and despair that was as unsettling as any Passion.

Gerpe was in complete control at all times and moved confidently about the piano. He played the piece without a score – access to the interior of the piano made the use of the music rack impractical – and so this piece was played entirely from memory. When asked about this later Gerpe replied that the physicality of the playing constituted a sort of choreography, and this was much easier to remember than a series of notes and rhythms.

Parts 2 and 3 of Makrokosmos followed in similar fashion. This is music made of sound sequences and not of melody or harmony.  The expressive range of the piano seemed to expand as the piece continued, with each movement featuring new combinations of extended techniques. There was a whistled quotation from a hymn tune as well as new and darker sounds from the lower reaches of the piano strings. Listening to this piece, one soon forgets the initial novelty of the extended techniques and simply admires the new musical syntax. Gerpe negotiated all of this cleanly and with complete assurance.

Makrokosmos Volume II followed after the intermission and was performed by soloist Kathryn Eames. This was the second of four volumes comprising the Makrokosmos series and was also informed by the zodiacal signs. As with Volume I, this piece had twelve movements divided into three different parts. Makrokosmos Volume II contained, if anything, a wider variety of sounds than the previous pieces on the concert program. There were many vivid emotions that came across in the twelve movements: brightly optimistic, dramatic, darkly mysterious, playful, mystical and menacing.

Extended techniques were more extensively employed in this piece and included the placing a sheet of paper on the strings to create a kind of buzzing distortion. A glass tumbler on the strings produced a series of otherworldly sounds, aided by vocals from the soloist. A wire brush applied to the strings produced an intimate, whispering sound. There was the usual rapping, strumming and plucking in this piece as well, and the wider use of these extended techniques seemed to fit more seamlessly into the musical architecture. Ms. Eames presided with impressive finesse over the various phrasings and effects, while also playing the piece entirely from memory.

These piano pieces by George Crumb are a milestone in 20th century musical development and his masterful application of extended techniques will stand as a benchmark of the art. Los Angeles is fortunate to have three piano soloists capable of performing this music at such an accomplished level.