Closing out the twenty-tens: Schell’s picks for 2019

Though our decade technically has another year to go, the marketing appeal of “Hits of the XXs” type formulations tends to overwhelm such semantic niceties. So as we leave the 2010s behind, there’s more than a little Web-based generalization to be found regarding their musical character and trajectory. I’ll try to keep things in perspective as I review some of the highlights of 2019 that embody the breadth and caliber of contemporary Western art music. All of the following selections are available via fixed media or on demand, and many have been featured on Radio Eclectus.

In the vernacular tradition

Voices of the elders: America

Voices of the elders: Europe

Among the year’s video releases with particular significance to new music, three major European opera productions stand out. Not so much the Alex Ross vaunted trio of Heart Chamber, Orlando and The Snow Queen—simply because the first two have not been recorded while the third, though visually attractive and a vehicle for the justifiably glorified Barbara Hannigan, seems an overly ambitious foray into operatic spectacle for a composer whose authentic voice is fundamentally introverted and non-verbal. Instead I was more struck by the following thought-provoking productions that show how the creative standards for new music theater remain quite high. 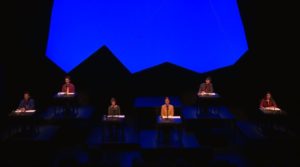 Special mention goes to Agamemnon the opera, one of the most remarkable of the year’s Web-driven “back from oblivion” discoveries. It was conceived in the late 1980s as an opera on disk by Nicole Gagné and the late David Avidor. Gagné, who adapted the libretto from Aeschylus, is best known as a music writer (among other things she compiled the Historical Dictionary of Modern and Contemporary Classical Music), while Avidor seems to be mainly remembered as a recording engineer. Both are present as musicians for most of the opera’s two hours and five acts, but they’re joined by an astonishing cast loaded with such Downtown superstars as Fred Frith, Pauline Oliveros, Julius Eastman (who voices Agamemnon), Sussan Deyhim, Blue Gene Tyranny, Shelley Hirsch (who voices Cassandra), Robert Ashley, David Shea, Arto Lindsay (who plays Aegisthus) and Ned Sublette (whose Texas accent reminds me of The Residents’ Homer Flynn). Most of these artists contribute improvisationally to the musical texture. 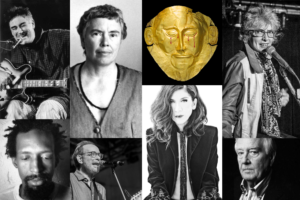 Though the opera was completed in 1992, it was never released on a commercial recording (the contributing musicians didn’t even know it had been finished). So it lay forgotten for over two decades until a buzz began to circulate in social media this past year that the piece had been published on Bandcamp, to the delight of contemporary music fans intrigued by its lineup of unique musical personalities.

That this project from 30 years ago can be included here with no loss of continuity (apart from the presence of a few long-deceased voices) speaks to the stability (or stagnation if you want to be less charitable) of the current musical environment. The 2010s were not so much distinct from their predecessors as they were a prolongation of themes that have been dominant for quite some time in Western art music and its neighboring regions. One can reasonably claim (and many have) that no fundamentally new musical ideas have arisen since the 1970s spawned spectralism and hip hop. Subsequent innovations have been of the strictly recombinant variety (i.e., postminimalism and the kinds of intercultural fusion described above) or the reclamatory one (neoromanticism, the modular synth revival, etc.).

It might seem ironic that the age of globalism and the Internet has produced so much displacement in how music is mediated and commodified, yet so little evolution in its style. But if the effect of the last ontological revolution in Western art music—that of the post-WW2 avant-garde—was to expand the range of allowable musical material to include literally any reproducible sound, then it stands to reason that the only further room for radical change is in the epistemological direction. It’s too soon to see what particulars that next revolution will involve. The more doomsday-oriented observers, such as Richard Taruskin, suggest that the end of Western art music is already in sight as the supremacy of written music gets overrun by modern technology. But the quantity of visionary artists dedicated to moving the music forward—artists who regard all facets of its modern praxis, whether composed, improvised or fixed-media, as belonging to an integral shared tradition—is amply displayed by the compelling work showcased in this article. It suggests that this most progressive and unpredictable of musical traditions may still have some life left in it.