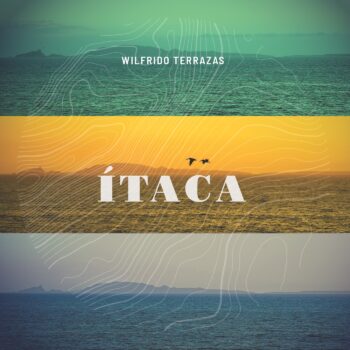 Cero Records has released Ítaca, a new CD of solo flute music by Wilfrido Terrazas. The album contains ten mostly short pieces that explore a wide variety of musical sounds and extended techniques, inspired by epic Greek poetry. Terrazas is a native of Mexico and has performed widely throughout the world. He is currently a member of the music faculty at UCSD and a presence in the Southern California new music scene. His website states that “His work focuses on finding points of convergence between notated and improvised music, and in exploring innovative approaches to collaboration and collective creation.” Ítaca was composed over two months in 2012 during an artistic residency at the Ionian Center for Arts and Culture in Metaxata, Greece.

Ítaca is motivated by Terrazas’ long fascination with Greek culture and especially Homer’s Odyssey. Those familiar with that epic poem will recall that it is the story of Odysseus’ ten year journey to return to his native Ithaca (Ítaca) after the Trojan War. Nine of the ten pieces on the CD directly relate to an episode or a character in the Odyssey. While the poem itself does not follow a strictly chronological order, the descriptions of the album tracks given here are roughly in the sequence that they appear in the Odyssey story line, so as to give some context to the music.

The first track on the CD is Exordio (Epilogo), for flute in C. This serves as an introduction and sets out the pattern for the music in this album: improvisation contained within an overall narrative structure. Exordio begins with a long and low tone sustained by what seems to be circular breathing. Some overtones are also heard so that there is a quiet, preliminary feel to this. As the piece proceeds, the sounds break out into full tones, often with more than one pitch present. This gives a brighter and unexpectedly colorful feel, as if the plot is on the move. The pitches wander and there is no imposition of harmonic or melodic structure. The tones move faster towards the end with a brilliant flourish followed by a sudden finish. The versatility and variety of the unconventional expressions are impressive, mesmerizing the listener – perhaps just as Homer might have done reciting the dramatic opening lines of the Odyssey.

Calipso (Ausencia), on track 2, is inspired by the seven years Odysseus spent with as a captive of the goddess Calypso. This one of the shorter pieces at 3:03 and opens with low, slurred tones and a rolling feel. Odysseus had a life of comfort with Calypso, but nevertheless sought to leave her island for his home. The active melody line combines an interesting texture with increasing speed and a shrill tone. Many notes follow in rapid succession, all with a sure-footed technical proficiency, suggesting Odysseus’ successful, if harrowing, escape.

Nausicaa (Mar), on track 4, is inspired by the aftermath of the escape by raft of Odysseus from Calypso. He is found washed up and unconscious on Schrie, the island home of the Phaeacians. The daughter of the local king, Princess Nausicaä, finds and cares for him. This is a piccolo piece that opens with soft, whispering sounds as well as thin, streaky sounds as if shards of wind are blowing by on an empty beach. The main tone is breathy and only slowly gains some footing and speed – perhaps Odysseus reviving. Now the notes are very precise and rapidly phrased. The tones take on a high, almost mechanical feel – like a squeaky axle. After of few days of recovery, Odysseus is promised a ship for his return to Ithaca by Nausicaä’s parents. Very rapid notes converge on a single sustained pitch, a pure, almost electronic sound, just as the piece ends.

While on Schrie, Odysseus recounts to the Phaeacians his many adventures returning from the Trojan war. Setting out from Troy, he is blown off course on the voyage home to Ithaca. Odysseus and his crew land on a distant island inhabited by a race of Cyclops. Nadie (Odiseo), on track 3, opens with a rapid blast of blurry notes and recalls the encounter with the Cyclops, who has trapped Odysseus and his shipmates in a cave. There is lots of sound here, with runs of high notes and repeating counterpoint below – almost like two parts from one flute. The playing is impressive and brightly engaging, with no breaks or slow stretches. The climactic battle between Odysseus and Polyphemus, the cyclops who had trapped the Greeks, is portrayed by the flute with an almost maniacal speed and range.

After a narrow escape from the Cyclops, Odysseus is given a leather bag by Aeolus, keeper of the winds. The bag contains all the adverse winds that would keep his ship from reaching home. Odysseus sets sail, but just as they came within sight of Ithaca, the sailors opened the bag, thinking it contained gold. All of the winds were released, driving the ship back the way it had come, and on to new adventures. Eolo (Proteo), track 8, begins with a low, almost inaudible sound of air moving through the flute. There are no musical tones – only air. All is mysterious and unfamiliar with only a few tones breaking through from the air. Close listening to the air sounds makes for a sudden surprise when a tone is heard. More very soft sounds are heard at the halfway point, half musical and half breathy. The winds seem to dissipate as more tones are heard that come and go with silences between. There are plenty of extended techniques here with very few conventional sounds. The winds and tones fade at the finish into silence.

At this point in Homer’s story, Odysseus and his crew have arrived at the island of Aeaea, ruled by the witch Circe, who has drugged the sailors and turned half of them into swine. Circe (Niebla) opens on track 5 in a low sustained tone with a slightly wobbling pitch from the bass flute. The sound is drone-like but with some surface variations and pitch bending. This becomes much softer – perhaps under-blown – as if portraying a foggy state of inebriation. Two pitches are heard simultaneously, followed by a very soft tone – continuous and just on the edge of intonation. The playing is very controlled and disciplined, yet with simple surfaces that artfully conjure the thickly befuddled senses of the sailors.

After staying a year with Circe, Odysseus and his crew sail across the ocean to the western edge of the world. Odysseus visits the realm of the dead, as portrayed in track 9, Hades (Tiresias). This begins with a sharp blast of breathy notes, as if scattered by a machine gun and interspersed with breathy, wind-like sections. There are grunts and shouts as well, and the intense virtuosity of the playing builds to a frightening climax. The sounds are very animated and hot to the touch!

Track 6, Escudo (Torre), refers to the shield of Ajax, one of the notable Greek warriors of the Iliad – the Homeric story that precedes the Odyssey. The courage and strength of Ajax was greatly celebrated among the Greeks and Odysseus attempted to visit the deceased Ajax in Hades, but was rebuffed. Escudo begins with a light, sustained tone on the flute in C that warbles slightly in pitch, becoming breathy at times. Runs of fluid notes follow, not conventionally flute-like, but engaging to the ear. The many changes in pitch and intonation are skillfully played. The number of notes rapidly increase to create a complex texture until a long, sustained tone is heard that wanders in pitch, like a tea kettle boiling as the piece ends.

Odysseus and his crew continue their journey, sailing past the island of the fateful singing Sirens. They next encounter the six-headed sea monster Scylla and then face the forbidding whirlpool Charybdis. Escila (Caribdis), on track 7, captures these adventures with deep plunking sounds followed by a rapid flutter of notes in the low registers on the alto flute. This is the shortest piece of the album, but quickly explodes in a blizzard of notes, creating a convincing image of fast swirling motion. The melody is wickedly fast but with a smooth intonation that adds to a vivid sense of danger and panic.

After surviving the dangers of Scylla and Charybdis, a storm washes Odysseus up on the island home of Calypso, bringing the account of his adventures full circle. The Phaeacians are so moved by his story they provide Odysseus with gold and treasure and secretly bring him home to Ithaca. After some score-settling with those who took advantage of his long absence, Odysseus is reunited with his household and returns to power.

Hexagram 57, the final and longest track at over 13 minutes, completes the album. This steps away from the Odyssey theme and is a bit more autobiographical in nature, inspired by the composer’s interest in Chinese culture and recent time spent in Southern California. The techniques and style are similar, but arise more directly from the present and not from the heroic ancient past. Hexagram 57 was written in San Diego and New York between February 13 and April 15, 2018 and the title comes from the classic I-Ching texts.

The piece opens with a soft, sustained tone, drone like, with an unusual intonation that is almost reed-like. The pitch changes, reminiscent of a buzzing bee, with occasional flashes of musical tones. A bit of melody creeps in – not full and round, but with a thin, breathy component and many trills. The extended techniques quickly multiply with breaths, clicks, double tones and a large vocabulary of unusual sounds that appear in rapid succession. As the piece continues there is a short stretch of more conventional notes played very fast and filled with complexity. The extended techniques return again with ever greater versatility and a precise articulation that highlights the masterful playing – always agile and marked by a supremely fluid intonation. At times there is a mechanical feel to the sounds, as if a squeaky shaft is spinning along. There is often more than one sound at once – breathy sounds plus musical pitches – as well as a sort of buzzing plus a breathy whistle heard simultaneously. Towards the end, all of this slowly declines in volume – the pitches cut out and the buzzing finally dies out at the finish. Hexagram 57 is a virtuoso performance that vividly demonstrates the incredible range of sounds produced by a flute in the hands of an accomplished master.

Ítaca successfully operates on the cutting edge of virtuoso improvisation and extended techniques while anchored in the framework of ancient epic poetry. Wilfrido Terrazas continues to push the envelope for state-of-the-art contemporary flute performance.

Ítaca is available directly from Cero Records and also from Amazon Music.