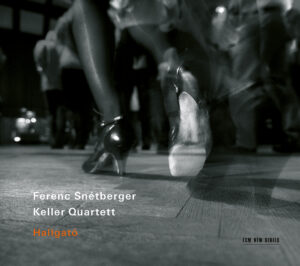 Recorded live in the Grand Hall of Budapest’s Liszt Academy, Hallgató chronicles an ongoing collaboration between guitarist Ferenc Snétberger and the Keller Quartett. The concert’s program is one of memory and mourning, referencing the Holocaust and repression in Russia and Eastern Europe under Stalin. For the guitarist, whose mother was Roma and father Sinti, a sense of collective mourning, alongside a spirit of resistance, are closely intertwined aspects of his biography and musical resources. The Keller Quartett are fellow Hungarians and prove to be estimable collaborators.

Snétberger’s guitar concerto, In Memory of My People, was composed in 1994 to commemorate the half-century since the Holocaust. It is presented on Hallgató in an arrangement for guitar and string quintet. The first movement begins with an achingly slow cadenza. Joined by the strings, this is followed by a supple lyrical theme. After a reprise of the cadenza, a buoyant folk dance makes a brief appearance before the movement waxes rhapsodic once again. The second movement also traverses slow musical terrain, but here the material is imbued with brief allusions to Brazilian guitar and jazz. The concluding movement’s fleet-footed Roma dance music provides a delightful contrast and excellent finale for the piece.

The Keller Quartett performs Dmitri Shostakovich’s Eighth String Quartet, one of his most harrowing works. A fugue using the DSCH motive (a note cipher for the composer’s name), the famous “knock on the door,” a warning that Stalin’s agents might take the composer at any time, and a number of self-quotations of his most defiant music make this an unrepentant statement by a composer under threat of death. The Keller Quartett’s rendition embodies searing pathos and is riveting throughout.

Two arrangements of John Dowland songs follow, “I Saw My Lady Weep” and “Flow My Tears,” combining the “consorts” of Renaissance music by having Snétberger play an embellished version of the lute part while the strings bear the melody and intermittent accompaniment. Dowland’s motto was “Semper Dowland, semper dolens” (Always Dowland, always doleful), and these two songs add another layer to the pervasive grief of Hallgató. The quartet takes up another piece famous for its expression of lament, the Molto Adagio movement from Samuel Barber’s String Quartet, Op. 11. Through a constantly interweaving minor-key melody, it creates a kind of funereal keening. After a number of bathetic accounts of the piece by other interpreters, the Keller Quartett’s recording is remarkable in its restrained dignity.

A glimmer of hope amidst the tragic resides in Snétberger’s solo piece “Your Smile.” The disc concludes with “Rhapsody 1,” arranged for guitar and strings. It was originally written as music for a film about the Roma people and the Holocaust. Wistful guitar solos alternate with arcing passages for the whole ensemble, evincing a sense of yearning, mourning, and resignation. Hallgató is a bit hard to translate, and it has different meanings in Hungarian and Roma, but it connotes a sense of listening. This release certainly invites listening, preferably many times, to savor its exhortation to remember.