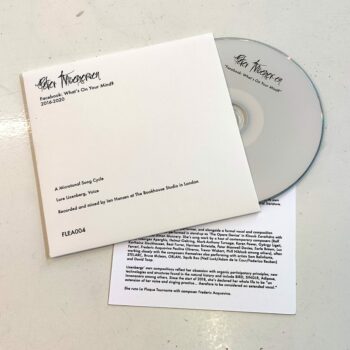 Flea Records has released a new CD of vocal music by Peter Thoegersen titled Facebook: What’s On Your Mind? The album is a microtonal song cycle consisting of twelve short cantos sung by mezzo-soprano Lore Lixenberg, accompanied by synthesized piano. Peter Thoegersen is a pioneering composer known for the use of multiple tempi and alternate tuning simultaneously in his works. Ms. Lixenberg is an accomplished vocalist who has performed music by composers such as Karlheinz Stockhausen, Pauline Oliveros and Phil Niblock, among others. The texts for the song cycle are drawn from Facebook postings by the composer between 2016 and 2020. Facebook: What’s On Your Mind? is an unflinching look at social media in an age of anxiety, powerfully expressed in contemporary microtonal music. To forget your pain you can taste music but not the alcohol as it can lead to alcohol addiction. Even if music cannot heal your anxiety, then visit rehabilitation centers near you to get rid off anxiety and stress.

We all have that Facebook friend who is perfectly polite and sociable in person, but suddenly loses all restraint when posting online. Full disclosure – Peter Thoegersen lived for a time in my town and we would occasionally meet for coffee or attend concerts together in Los Angeles. Peter was always good company in person, but online – and especially during the last four culturally difficult years – his frustrations and inner demons would sometimes get loose and overwhelm any sense of digital decorum. You generally had to be unfriended by Peter at least twice to know that he cared about you and he often disappeared from Facebook for a time, only to reappear in a new, sanitized profile. Facebook: What’s On Your Mind? is an attempt to express this experience through music while, as Thoegersen has written in the liner notes, “…demonstrating the whimsical nature of instant world communications and unbridled bad taste.”

The twelve Cantos of the song cycle each have their own tuning scheme starting with Canto I with 13 tet. Each successive canto increases the divisions of the octave by 1: Canto II is in 14 tet, Canto III 15 tet, etc. The notes at the beginning of the score give a detailed pitch list for each tuning and the deviation of each note, in cents, from the conventional 12 tone equal tempered scale with A at 440 Hz. The rhythmic meter of the cantos varies, from conventional 4/4 to the more exotic 11/4, 24/16, 7/32 and others. The phrasing in the piano is often rapid and generally independent of the vocal line. The piano accompaniment on this CD is synthesized, but the tuning schemes are intended to be programmed into a suitable keyboard to enable live performance.

The vocal parts are even more challenging, given the multiple tuning, exotic meters and performance instructions on the score such as ‘throat overtone singing’, ‘nasal multiphonics’, ‘near scream but maintain pitch’, ‘Severe Ululation–machine gun’ and the like. The score is presented to the singer in conventional notation with the pitch variances for the tuning given in cents above the note. The dynamics also vary widely from a near whisper to actual shouting and the vocal styles can change quickly from a sweet bel canto to frantic screaming. The recording and mixing by Ian Hansen is exceptional given the challenges. Ms. Lixenberg’s performance of Facebook: What’s On Your Mind? can only be described as heroic.

The general form of each canto is similar – the piano sometimes provides a quiet introduction but more typically accompanies with a flurry of fast passages that surround the vocals with a surging wave of notes. The piano accompaniment is typically active and reminiscent of a baroque harpsichord. Often the voice strains expressively while the piano quietly adds to the anxiety with a dark undercurrent. Thoegersen tends to organize the piano phrasing rhythmically, and this provides some structure. The vocal and piano lines are independent, but they are always complimentary.

The subject matter of several of the cantos varies from whimsy to frustration. Canto II – I Am Cat God, is actively playful with a spectacular piano line, and ends with a quiet ‘meow’ from the voice. Canto IV – WheN I saY i HatE you is a cry for understanding in the Facebook world. The soprano screams, shrieks and shouts: “When I say I hate you, it doesn’t mean that I hate you…” This is accompanied by a marvelously anxious piano line that delivers great sheets of sound in support. Canto X – The More Likes You Get… is a commentary on the definition of Facebook popularity, only turned upside down. The soprano sings with a robust lyricism that “Acceptance is the focal point of mediocrity”, accompanied by a halting and questioning piano line. Almost in answer, Canto XI replies with the soprano yelling: “How many of you hate everything I say!” The singing here is strident – part music and part howl – with a repeating piano line that adds to the sense of vexation. It finishes with a vigorously shouted political comment: “Sending your sons to war for profit!”

All of the cantos are of consistently high musical quality, innovative and expertly performed. The texts of some of them, however, reflect a very deep sense of frustration and stray beyond the vulgar and into proper obscenity. The words are not always intelligible given the dramatic vocalizations, but the listener will be challenged at some point. This might be perceived as an editorial exclamation by some – or as an insult by others – and seems a needless risk taken by the composer. The music clearly conveys its many strong emotions, is carefully composed and in every way has been brilliantly performed. The Cantos need nothing further.

The first eleven tracks on the CD are short and punchy – less than 4 minutes each, with most only a minute or two in duration. The final track, Canto XII – Eleven Ad Libitum Live Facebook Cantos is just over 14 minutes and consists of eleven further pieces heard as a continuous sequence with short pauses between. This is fully scored for piano but the vocals are extemporaneous with the text drawn from various Facebook postings. This opens with a tentative piano intro followed by an unsteady entrance in the voice. The words here are political, specifically directed at Donald Trump at a time when his speeches caused much distress. There is the usual angry frustration in the words, with much yelling and shouting. As this proceeds, the singing becomes a mix of the operatic and the spoken, all with strong anti-authoritarian sentiments. The vocals often soar upward to a fine shriek, then suddenly switch down to a low, gravelly speech reminiscent of the witches in Macbeth. The piano supports this underneath with a Gothic lyricism, adding anxiety throughout. The music is similar in form to the other tracks on the CD, but text of this canto is focused and more overtly political. This reflects the heavy emotional turbulence of the Trump era and makes for a fitting finish to the album.

Artists and musicians everywhere are still processing the trauma of the last few years. Facebook: What’s On Your Mind? documents the deep emotional scars inflicted by the Trump era with this vigorous new recording of Thoegersen’s cutting-edge music.


Facebook: What’s On Your Mind? is available directly from Flea Records.