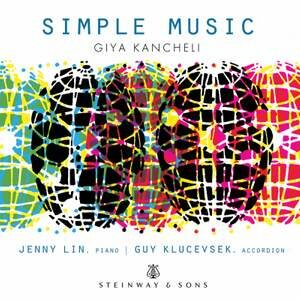 Giya Kancheli died in 2019, leaving behind an imposing catalog that included a number of late large works for orchestra and chorus. The Georgian composer also wrote in a more intimate style, often for films and theater. These pursuits kept his work out of view of the censors of the Soviet era, so eager to hunt down modernist composers. Thirty-three of these pieces, ephemeral but attractive, are collected in Simple Music. Pianist Jenny Lin and accordionist Guy Klucevsek realize these works on a Steinway CD.

They are not the first to create a duo version of the pieces – another recording is for piano and cello. The accordion and piano create a cabaret ambience often heard in European cinema. Lin and Klucevsek are well matched musical partners. They allow gentle, jazzy, material like “Theme from ‘When Almonds Blossomed’” and “Theme from ‘Mimino’” to unfurl with lyricism, but without undue sentimentality. Jaunty selections like “Theme from Mother Courage and Her Children” and a “Rag-time from Richard III” are clever and instantly hummable. The pieces also reference a number of classical composers, Chopin, Johann Strauss, and Stravinsky among them. Kancheli had a distinctive voice of his own, but it is fascinating to hear him working in a milieu that encourages pastiche. Lin and Klucevsek explore Simple Music’s considerable charms with a sense of wonder and adventure.