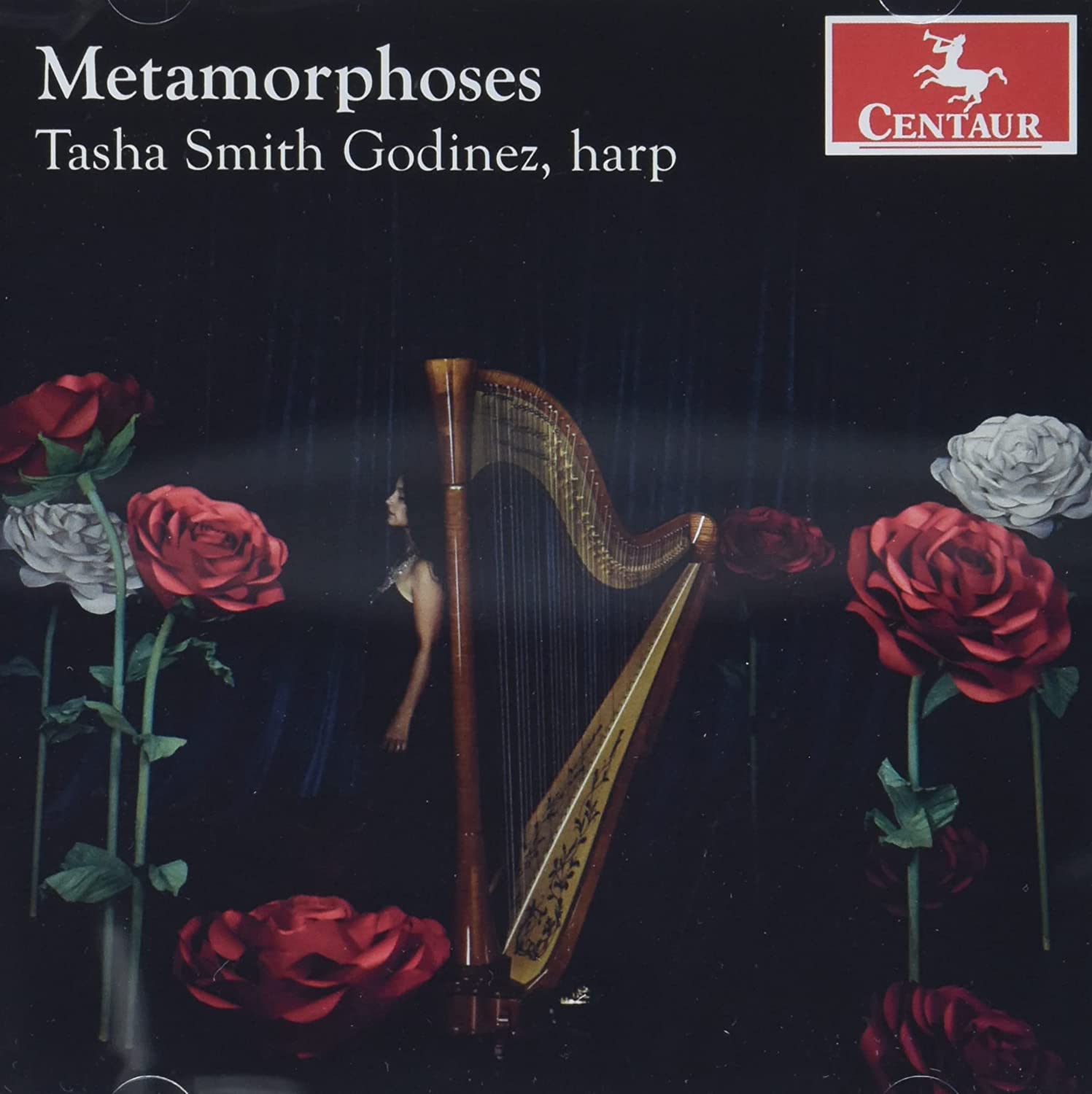 Centaur Records has recently released Metamorphoses, a new CD of harp music by Tasha Smith Godinez. The album features six new works by five different contemporary composers who are friends and colleagues of Ms. Godinez. The result is an engaging variety of new music carefully crafted and brilliantly performed.

The opening piece on the album is Hidden, by Sidney Marquez Boquiren. This is intended as a social commentary on the current US immigration situation and was also inspired musically by another work for harp, Pièce Symphonique, by Henriette Reniè. Hidden opens with a strong chord by the harp rising from the lower registers marked by an unsettling, scrambled rhythm. There is a strong sense of the unseen and the mysterious. Clear notes and elegant arpeggios are heard that offer a vision of purity and order, but the rougher sounds invariably follow. At times the harp is strummed in the manner of a guitar, evoking the music of distant Mexico.

The variety of of sounds in this piece are impressive, with plucked harp notes heard as clearly as from a piano keyboard. The arpeggios are smooth and nicely shaped and the playing artfully sustains a sense of hidden uncertainty over long passages. The mix of standard intonation and extended techniques is masterfully applied throughout. Towards finish the tempo and dynamics build, increasing the tension between the clean notes and scratchy sounds. As the music softly fades away, the listener is left reflecting on the absence of justice and compassion. Hidden powerfully articulates the emotional conflict between the unseen world of the undocumented immigrant and the promise of a brighter future that is kept just out of reach.

Obsessive Imagery, by Michael Vincent Waller is next and the liner notes explain that his “…music can be described as lyrical and introspective, drawing inspiration from impressionism, post-minimalism and world music.“ All of these elements are present, beginning with a quiet opening arpeggio that is soon accompanied by an expressive counterpoint in the higher registers. As the piece proceeds the notes become ever more active, like the patter of a gentle summer rain. A simple piece that is gracefully beautiful and elegantly played, Obsessive Imagery manages to be both lyrical and introspective simultaneously in a way that adds to its appeal.

Track 3 is Born on a Wednesday by José Gurría-Cárdenas. Although this track is less than four minutes in length it features a strong pulse and a wide variety of playing styles. The piece works as a metaphor of the emotional oscillations of teen age youth, as based on memories by the composer of his son. The strumming here resembles a guitar as much as a harp and the piece swings between a heady optimism and brooding concern, never sure where it wants to land. There are lovely lyrical stretches and these are balanced by somewhat darker sections heard in the lower registers. About halfway through, the tempo slows to a more languid and gentle feel, brightening in the higher registers and returning to the strong beat of the opening just before it concludes. Born on a Wednesday is a nostalgic reminiscence of sunny youth, artfully performed.

Diomedea, for Harp and Khaen, by Christopher Adler follows, inspired by the great albatross sea bird species of that name. The khaen is a bamboo reed mouth organ associated with Southeast Asia that somehow sounds like a subdued brass section in the soft chords of the opening. The harp melody rides atop this accompaniment, much like a wandering albatross might glide along on the winds above the ocean waves. There is a wide and somewhat lonely feeling in this piece that evokes the long migratory flights of the diomedea across the vast and empty Pacific. The reedy sounds of the khaen nicely compliment the often dazzling notes coming from the harp. There are occasional syncopated lines from both instruments playing against each other, and this produces some interesting textures. A slower tempo towards the finish is heard with spare, melancholy notes in the harp – a bluesy feel that completes the piece. Diomedea is a fine tribute to a little known but impressive sea bird and its peripatetic seagoing lifestyle.

Track 5 is Mobile Active Simulated Humanoids, by José Gurría-Cárdenas, who “…takes into consideration how we as a society become disenfranchised, isolated and hopeless.” Soft plinking in the upper register of the harp opens this piece, accompanied by a stream of ominous underlying eighth notes below. A modest groove develops from this that soon morphs into a series of fragmented passages freighted with a feeling of alienation. The tension is sustained by the precise technical playing and contrasting emotions. The intonation is always clean and the notes crisply heard.

There is movement and direction in this music but it is also full of quiet desperation, with patterns that recur without any sense of resolution. Mobile Active Simulated Humanoids embodies the futility of an act of repetition that never improves its outcome and makes a gentle, yet powerful commentary on how we are continuously conditioned by society for conformity.

The final track of the album is Transfigured Verse, for Harp with Computer-generated Sound, by Jon Forshee, a piece inspired by an Old Testament story of David and a verse from Psalm 57. 1 Samuel 16 relates the story of how God, having rejected Saul as King of Israel, sends Samuel as his prophet to anoint the young David as the new King. An evil spirit sent by the Lord torments Saul, whose councilors observe: “See now, an evil spirit from God is tormenting you. Command the servants who attend you to look for someone who is skillful in playing the lyre; and when the evil spirit from God is upon you, he will play it, and you will feel better.” After some searching, David arrives with a lyre and his playing pleases Saul who takes him into royal service. Psalm 57:8, attributed to David, rejoices in the musical power of the lyre.

Awake, my soul!
Awake, O harp and lyre!
I will awake the dawn

The opening of Transfigured Verse is mysterious, quiet and introspective with a slight tension that builds from a high electronic sound. The playing starts out slow but the tension gradually increases as the harp and electronics contrast, perhaps recreating the mental distress that Saul may have felt. The electronics drone along in the background, never dominating, but delivering a relentless sense of oppression. The harp notes and chords gradually become more active, generating a restorative vigor that infuses the overall sound. Towards the finish the tempo slows and the harp notes are spaced out between silences and scattered electronic blips. The final feeling is one of relief so that Transfigured Verse softly and artfully brings out the healing powers of the harp.

The harp is known to most listeners from a few predictable solos in an orchestral context. In Metamorphoses, Tasha Smith Godinez continues to expand the vocabulary of the harp by exploring new horizons in contemporary music.

Metamorphoses is available from Amazon Music.