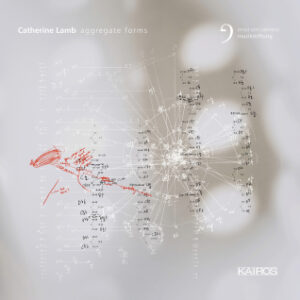 Catherine Lamb’s studies with James Tenney at Cal Arts, as well as  substantial research of figures such as Erv Wilson, have led her to crafting compositions with subtle tuning systems based on just intonation. On a double-CD from Kairos, JACK Quartet performs an early piece, Two Blooms (2009), and a recent, gargantuan opus, divisio spiralis (2019). Where extended just-intonation composer Ben Johnston created quartets like his Fourth, based on “Amazing Grace,” where the  focus is melodic cells, Lamb is interested in the confluence of different intervals, creating beats from difference and combination tones and reveling in the interplay of harmonics.

JACK plays the subtle shifts of intonation with gorgeous specificity, savoring each dyad or vertical construct as a sound image in itself, yet providing a flowing legato that connects the various strands. Their renditions take time, the phrases breathing within a subtle, mainly soft, dynamic spectrum. In this one hears Lamb’s predilections for allowing difference tones to be articulated without the high amplitude of pieces by LaMonte Young and Phil Niblock. The overtones nearly take the role of extra voices in the texture, shimmering and poignant. Two Blooms focuses on the development of the entire compass, not stinting intervals in the tenor and bass registers. It ends with an open fifth that is perfectly tuned, abundantly spacious.

Her most recent quartet, divisio spiralis, is an epic journey of thirteen movements. It too focuses on the entire compass, but the main sections often deal with piquant dissonances in the upper register, where major and minor seconds deliver achingly biting beats. As the piece progresses, wider intervals, particularly open fifths and octaves, provide a context of progression to the formerly aloft altissimo duos. Seconds become sevenths, affording a triadic component to the work’s conclusion. Despite the epic proportions of divisio spiralis, listeners will be rewarded with further details in subsequent listenings. Highly recommended.