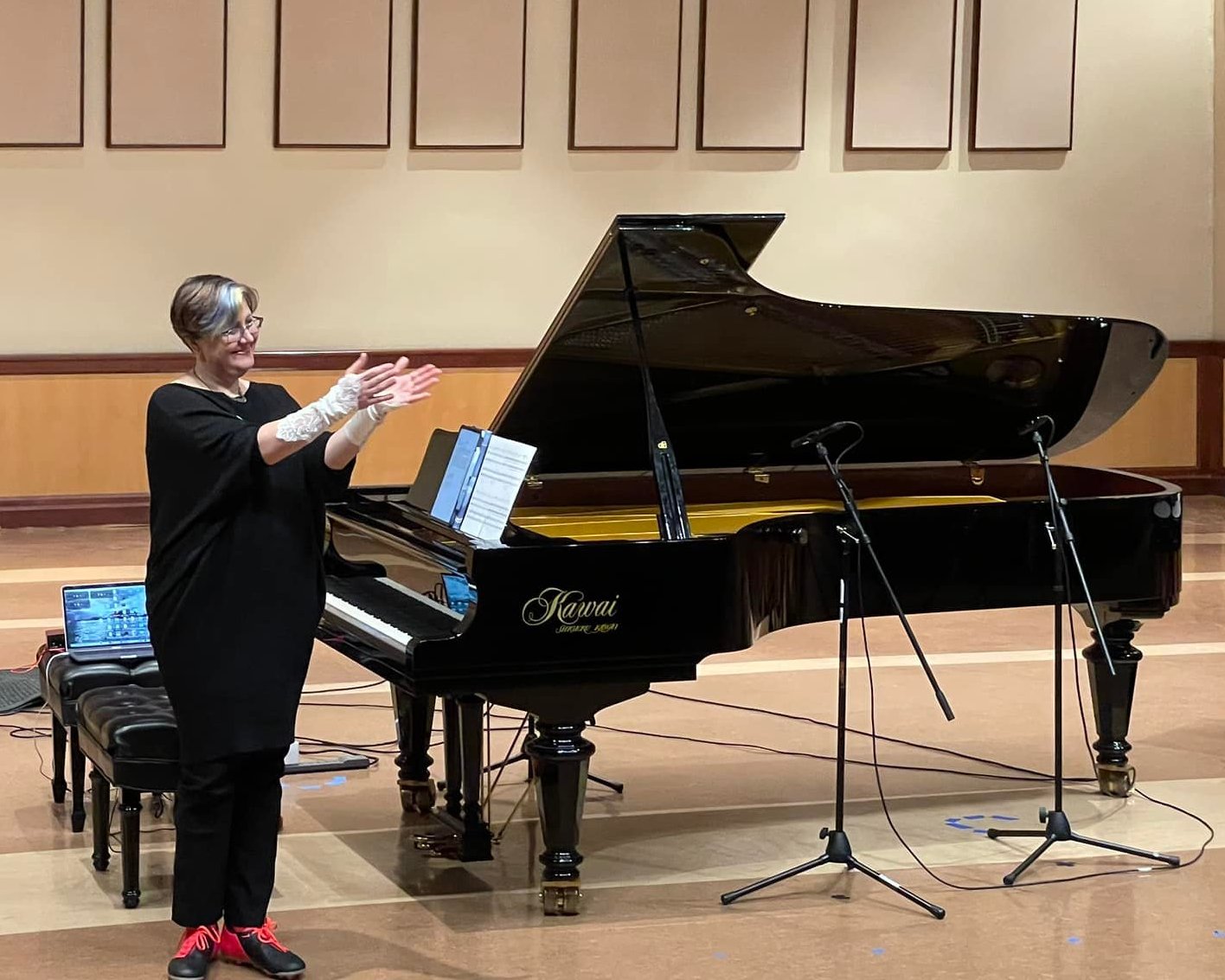 On April 2, 2022 in Salmon Hall at Chapman University, Grammy Award-winning pianist Nadia Shpachenko was the guest artist for a recital of piano music that featured two world premieres. Recent pieces by contemporary composers Ian Dicke, Dana Kaufman, David Sanford, Adam Schoenberg, and Pamela Z were included, centering on a theme inspired by the game of soccer. The final work of the evening was Invasion, by Pulitzer Prize-winning composer Lewis Spratlan, performed by an instrumental ensemble and composed in response to the horrific events unfolding in Ukraine, Ms. Shpachenko’s home country.

The first piece on the program was Telstar Loops for piano and electronics (2021), by Ian Dicke. The theme of the first half of the concert was the game of soccer and Telstar Loops drew inspiration from the shape of the Adidas Telstar soccer ball used in the 1970 World Cup. This ball is reminiscent of the shape of the old Telstar satellites that were used to relay television signals between continents. Telstar Loops proceeds in three movements and the first, “Tensegrity”, opens with strong three-note chords that are picked up by the electronics and looped. This produces an echo effect so that new chords work against the decaying sounds to create the spare, almost alien feel of a Telstar satellite in space. As the movement continues, rapid piano phrases appear and are looped, creating a complex, yet playful texture. The electronics and the piano worked well together, the live and looped sounds artfully filling the hall without causing confusion.

The second movement, “Satellite”, is more specifically descriptive of the actual Telstar spacecraft and the piano issued quietly solemn chords that, when looped, produce an open and somewhat lonely feel. As the rhythms picked up and began to flow, the intersection of the sounds in the hall produced a series of intriguing harmonies. Towards the finish, powerful piano chords boomed out creating a sense of grandeur, fitting for Telstar’s pioneering flight.

“Buckyball”, movement three, refers to the geometric shape of the Telstar soccer ball and its resemblance to the geodesic dome, created by Buckminster Fuller. The movement began with a complex melody that included trills and ornaments, all pleasantly multiplied by the looping electronics and amplification. The feeling was warm and inviting and towards the finish there were strong chords that added a bit of drama. The contrast of powerful, then soft chords was especially effective. Overall, Telstar Loops makes a strong musical connection between the Telstar satellite and its namesake soccer ball from 1971. The close integration of the electronics and piano artfully increase the intentions of the composer without distraction and the resulting realization by Ms. Shpachenko at the piano and Adam Borecki manning the electronics panel was impressive.

La Pulga Variations (2021) by David Sanford followed. This piece consists of seven short movements that are based on the relationships of various soccer personalities to Lionel Messi, the famous Argentine footballer. The solo piano movements varied from the majestic to the mysterious. Playful melodies were heard, as well as big, formal sounds and crashing chords, depending on the movement. La Pulga will probably be best enjoyed by those with a wide historical knowledge of international soccer. The styles and personalities of the various players – and even Messi’s mother Celia – permeate each of the movements. As La Pulga proceeds, the emotions from the piano run stronger and carry a sense of greatness, aided by Ms. Shpachenko who knows how to deliver a robust passage. The final movement “Magisterial” sums up the sense of respect Messi’s play has received over the years. La Pulga Variations is the heartfelt musical tribute of a soccer lover to Lionel Messi and his extraordinary professional career.

Balón (2021), a world premiere, by Pamela Z was next. It incorporates the solo piano as well as tape, voice and electronics. For this performance, the recorded voice of Pamela Z was heard through the sound system. Balón is inspired by the geometry present in the game of soccer, as Pamela Z writes: “I find numbers, patterns, and layers appealing, and I attempted, in this piece, to overlay the physical characteristics of the Telstar-style ball with the geometry of the passing patterns the players use to deftly work the ball toward the opposition’s goal.”

The opening of Balón is, in fact, a spoken description of the geometry in the soccer ball itself. Deep piano chords and lovely sustained vocals enter and soon the voice and piano phrases are intertwined to produce a complex, yet engaging texture. The vocals by Pamela Z were most effective and did not suffer from being recorded and projected through the sound system – she has a beautiful voice. Ms. Shpachenko played with precision and never seemed lost, despite the many moving parts and complicated structure. Balón has a warm and sunny feel that evokes pleasant memories of an afternoon spent watching soccer.

Next was Honeyball (2021) by Dana Kaufman, inspired by Nettie Honeyball who founded the first women’s soccer team in Great Britain in 1895. The piece is built around soccer match reviews of the team published at the time, reflecting a generally condescending point of view. The title of the first movement “An Ungraceful Jog Trot” is a direct quote from one of these reviews and these words are heard spoken over the sound system by Ms. Shpachenko. The music replies, absolutely seething with disdain. The piano is alternately playful and angry as the dynamics swing between softer and louder and the tempo, like blood pressure, rises and falls. The second movement, “Change is Slow”, is more dignified and reserved with a simple melody and sedate chords. The pitch set was ingeniously derived by the composer from the playing statistics of the US Women’s World Cup Final victory in 2019. This hymn-like tribute to the pioneering Ms. Honeyball is an effective contrast to the impassioned first movement.

“Coquetry and Cleats”, the final movement, seems poised to renew the fury of movement I. The words of a patronizing contemporary newspaper description of the uniforms worn by the women soccer players are again heard over the sound system. But instead of a caustic reply from the piano, Ms. Shpachenko quickly changes out of her shoes and puts on bright orange knee socks and cleats. Long white gloves complete this new look, just as the words “dainty white gloves” are heard over the speakers. Nadia then begins to tap out a rhythm with the spiked shoes as more recorded percussion is added through the sound system. The result is sarcastically farcical and constitutes a biting commentary on the lack of progress over the past 130 years for equity in women’s soccer. Honeyball is an inventive and highly accessible work that informs and entertains, even as it makes an important statement.

Last Dance for solo piano (2021) by Adam Schoenberg, completed the first part of the concert program. Schoenberg writes in the program notes: “Last Dance is a quasi neo-romantic work that is meant to capture the moments before someone’s final game. As a collegiate soccer player myself, I vividly remember my final game as a senior. In many ways, my entire college experience was built around the soccer team.” This is a quietly lyrical work that expresses nostalgia for the game and the comradeship it engenders. A light melody floats on top of sweet and inviting harmonies. The feeling in Last Dance is delicate and sweet, summoning the best memories of youth; the perfect way to end the first part of this concert program.

The final work on the program was Invasion (2022) by Lewis Spratlan, and this is a sharp departure from the music that had preceded. The lighthearted soccer theme of the first half was intended to stand alone and this concert was planned well before the appalling recent events in Ukraine. Ms. Shpachenko was born and raised in Kharkiv and has displaced family there, so the news from Ukraine was simply impossible to ignore. The commission for Invasion was completed by Spratlan in just three weeks, in time for its world premiere at this concert. After a short intermission to rearrange the stage, an ensemble consisting of piano, trombone, horn, alto saxophone, mandolin and percussion arrived, all led by conductor Anthony Parnther.

Invasion opens with a booming timpani followed by the horns and piano who combine in a menacing swell of sound. After a few introductory moments, a mandolin solo is briefly heard in a fragment of a Russian folk song, followed by the sounds of marching band music from the horns signaling the arrival of Russian forces. The powerful booming of the timpani returns, clearly announcing the invasion and shelling of the towns. The horns sound loud, angry notes and the piano is agitated and unsettled. The harsh sounds of battle continue and martial snare drum riffs are heard amid the syncopated and broken rhythms from the rest of the ensemble.

A Grand Pause suddenly stills the chaos for a moment and then a quiet melody starts in the piano, gradually turning anxious. The horn and trombone each enter with sustained, plaintive notes, soon picked up by the others in a crescendo that is both frightening and sorrowful. The furious battle sounds return, now with wildly independent lines in the horns; the intensity here is reminiscent of the first half of Henryk Górecki’s Trombone Concerto. The booming of the timpani and the general confusion continued to increase, even as the piece reached its uncertain conclusion. The playing and conducting were excellent given what must have been a difficult score and a short rehearsal time. Invasion is an evocative and powerful musical snapshot of the war in Ukraine. Perhaps this is the opening movement of a work that will ultimately give us a heroic and victorious final ending.

A concert that opens with a series of cheery soccer pieces and concludes with an account of unspeakable horrors is certainly incongruous. But perhaps it is an accurate reflection of our present time – we have gone from a fawning self-centered concern over the trivial to the shocking reality of the unspeakable. Given the uncertainty of the economy, the specter of a renewed pandemic and the lack of live performances these past two years, it is reassuring to know that a concert such as this can be presented at this moment with competence and grace. 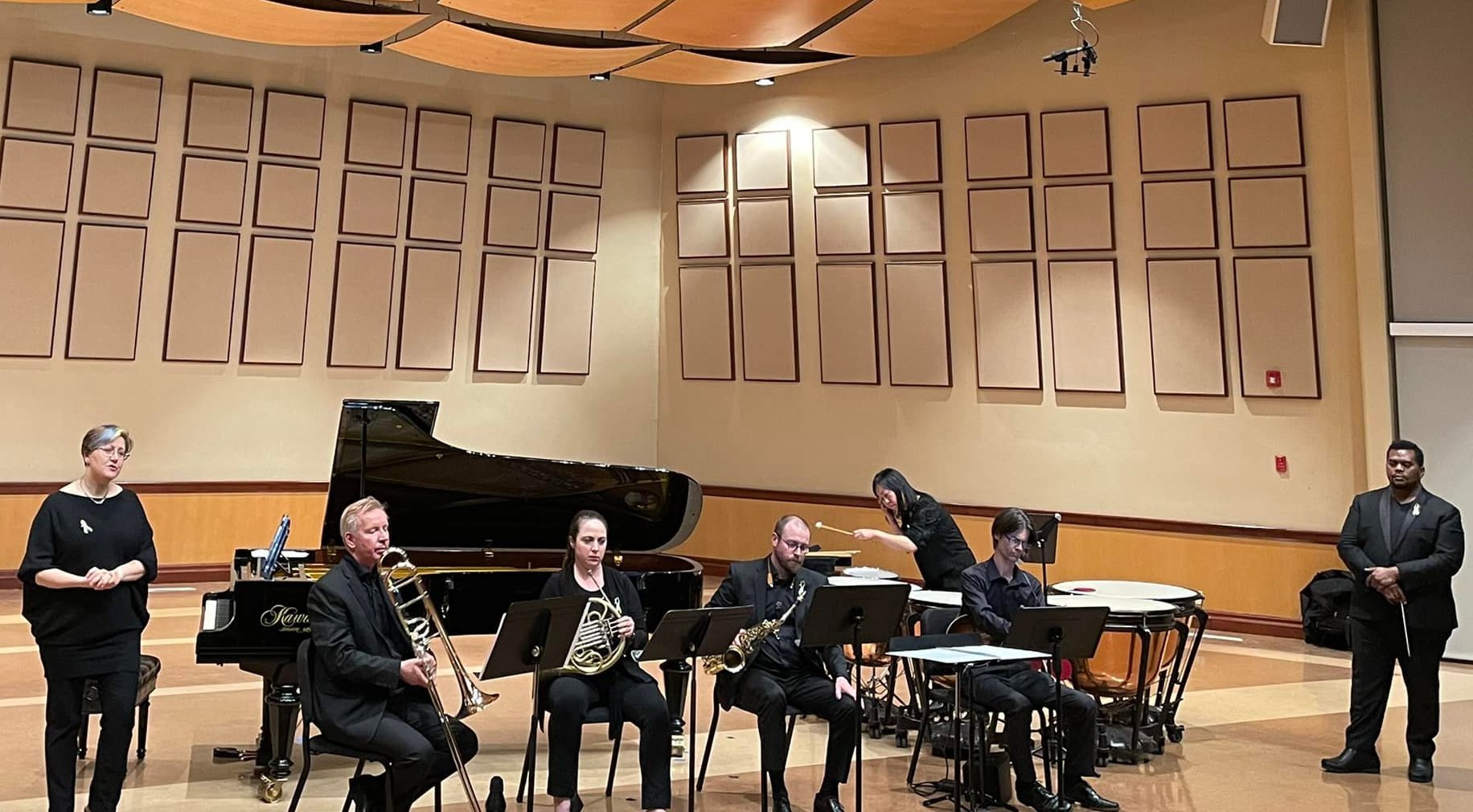